The videotape jihad has been replaced by the YouTube jihad, and the geography of revolution has shifted from Afghanistan to Syria 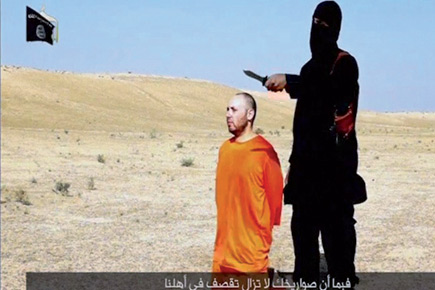 The videotape jihad has been replaced by the YouTube jihad, and the geography of revolution has shifted from Afghanistan to Syria

The forbidding Hindu Kush as backdrop, he sits there, staring at us from that grainy video image, his beard flowing as if he is an angry mountain Jehovah. He is in military camouflage, which merges perfectly with the craggy, monochromatic landscape, and a Kalashnikov, placed just in front of him at arm’s length, is his only companion as he addresses the world in resonant Arabic. The grammar of his sentences is hate; each syllable exudes revenge and remorselessness; and the invocation of a still hungry god makes his sanguineous soliloquy the testament of a man who has pitted himself against the fears and sorrows of a world scalded by an act he vows to repeat. This is the new radical, a figure of control, calm and stillness, talking to you from Mount Jihad.

That was then, when Osama bin Laden, depending on the angle from which you looked at him, was terrorist, warlord, prophet, revolutionary, troglodyte, coward. From his adopted homeland of Afghanistan, the site of this century’s first American war, he, an exile from Saudi Arabia, whose unholy partnership with America he abhorred, made these periodic video appearances to pronounce judgments on a godforsaken world. For the radical Muslim youth and for those perverted legions of “America-called-for-it” glee, he was Islam’s Che, and the caves of Tora Bora were his private Bolivian jungles. For them, the video image of the guerilla jihadi was as inspiring as Alberto Korda’s iconic photograph of Che, still immortalised on T-shirts and posters. He was, for them, an epitome of renunciation and subversion, and in his words merged anti-Americanism, a Quranic alternative, and medieval fury of a deranged mind.

Osama chic had a shorter shelf life. In the end, he, a fugitive, was denied the mythology of martyrdom. It was a subhuman finale, and the burial apparently a watery pastiche of Frederick Forsyth’s Jackal, without the suspense.

The videotape jihad has been replaced by the YouTube jihad, and the geography of revolution has shifted from Afghanistan to Syria. There is no longer the jihadi-in-chief talking to you from Al Jazeera channel, the Emir with the Quran in one hand and the Kalashnikov in the other. Here is the new image of the jihadi chic, a click away on your computer screen:

He is in black robes and black mask, a Halloween phantom of the desert, holding a knife; and kneeling on his right is a man in orange robes, the colour a tribute to those who are condemned to Guantanamo Bay, an American journalist, call him James Foley or Steven Sotloff, waiting for the inevitable. Before the videotaped execution, a ritual death in slow motion, the victim transfers the cause of his death to himself, his country, his president, his history. The victim is being forced to be the owner of his murder: “Obama, your foreign policy of intervention in Iraq was supposed to be for the preservation of American lives and interests. So why is it that I am paying the price of your interference with my life? Am I not an American citizen?” And before the execution, the killer, periodically wagging the knife in his left hand, and in the now familiar British accent, explains himself: “I’m back, Obama, and I’m back because of your arrogant policy towards the Islamic State… So just as your missiles continue to strike our people, our knife will continue to strike the neck of your people.” Then he does it.

Who is this knifer in black, the newest embodiment of jihadi cool? Most likely, he’s not a brainwashed youth from the ghettos of Arabia, driven to the battlefield by the promise of a one-way ticket to paradise. In all probability, he is someone from the West—Britain or Continental Europe or the US—answering the call of radical adventure, exchanging the middle-class drabness of suburbia for swords, guns and Allah. He is, in many ways, different from the majority of Arabs fighting for the Islamic State because he comes from open societies where his Muslim identity has never made him a lesser citizen. He is not the persecuted or the outcast. There are reportedly 12,000 Western fighters like him in Syria for the realisation of the Caliphate. The romance of being the killer and the killed—the cult of battlefield martyrdom—is a beguiling ideal of the jihadi, and this one, lured by the action elsewhere in the desert, leaves the cozy banalities of his world for the war of god. It’s fun.

His jihad is different from Osama’s only in style. Osama, unlike today’s self-chosen Caliph in Mesopotamia, did not have a nation; he had only an idea of justice. The state of homelessness, the quest of the wandering prophet, his easy migration from the riches of Arabia to the trenches of Afghanistan, added to his radical aura. (Still, it must be said that the denouement of the Osama legend featured an ailing fugitive in disguise running for his life, from caves to frontier towns to a safe house in Pakistan to meet his American nemesis.) The new jihadi is at home; the Islamic State, which, comprising parts of Iraq and Syria, is as big as Jordan, with a population of around six million. In the Osama era, revenge, the provenance of which is as old as the Christian era, was a combination of the modern and the medieval— and spectacular. It was apocalypse as breakfast show. For the new jihadi, the hooded butcher, the dangling head of the infidel is the highest trophy. (Remember the hanging body of William Higgins, an American marine captured and killed by Hezbollah? So, they haven’t come a long way, after all.) Faith freezes conscience and strengthens the hand that wields the knife, for who else can kill with such rhythmic slowness catering to the so-called torture-voyeurs of the internet?

The old and the new, though, are united by the Great Shaitan that is America. Long before Osama, there was the founding father of the Great Islamic Revolution, and Ayatollah Khomeini’s choicest imageries were deployed for the demonisation of the Western enemy. For Osama too, history was an inherited lie, and only retaliation would repudiate it: “America is struck by Almighty God in one of its vital organs, so that its greatest buildings are destroyed.” The new jihadi too seeks blood for the sins of America. In the history of revolutions of all varieties, including the Caliphate fantasy of the Islamic State, an enemy is aprerequisite, and Christendom, reduced to America’s size for the comprehension of the idiot-killer, fits the bill. An American journalist is the easiest prey for, well, the Western jihadi in the thrall of a blood carnival in the most exotic location.

This carnival, brought to us by the videotapes we dread to look at, is still not as spectacular as what happened in New York 2001. The reality of the Islamic State has not sunk into the conscience of the free world—or the one who claims to be its leader. Once there was a war for freedom; today we watch in impotent rage the butcher’s video art.