The Hero and the Prince

In the democracy they disdain, there should really be no place for either 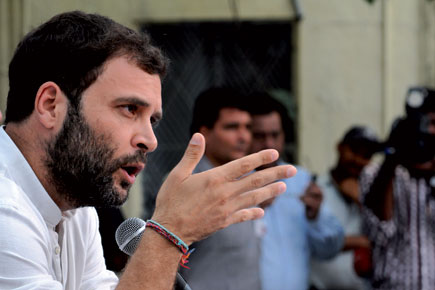 In the democracy they disdain, there should really be no place for either


As this week has once again proved, Manmohan Singh is an easy target. Rahul Gandhi’s attack of the ordinance on convicted politicians drafted by the Manmohan Singh administration was an attempt to reverse the decline of his  popularity among the public and within the Congress party. Even as the Prime Minister’s aides were struggling to cope with the fallout, the BJP’s would-be Prime Minister Narendra Modi stood up in Delhi to criticise Manmohan Singh for stammering before US President Obama about India’s poverty. Modi then took it upon himself to declare that Pakistan’s Prime Minister Nawaz Sharif had gravely offended the Indian Republic by comparing Manmohan Singh to a dehati aurat (‘village woman’).

Crude and opportunistic, Rahul Gandhi’s attempts backfired. But it did establish that for the sake of protecting his image he was not only willing to stand on either side of an issue within the course of days, but also abandon and insult a man whose loyalty towards him has never wavered. At the same time, Modi’s attack established that he was willing to subvert the truth for the sake of personal aggrandisement. Speaking about poverty alleviation is hardly the same thing as stammering about poverty and even Narendra Modi must realise that Washington DC is the fulcrum for any leverage India may wish to exercise with Pakistan.

For both Modi and Gandhi, the position of an Indian Prime Minister representing the country abroad and the possibility of a dialogue between India and Pakistan are minor matters in their quest for furthering their self-image. This is no coincidence. In the cold pursuit of their ambitions, unhampered by any reservations that may stem from personal convictions or the requirements of national policy that go beyond their selves, they are far more similar than they may appear.

It is easy enough to mark out the differences between a self-made man and a dynast, a demagogue and a fumbling public speaker, a man who leads from the front and one who is not willing to assume any direct responsibility, but the similarities go even deeper. Both Modi and Gandhi seek to be above and beyond their political parties. For both, the dynamics of power flows only one way, neither of them is answerable to anyone, open to criticism from anyone. Which is why neither is willing to admit a mistake, major or minor, nor willing to submit to questioning from any observer who is not a participant in their personality cults. Both are men so enamoured of their own image that this is the sole reality that constitutes them. It is impossible to discern any conviction or principle that lies at their core beyond their image of themselves.

Both have been the subject of two biographies each. It is worthwhile going through these books. There is no shortage of discussion on Brand Modi and Brand Rahul, neither is there any lack of examination of the media management and PR machinery of the two. But there is nothing to reveal what either man stands for or what the principles are that each is unwilling to ever compromise on. In their book on Rahul Gandhi, Jatin Gandhi and Veenu Sandhu cite an interview of Pratap Bhanu Mehta on Rediff.com where he states: “I think Rahul is making the biggest mistake in thinking that… somehow you can be a big national leader without taking a clear public stand on the major issues of the country.”

There is a telling moment in Kingshuk Nag’s book The Namo Story: ‘Modi also loves to project himself as a hero, a powerful man, destroying all villains. Any contra-projection angers him. I got a taste of this on the morrow of the Akshardham incident in November 2002. When The Times of India reported how Modi and Advani ventured to enter the complex and pose next to the bodies of the two assailants who had been shot to death, I was greeted by an early morning call from an incensed Modi. ‘Why are you writing that we went in after the intruders were killed? It conveys I am a weak man,’ Modi said.’ It is unsurprising that on the morning after a terrorist incident of this scale, Modi’s real concern was about the impact of the attack on his image.

The image of the hero allows for no obstacles, or deities, as LK Advani has recently found and Keshubhai Patel did much earlier. Modi’s path to the top is littered with fallen idols. Even the very organisation that he owes his entire career to, the RSS, stands decimated and marginalised in Gujarat. Unlike in other states such as Madhya Pradesh that have a BJP administration, the Sangh Parivar has no say in the Modi administration and the anger within the VHP against him is explicit. Many of those accused of the 2002 killings in Gujarat feel they have been left to fend for themselves while Modi has accrued to himself the political gains of their actions.

Neither is such an image open to scrutiny. This is one of the reasons that Modi has not let an independent lokayukta be appointed in Gujarat. His interviews, much like the ones Sonia Gandhi used to give, seem pre-scripted with little or no space for counter questions. Speaking to The Wall Street Journal on malnutrition earlier this year, Modi said girls in Gujarat suffer malnutrition because it is a vegetarian state where beauty-conscious girls refuse to drink milk when their mothers ask them to. Asked about the Gujarat killings in a Reuters interview, his mind conjured a puppy run over by a car. If this were a simple case of a politician concerned about his self-image, the mistakes could have been acknowledged subsequently and rectified. Politicians such as Bill Clinton have shown that a little humility and contrition go a long way in shoring up a political career. But for Modi, this would mean acknowledging a mistake, and leaders of a cult do not make mistakes, which is why he can claim that China spends 20 per cent of its budget on education and let that statement stand even when it is patently untrue.

This is a trait Gandhi shares. It began with his claim that he could have been PM at 25. It continued with his confusion between ashes of the dead and burnt dung heaps in Bhatta Parsaul, where he thought he spotted signs of a massacre of farmers protesting land acquisition. These are statements of his that require an explanation or expression of regret. Again, neither is forthcoming. And exactly as is the case with Modi, this prince cannot be subjected to a sceptical questioner. He has never granted detailed interviews to the media. He has never addressed difficult or uncomfortable questions, or faced such questioners.

Aarthi Ramchandran’s book on Rahul Gandhi has a chapter devoted to political opportunism and inaction that begins with the Bhatta Parsaul incident: ‘It was another case of shoot-and-scoot-politics that has become Rahul Gandhi’s hallmark.’ She then deals with the drama played out over the Lokpal Bill where Rahul made a last-minute entry to the debate and claimed his suggestion of  Constitutional status for the Lokpal as a ‘game-changer’. It was anything but. However, shoot-and-scoot-politics is a perfect description of how Gandhi acted during his recent intervention on the convicted-politician ordinance, with much the same consequences as in previous cases.

It is no surprise that speaking on behalf of the Nationalist Congress Party, a UPA ally, its spokesperson DP Tripathi said, “Mr Rahul Gandhi is free to say whatever he wishes to say about the Congress party, but the Government led by Manmohan Singh is not a Congress government. It is the UPA Government and I am sure Rahul Gandhi knows we are his allies and not his followers.” Tripathi’s reasons for saying so may be a product of cynical self-interest, but they point to something significant. Modi is not the only one who has an ally problem, so does Gandhi, which is why we have never seen him deal with any issue that involves the UPA. Tripathi’s analysis is succinct and to-the-point, for Gandhi is unable to operate in a forum where he is surrounded not by followers but people who will presume to speak as his equals.

Again, unsurprisingly, that is a description that applies in equal measure to Modi. This is simply not a case of allies not liking Modi, it goes beyond. In his book on Modi, Nilanjan Mukhopadhyay notes: ‘I asked him about how he looked at the coalition era and the fact that this phase did not appear to be fading away… Modi was unequivocal in his view that ‘by compulsory voting, this problem will get resolved’.’

If we consider these traits collectively, a failure to deal with equals, a discomfort with the diversity of this country, an inability to face sceptical examination or admit mistakes and a disdain for the party structure, we are left with two men who are actually deeply uncomfortable with the workings of a democracy. What we are in effect being offered are two cults, one older and more established, and the other charged with the fervour of neo-converts. This is evident in the manner in which their cult followers react to dissent.

I have had several occasions to deal with Manushi Editor Madhu Kishwar’s defence of Modi. It can be greatly amusing to hear of Modi as a man who is implementing Mahatma Gandhi’s ideas, but it is alarming when she asserts that most of Modi’s critics are paid stooges of the Congress. And then in the wake of Gandhi’s theatre on the ordinance, I read the political scientist Radha Kumar’s defence of his actions in The Indian Express, which begins by saying, ‘Led by the BJP, naysayers—which unfortunately includes most of the media …’

Only their belief in their respective cults can excuse such delusion. And like all cults, they feel everyone who stands outside their respective cults is an enemy. This is a clear indication of the dangers that lie ahead if either of these men is a central figure in the next administration. Rahul Gandhi may not be projected as the Congress party’s Prime Ministerial candidate, but given his mother’s failing health, he would be the most powerful figure in any administration where the party plays an important role.

To then posit these elections as a choice between ‘communalism’ and ‘corruption’ is not just an oversimplification, it ignores the very real and common dangers posed by either alternative. It is already clear that some of the support that Modi has garnered stems from a dislike of an administration that the Congress has run over the past five years. It is also clear that some of the votes accruing to the Congress and its allies will be a result of a revulsion for Modi.

Supporters of the respective cults will read the numbers differently, but even as we face up to the fact that we have never had an election that is so polarising, we must also acknowledge that we have never had an election where such a large number of voters are wary of either of the choices they are presented with. The effect of these voters may not be palpable, some may be forced to make the best of a bad bargain, some may abstain, but their very existence is a sign that despite Modi and Gandhi, there is still some vitality left in this democracy.