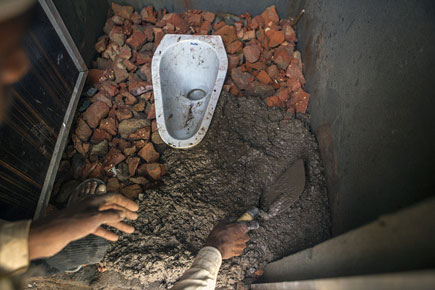 Imagine, if you will, a man going to the office of Delhi or Mumbai’s municipal corporation for a job interview. Since the man is an illiterate slum dweller, think of him as applying for a low-paying post, maybe as a cleaner of drains.

Assume that he does not have to pay a bribe, is suitably eligible, but then, at the penultimate stage of the selection process, is asked whether there is a toilet in his home. If he does not have one, would he be wrong to wonder what that has to do with anything that his work would entail? Or imagine him in a somewhat better context, in the final semester of an IIM diploma, being interviewed by a private equity group during placements. And after a series of smart answers, being asked: “Is there a toilet in your home?”

It is an absurd eligibility criterion anywhere in the world because it is none of anyone’s business whether someone does it in his home, on the fields or beside the railway tracks. That is why when the Bihar government this week reversed a law disallowing people from contesting panchayat polls if they didn’t have a toilet in their home, it was good riddance of a stupid idea.

The law passed last year wanted to encourage the building of toilets at home. There are, of course, easier ways to do it, like just building toilets at people’s homes with government money and labour, but that comes at a price and noble intentions are very good so long as one is not asked to put one’s money where the mouth is. Also why pay when you can force?

It is good to have a toilet in one’s home and who doesn’t want one, but there are sound economic reasons why extremely poor people don’t have it. Also, consider the number of avenues that the poor find themselves barred from. They can’t afford education, so almost all white-collar jobs are out. Premium public spaces like first class compartments, air-conditioned buses, are denied to them. Private healthcare is out. Any work involving any government office is a series of runarounds and middlemen.

What does it say of a political system that gangs up to keep such a man who endures the humiliation of being poor out of politics, in service of an ideal in which he does not fit?

The mandatory toilet is not the only such instance. In Haryana, a person must be educated to stand for panchayat polls and that is a measure that has not been reversed and stands like an ugly precedent which sooner or later other so-called progressive states will want to adopt.

The culmination of this trend is for the homeless and illiterate to be perpetually barred from being part of the government, because they don’t deserve it. They didn’t have the foresight to be born in a family that could afford to send them to school and build a toilet in the backyard. And those who had will govern, because privilege equips them to. There is a grim similarity to the caste system somewhere there.