The Clash of the Khans 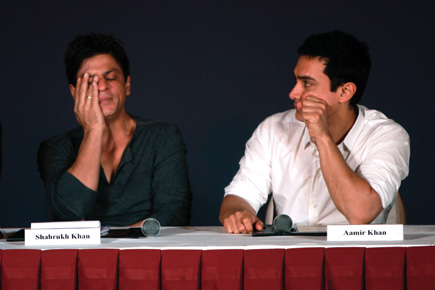 There’s no love lost between Aamir Khan and Shah Rukh Khan. From taking jibes at each other in the media repeatedly, to launching elaborate marketing campaigns for their films with the intention of beating the other’s box-office records, both stars have gone to great lengths to emerge as the more successful and popular Khan. And now one learns that both men are adamant they want to release their respective films for the Christmas weekend next year, even if it means clashing against the other’s film.

In all fairness, Christmas 2011 had been more or less earmarked by Shah Rukh for the release of Don 2, which the actor will continue filming in Berlin until the middle of next year. But it appears now that Aamir Khan has decided he wants his next, the Reema Kagti-directed untitled thriller, to open on Christmas 2011. The actor has allocated bulk shooting dates during the summer of next year, allowing enough time for post-production before a tentative release in December.

Both films, incidentally, are being produced by Farhan Akhtar and Ritesh Sidhwani’s company Excel Entertainment, and Big Pictures has apparently acquired distribution rights for both. Understandably, neither company is willing to allow one film to eat into the business of the other.

If the industry grapevine is to be believed, Big Pictures asked Akhtar and Sidhwani to sort this out between themselves. While the producers are closer to Shah Rukh personally, they are thrilled to be in business with Aamir again for the first time since Dil Chahta Hai, a decade ago.

Big Pictures is believed to be tilting in favour of Aamir, knowing that he’s delivered three back-to-back money-spinners over the Christmas weekend in previous years: Taare Zameen Par, Ghajini, and 3 Idiots. They hardly want to be the guys responsible for jinxing his lucky streak. Hence, it appears they’ve asked Akhtar and Sidhwani to convince Shah Rukh it’ll be best to move Don 2 to a February 2012 release.

Rishi Kapoor may be mad at Karan Johar for encouraging Deepika Padukone and Sonam Kapoor to take digs at his son Ranbir on Koffee With Karan, but who’d have imagined just how angry that incident would make him?

The veteran actor, who was committed to star in a pivotal role in the Agneepath remake that Johar is producing, has said he will no longer do the film “because I can’t work with someone who has no respect for my family”. Until the Koffee fiasco, he was looking forward to appearing in the film as a feared butcher who runs a local drugs and prostitution ring. RK was particularly excited since he’d rarely ever been approached for a negative role, and was more than ready to appear bald.

Only recently, another cast member—Nana Patekar—was replaced with Sanjay Dutt to play the film’s chief baddie. Now Johar may have to find a replacement for Rishi Kapoor too. However, what’s worrying the producer is the jeopardy that a promising Ranbir Kapoor starrer he was set to produce next year (to be helmed by the actor’s good friend and Wake Up Sid director Ayan Mukherjee) may be in.

Only days ago, a prominent model (of European origin) and Bollywood item-girl made tabloid headlines when she was photographed unflatteringly at a public event where, it appears, she was wearing no skivvies under her little black dress. The lady was apparently outraged by the pictures, and has said she inadvertently stepped out without her innerwear.

But a little snooping around tells us there may be more to this incident than meets the eye. The model has been away from India, working on a music album in London for the last few years. Only the day before these pictures appeared in the press, fellow models and actors had welcomed her back to Mumbai through a string of messages on Twitter. Sources say the ‘no underwear’ appearance was a carefully planned strategy on the part of the model, who’d wanted a ‘welcome back’ stir in twitterspace. Now it appears the photo splash has worked, and how! The model has already received a handful of music video offers since those controversial pictures first broke. Who’d have guessed a pair of panties is all it would take (or not) to put her back in business!