...from the Rajya Sabha 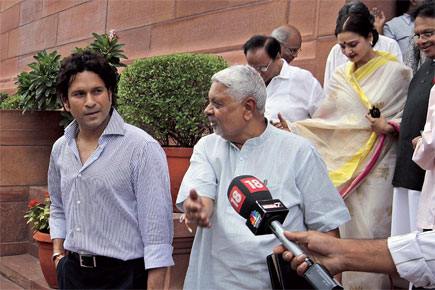 …from the Rajya Sabha


You don’t need to be an elephant to remember how difficult it was to get Sourav Ganguly packed off from the Indian cricket team. It took the irritation, exasperation and collective prayers of an entire nation, barring West Bengal, to finally see him go. He then did a repeat in the IPL, where again he holds the distinction of being forced to leave two teams. When someone with such a history says that had he been in Sachin Tendulkar’s shoes, he would have retired, then all you can do is rub your eyes and sigh at how low Tendulkar’s stock has fallen.

From a fatalist’s point of view, the timing of his retirement is not even an issue. It is like the dictum of the share market— at whatever level it is, that is the proper level for it. Tendulkar will hang up his boots when he can no longer afford not to. A couple of centuries, as has happened in the past, and all the voices, including Ganguly’s, will go back to the familiar refrain—‘He should choose his time’. And then a lean patch, and it will be that other familiar refrain—‘This is perhaps the time’. And in between these two refrains, when the sporadic humiliation outweighs the comfort of playing on, Tendulkar will, like others before him— Steve Waugh, Kapil Dev, Brian Lara—call it a day. This is the end of all sportsmen barring a few Don Bradmans. Tendulkar’s cricketing life has been remarkable, the exit will be pedestrian in comparison.

But there is another career that he must take premature retirement from. If you followed the vote in Parliament over multi-brand FDI, one of the things you would have noticed is Member of Parliament Sachin Tendulkar’s contribution to it. It was, to be precise, nothing. He was absent from the Rajya Sabha because he was playing cricket. In the days running up to the vote, for some time, as the BSP and Samajwadi Party flip-flopped and negotiated, it was thought every vote, even Tendulkar’s, would count. The allowing of multi-brand FDI is an important issue for this country.

There are entire sectors at stake. If it comes to a choice between a game of cricket or the potential elimination of all small shopkeepers in the country or the potential elimination of all middlemen between farmers and shops, then any responsible citizen who is fortunate enough to be a parliamentarian doesn’t have to think too hard. And we even lost the Test. There is a reason that such a choice was not even a distant consideration to Tendulkar—a) there is no value to something that comes without effort; and b) there is no value to something that is not wanted. A Rajya Sabha seat is a big deal. Someone like Arvind Kejriwal could become an authorised nuisance. A fixer or criminal could build networks lasting him a lifetime. Any one of the millions of unemployed or starving could live off the free accommodation and salary. They would all come to put in a vote over FDI.

Imagine Indian society as a pyramid of clubs. At the bottom is the biggest club—of poor people with very feeble connections among one another. Then there are the smaller slabs of the middle and upper middle-class. Then there is the even smaller one of the rich and powerful. At the very top is the smallest club of all—the elite who head other parts of society and helm the country. They are few in number and have strong networks among themselves. Before Thackeray died, you saw members of this club coming to pay obeisance at his home. To get into this club, you must either be born into it (Rahul Gandhi) or spend a lifetime working your way into it (Manmohan Singh) or manipulating your way in (Amar Singh). A select few get invited in because of their extraordinary achievements and popular support. It is no coincidence that Shah Rukh Khan is such good friends with Rahul and Priyanka Gandhi. Tendulkar is also an invitee into it. The Rajya Sabha seat is his co-option and a bonus that comes with free entry.

Except that he has no interest in public life. The only time he did anything remotely political was when he inadvertently said Mumbai belongs to all Indians three years ago, when the MNS and Shiv Sena were raising their pitch on ‘outsiders’. Thackeray wrote against him in Saamna and Tendulkar immediately shut up. You could be kind to him then, saying that he was just a cricketer; politics was not his business. But what do you say now?