Spare Us the Gandhian Halo 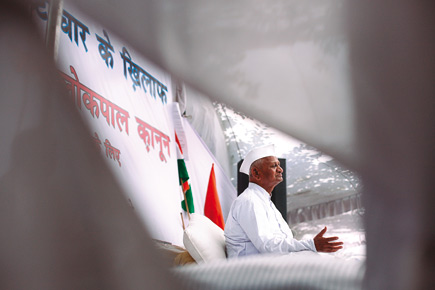 
On a Headlines Today programme, the channel head, an enthusiastic Rahul Kanwal, is talking to Anna Hazare, Kiran Bedi and Arvind Kejriwal (a former IRS officer who is now a prominent civil society activist). As he begins discussing ‘Ab iske aage kya’ (What now after this?), he turns to Anna Hazare, and asks in Hindi, “You say that those who are corrupt should be hanged, is that not against Gandhian principles?” Anna answers, again in Hindi, “That is why I have said that, today, in many things, along with Gandhi we have to look towards Shivaji. [Unclear] Patel committed a mistake, and Shivaji had the man’s hands cut off. This policy of Chhatrapati, in many ways, we have to think about. Hundred per cent non-violence is not possible. Sometimes, even this has to be done, and that is why I have been saying that these people should be hanged…” Kiran Bedi interjects, “Anna is not taking away due process… he is going by the due process, the point is [that] economic offences today in our country are bailable, [are punished] by fines, minimum imprisonment; [there’s] no recovery of property, it is a joke.”

This is a perfect example of how the Anna Hazare movement has been operating for a while. There is little confusion about what Anna Hazare means: when he says “hang them”, he means “hang them”; when he says “cut their hands off”, he means “cut their hands off”. Kiran Bedi did interject to put a palatable spin on these words, but what she said was clearly not what Anna meant. The accompanying profile in this issue clearly shows these words are in keeping with his past. As a result of Anna’s reformist zeal, the people of his native village Ralegan Siddhi have witnessed the public flogging of those who dare to drink, a ban on all intoxicants, and restrictions on cable TV. It does not take much to see how closely this resembles the ideals of the Taliban, especially if you factor in the idea of a few hands being chopped off. Which is why it is no surprise that the sympathy he has long displayed for the Hindu Right has culminated in his endorsement of Narendra Modi.

The real surprise is that supporters of this movement see what they want to see in the man, belying all the evidence that exists. Consider those who have gathered under his banner. Among the people who shared the dais at Jantar Mantar were Medha Patkar of the Narmada Bachao Andolan and Ram Madhav of the Rashtriya Swayamsevak Sangh (RSS). Supporters of the movement range from Arvind Kejriwal to Baba Ramdev. Add to this Swami Agnivesh and Sri Sri Ravi Shankar.

This diversity would have been acceptable if the movement was only about the Lokpal Bill. In this context, the movement would have only served to broaden the consultative aspect of the drafting of a bill. Given that the Government has already created a body called the National Advisory Council (NAC) that drafts policy, monitors government programmes and exercises almost veto powers over significant aspects of governance, the process of naming people from civil society to help draft the Lokpal Bill is hardly of consequence. The NAC is already a body filled with people who have no accountability to the electorate, but it actually exercises power over how the current Government functions.

In fact, such a focus on the Bill misses a larger point. From the very beginning, as another accompanying piece shows, the actual Bill has been a sideshow. For a large number, the Bill has become just a symbol, a precursor to the messianic hopes of cleaning up the system. In Hazare, supporters of the movement spot a figure similar to Jayaprakash Narayan (JP) who could spearhead a movement against corruption that might eject the Congress from power once again. This is an aim that is shared by not just the Hindu Right, but those who have turned out in such visible support of Anna Hazare. This ranges from the TV anchors who see TRP benefits to those of the middle-class who see this as an opportunity to effect change without entering an electoral process that they see as vitiated. In some ways, the hope is again for a movement much like JP’s that placed an assorted group of socialists and Jan Sanghis in power at the end of the Emergency. The movement had no coherence, the Government that it placed in power was a farce, and its downfall did nothing for the battle against corruption.

Fifteen years separate JP’s movement that kicked off in 1974 from VP Singh’s Jan Morcha in 1989 that brought the National Front to power. Unsurprisingly, that was another government that quickly descended into a farce. Perhaps, it is our fate as a nation that every 15 to 20 years, the middle-class will forget the farce played out by a previous generation and repeat it in its own time. Yet, the fact remains that even JP and VP Singh had to turn to the Indian electoral system for vindication, and in the end they failed because the cause they stood for was not well articulated and lacked a coherence that is necessary for a government to run effectively.

Even in their eventual failure, JP’s movement and VP Singh’s fight against corruption attracted a far wider base of people than those who were in attendance at Jantar Mantar for Hazare’s fast. So far, there is too much hype from Bollywood and the social media in this cause, and too little on the ground to back it up. But the revulsion against corruption reflected in this movement does have an echo in the country. As the 2G and a host of other scams have unfolded, it has been easy to get disgusted by how the Government and those accused have reacted. Denial and arrogance have been mixed in equal measure. Even those who played no part in the actual scam, such as the current Telecom Minister Kapil Sibal, have evoked revulsion by the sophistry they’ve brought to the defence of the Prime Minister and UPA Government. For many, this has been reason to take refuge in the very agitation Hazare promises.

But if we look at what the 2G scam shows, it is that the system has a certain resilience that asserts itself. Despite the Government working actively to cover up what happened, the coming together of a Central Vigilance Commissioner (CVC) who ordered the initial probe, investigating agencies that defied opposition in taking action by tapping Niira Radia’s phone (and persisting even when Ratan Tata or Mukesh Ambani were on the line), whistleblowers who made the scam public, men like Prashant Bhushan who took the case to the Judiciary, and sections of the media that risked running stories on the scam, all pulling in the same direction have ensured that such a scam cannot be wished away. It will not blow over. It is actually a sign that the system can work—it has to be helped along where possible, and in such a context, an adequate Lokpal Bill can be one more measure.

In such an environment, the need to buck the system, to insist that a way outside electoral politics is the only way, is disastrous. The authoritarian nature of the Anna movement, which has still to show that it enjoys mass support of any sort, is already obvious. It ranges from small things—such as Anupam Kher, a vociferous supporter of Hazare whose own record on Gujarat as chief of the Censor Board was at the very least questionable (impeding the release of several documentaries related to the riots), absurdly telling my co-panelist, Supreme Court lawyer Meenakshi Lekhi, while discussing this very issue on Times Now, that her body language was not celebratory enough—to much larger issues such as the insistence of this movement that only its own version of the Bill must be passed, and that Parliament should have no say on the Bill once the drafting committee has done its work. This is absurd, but it signals what lies ahead.

It is why we need to focus on the figure of Anna Hazare. The Gandhian stamp is one way to acquire public prestige in this country. The aura of a Gandhian association has long served public figures well. Part of JP’s appeal was his prominent role in the pre-1947 Quit India Movement. Of course, he was a man who well deserved his stature and it is strange having to mention him in the context of Hazare, but then the amnesia of the current generation of protestors is to blame. Vinobha Bhave, a Gandhian only in letter, was again able to attract considerable public support.

Those who argue that Gandhi has no relevance in today’s India need to focus not on the principles he espoused, but the methods he invented. The moral authority of the fast in the Indian context goes back to Gandhi, but this is not true of anyone who fasts. Hazare’s pretence to Gandhian values is a large part of his appeal. But Gandhi’s opposition to communal divides and violence are central to any Gandhian position. Hazare is no Gandhian, and if you forget appearances and concentrate on substance, adding enforced vasectomy to the list of requirements necessary for residence in his native village, Sanjay Gandhi is the only Gandhi who comes to mind in this context. The varied set of people who have come under his banner should have known this, but people have invested little or no time in studying Hazare’s past. So many are so caught up in the illusion of change, that they have been willing to forgo the truth about the man.