Something’s Lurking in the Dark

The doorbell went berserk after midnight at Manmathababu’s apartment, but whenever they looked through the spyhole, they saw nobody... 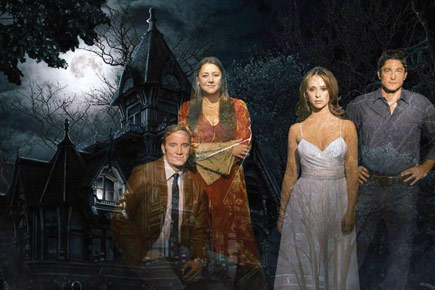 The doorbell went berserk after midnight at Manmathababu’s apartment, but whenever they looked through the spyhole, they saw nobody…


I spent the weekend watching the first season of the American TV serial Ghost Whisperer on DVD. I watched, I jumped at every calculated sudden noise, I wept at every carefully planned emotional manipulation point. I don’t believe in ghosts, but I am scared of them. That’s a paradox, yes, so live with it. The truth is, when I am alone in an apartment, I am always looking over my shoulder and jumping at shadows that pass me behind my back.

So let me tell you about Tarinibabu. But before I get to Tarinibabu, let me speak about Manmathababu. Manmathababu was the best friend of my father, and the best human being I have ever known. But nothing ever seemed to go right for him. At the age of eight, his son, who was climbing up the window, fell, and hit his head on the floor, and became, literally, an infant. He had to be taught everything again, from objects to speech to alphabets to everything we think of as functional. One morning, Manmathababu was standing, innocently, waiting for a bus to carry him to work, when a reputed sports journalist, drunk blind at nine in the morning, mowed him down. One full year in hospital. The conversations among my father’s friends were all about why nothing good ever happens to Manmathababu.

Then he met Tairinibabu. He worked in some West Bengal government department, a completely nondescript person, if you did not notice his extraordinary bloodshot eyes. He claimed to be a tantrik. He visited Manmathababu’s home and felt there was something wrong with it. Bad vibes. A few days later, he came back with specific instructions. If anyone rings the bell after midnight, do not open the door without looking through the spyhole. If you see no one, do not unlock the door. If you see someone, even if it’s someone you know well, ask: “Who are you?” Open the door only if you get a verbal answer. Spirits cannot speak.

Over the next two weeks or so, the doorbell went berserk after midnight at Manmathababu’s apartment, but when they looked through the spyhole, they never saw anyone. In the meantime, Tarinibabu lost weight and started looking frail. Finally, one day he said, and I was present there: “There is a very powerful female force, Manmathababu, which aims to hurt you, extremely. Is there a woman you have jilted or hurt?” Manmathababu was speechless. He had never known—forget known, never looked at—any woman other than his wife. “I have never met such a powerful force,” said Tarinibabu. “It’s a woman and she wants you to come to grief with all her heart. She hates you more than a normal human being can ever hate. But I am fighting her every night, and I shall win.”

What happened after this, I have no explanation for. Over the next two months, Manmathababu’s sister-in-law, in Guwahati, went totally insane, running out of home and sleeping in drains. Tarinibabu’s explanation was that when she came to Manmathababu’s house as a bride, she fell deeply in love with him, but he neither realised it nor grasped any hints. She hated him all her life for this perceived rejection. She had powers she may have been unaware of, but her hate haunted him all his life. She could call up forces, wittingly or otherwise, that made sure he was in trouble. I met Tarinibabu after she had been committed to a lunatic asylum. He had lost half his weight.

Another episode involving Tarinibabu. My cousin was staying with us then, and Tarinibabu was visiting. My parents asked him to read my palm. He looked at it, went into some sort of trance, and said there was nothing he had to say. My cousin’s palm was proferred next. He still seemed to be in some sort of state. He looked at his palm cursorily, and said he was heading into bad times, that if he didn’t watch out, he could be going to prison, and he would never graduate. We were all shocked, then shrugged it off. Two years later, we discovered that he was talking about what was going to happen to my life. He seemed to have seen it, but pushed it to the wrong guy.

Is there something out there?