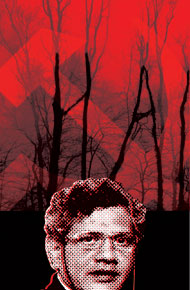 In the coastal town of Visakhapatnam, it was the assembly of the haunted, and the spectral atmospherics were apt for the occasion. They were among the last remaining characters in the biggest ghost story of the twentieth century. (The others could be found in places such as Pyongyang and Havana.) They were there to reclaim the lost Soviets—ah, it all happened due to a scientific error. Empires would come and go, but the purest of revolutionaries would live life as prescribed by the Book. And they, unlike their counterparts elsewhere, were the luckier lot. They had no empire to lose; they had actually nothing at stake except a few districts in the south and east of India, an idea waiting to be salvaged from communalists, capitalists and casteists. They had nothing to lose except all those borrowed slogans. They alone defied exorcism by history. Visakhapatnam could have been a Transylvanian parody of the Undead.

Still, the funny thing was, at the end of the event in which men without shadows floated in the thinnest air of ideology, someone mentioned “the future”.

When Sitaram Yechury, the new General Secretary of the Communist Party of India (Marxist) said it, it sounded out of place, out of history. In other words, truly revolutionary. It was the congress of the future, he said, and he meant it, for Marxism and irony never go together.

By saying so, he was only living up to the hoary tradition of communism. It was all about ‘the future’ from the very beginning; communism let man dream. In its ambition, it was more beguiling than the religion that promised paradise—and you were on the road to heaven (on earth) without the extra burden of the cross. It was a beautiful dream, and the biggest one ever dreamt by humanity. The idyll of the alternative was irresistible to some of the finest minds of the last century. It was great to be haunted by the spectre of liberation. Once in power, the metaphorical ghost became a reality: the strengthening of the empire required the perpetuation of the Big Lie; the decimation of questions was a prerequisite for the creation of socialism’s New Man. For the revolutionaries in power, the great terrors of ideology were a historical necessity in the larger struggle against capitalism— and the counter-revolutionary bad eggs at home. Indian communists, even as they missed India, internalised the Stalinist horror chambers, and stayed faithful to the Book. Even when the Book was abandoned by history, and the Big Lie was unravelled, Indian communists refused to seek an exit from the make-believe.

I remember meeting EMS Namboodiripad, retired to his modest flat in a suburb of Trivandrum, one sultry afternoon a few months before he left to meet Marx in 1998. The great man, still blissfully steeped in the Vedic scripts of revolution, was hopeful of communism’s comeback after the ‘practical’ error in the Soviet Union. For our highest priest of communism, the ideology was history-proof, and the sight of him waiting for another day was tragic. A Sitaram Yechury talking about the future without the courage to repudiate the past is a farcical sight. This may be a world without the Soviet Union or the Berlin Wall, but it is not the one that the Indian communist inhabits—or one that Comrade Yechury, or his predecessor Prakash Karat, has come to terms with. In a post-communist world, comrades here wanted to control India through dialectical harlotry, the last instance of which was when Karat sought to rule India by exercising his arbitrary power as the mind-controller of Dr Manmohan Singh. The dutiful doctor became a politician the day he called the comrade’s bluff and stood by his ‘imperialist’ credentials.

What Karat did was very Marxian in the Indian context. The communist lost every war in India—of class, caste and culture. The initial victories in Kerala and Bengal had behind them a long tradition of grassroots struggle against power. The romance of the first generation communists was built on social realism, but they failed to take provincial exceptionalism to the wider canvas of the rest of India. The applied science of communism did not work in the heartland of India. Communists lost the argument—and the country. And there was no effort to change, to keep pace with a world that was fast shedding the dead certainties of ideology. There was no urgency for a rebirth even after the new generation took over the party. Karat could have been the catalyst, but he refused to deviate from the Book. For a generation that learnt its first lessons of the revolution through the class struggle of JNU, the socialist empire, infallible, was a state of the fossilised mind, which was also the last refuge of the orphaned spectre of Europe. The disintegration of the apparat was directly proportional to the growth rate of the apparatchik’s hallucinations. Yechury was very much a part of the process.

His admirers are now calling him a pragmatist, which in the black market of Delhi’s realpolitik is not a noble noun. After all, Harkishan Singh Surjeet was the last pragmatist at the party’s helm. Yechury cannot claim even a fraction of the future unless he takes the first definitive step towards turning the moribund CPM into a social democratic party—and stops mouthing such redundant jargon as ‘neo-liberal tendencies’ and ‘imperialism’. The other option is to discard the ideological junk for the sake of political hygiene.