×
LETTER FROM THE GHATS 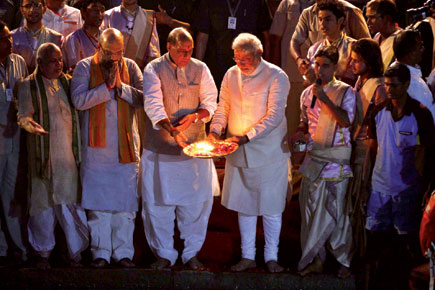 I am back in Benares after a period of seven months. From my very first moment of being back, of stepping out of the railway station, driving through the city and settling down at home, the basic difficulties of life in this city strike me. During this first day back, there are power failures for about eight hours. For unknown reasons but perhaps, as people tell me, because of the recent rain, the broadband connection has stopped working. After spending the day trying to catch up with important work online, I decide to go out for a walk. The last spell of rain was just a short shower, but the road outside my house is flooded.

Last time I was here, the road had been newly fixed. But now it has broken down into a crumbling, pot-holed mess. As pedestrians and vehicles inch their way down a strip of tarmac that protrudes from the lake, a loud, impatient traffic jam forms. Still others simply wade through the water with utterly matter-of-fact faces. The pile of garbage that usually sits on one side of the road has disintegrated and unidentifiable bits of trash are floating on the water. A manhole sits uncovered along the other side of the road, sewage gushing out. Somewhat faintheartedly, I abandon my idea of a walk and call out to a rickshaw. At Assi Ghat, the sight of swamps of rotting garbage and sewage sinks into me even while the sight of the Ganga in the early evening, magnificently broad now because of the monsoons, fills me with some of my old Benaresi pride.

I have recently read about Modi’s trip to Japan. As I wander through the lanes near Assi Ghat, my mind goes over the news of his intentions, of developing Benares along the lines of Kyoto, as a ‘heritage city’ and a ‘smart city.’ Wonderful, I think. But doesn’t anything ‘heritage’ mean dead and gone, and now preserved? Over a million of us live and work here in Benares. We are not heritage.

For all of my life, Benares has felt like a bubble, disconnected from the rest of the world, governed by its own forces. The people of the city are completely accustomed to life that has an inefficient and unfinished quality. They are complacent about it. At the very most, if provoked, they respond to it with the same philosophical attitude with which they approach every aspect of life, one of seemingly infinite patience and good- humouredness.

But Benares is also a bubble of great beauty.

The ghats are breathtaking, and are loved and used by all for peace of mind and play. Within its lanes, there are smaller but equally magnificent versions of the palaces and mansions that line the river, as well as communal squares, wells, shrines and tombs. All of these spaces are still used by the people. Also within the lanes are the workshops of artisans who have produced stunning Benaresi silk and brocade for generations, as well as the homes and baithakis of artists who developed and continue the Benaresi gharana of music and dance. Old-style music and dance ‘sittings’ still take place in temples and homes, known only to insiders.

Benares’ spaces work reciprocally with the city’s remarkable and unique culture, one that values diversity, tolerance and playfulness. The ethos that accompanies this culture and allows for its continuation, despite the physical breakdown of some of the city’s most beautiful buildings and spaces, is called Banarasipan. Anyone can be a Benaresi, regardless of caste, class or religion, as long as they love their city and understand how to live life wisely and imaginatively.

This kind of secular and dynamic communal spirit, and the material framework that supports it and allows it expression, is a strong example for the administrators, designers and engineers of modern India. In understanding the heritage of Benares, one must understand all its aspects, not just the material, but also the philosophical and cultural, and how they work together.

Modi’s visit to Kyoto and the MoU that he signed on 29 August to establish Kyoto and Benares as sister cities is important in many ways. It breaks the bubble that Benares has occupied for decades, connecting it to the rest of the nation and the world—a step towards the connectivity that in fact characterised the city in the past and shaped it. And so Modi’s step also breaks the bubble of Benares in another way, by connecting the city with its own past as well as the future. Benares has been rendered transparent, its blemishes and beauty open to scrutiny as should be. The Government’s gaze has long disregarded Benares. Modi’s pointed attention, whatever the motivating ideology behind it, is a welcome change.

As a ‘heritage city,’ Benares’ ghats, lanes and old buildings need to be preserved. Illegal constructions and demolitions need to be stopped. A sewage treatment system needs to be finally put in place (after much stalling by the central and municipal governments) in order to stop the pollution of the Ganga. The roads have to be fixed and an effective garbage disposal system introduced.

But there is so much more than that. If we imagine Benares as a ‘heritage city,’ there are wonderful examples to which we can look. Modi has looked towards Kyoto, but there are also cities like Leiden and Heidelberg in the Netherlands, both very old places of commerce as well as culture that have been deliberately, actively preserved, and in imaginative ways. There is London itself, where it is not just possible but a joy to walk anywhere at all, or to ride a bike or take public transport.

Like them, we should have, first, simply a clean and functional city—a city with no garbage, open sewers, rotting refuse, days and nights without electricity, polluted water and the resignation of provincial backwardness. Then we could and should also have parks and gardens, libraries, community centres, and neighbourhood events. Benares had all of these civic amenities in the past and all of this forms the city’s unique heritage.

Most of all, if the people of Benares are to continue to live and practice their culture and to strengthen it, they will have to participate in the processes of change, along with learning to follow top-down structural changes. To orchestrate such participatory processes, any government would have to demonstrate not just efficiency but also imagination and sensitivity, the ability to recognise that culture and community are multiple and complex. It is not an impossible task, but revolutionary for modern India… and most likely too much to hope for from Narendra Modi.

Modi’s name passes through the city like a waft of a new and unnamed wind. The people of Benares are optimistic, expectant, impatient, dismissive, resigned and skeptical all at once. Just like the idea of bullet trains seems at one level premature and over-ambitious, so does transforming Benares into a Kyoto or Leiden seem, although highly desirable, purely theoretical.

On my rickshaw ride to Assi Ghat and then my wander through the lanes near Assi, and in the days that have followed that first, somewhat jolting day back, my observations and chats with my fellow Benaresis has spelled out that what Benaresis, of all kinds, want first of all is simply a functioning city and lives of satisfactory comfort. We want first of all to have fixed the spaces in which we live, the water that we use and the air that we breathe, rather than promises about a future that is undoubtedly wonderful, but imaginary. If Modi can give us just all of that, he will have earned this city’s votes. Only then can we together dream and work further.