By portraying a rape survivor as superhero, a unique multimedia project attempts to fight social stigma and bring change 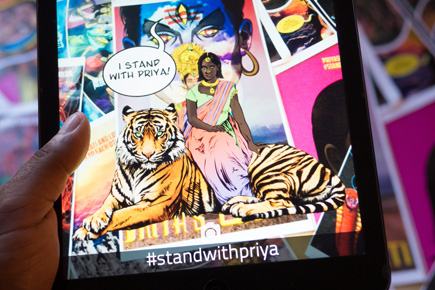 By portraying a rape survivor as superhero, a unique multimedia project attempts to fight social stigma and bring change

Once upon a time, somewhere deep inside a village in India, a graceful little girl called Priya nurtured a dream to become a teacher. But her aspirations are never allowed to bloom into reality, what with her father plucking her out of school to consign her to the drudgery of everyday domesticity. Shackled and helpless, a fully-grown Priya resigns herself to a life full of hard labour and harassment. And one day, she is raped by a man she has known since school. Overnight she becomes a social outcast. Later, goddess Parvati chooses the abandoned Priya to infuse her with an all-encompassing energy. Priya is then re-born to ‘speak without shame’ and spread the message of ‘change’.

Leaving aside the apparent naivety of the tale recounted above, there is a moment in the comic book, Priya’s Shakti that makes you pause. The protagonist Priya is accused after her rape during a Panchayat meeting, ‘Why were you out by yourself?’, ‘You must have provoked them’. And it is here that the comic book, inspired by vignettes from Hindu mythology, chillingly and truly resonates. In the heat of the ongoing Uber rape controversy in India—where a 27-year-old woman executive returning from Gurgaon was sexually assaulted by her cab driver on the night of 5 December—these very lines have sadly gathered a renewed salience. It is what makes this project aimed at sensitising people about gender-based violence an important initiative. By making a rape survivor the super hero of a comic book, the makers of Priya’s Shakti are likely to strike all the right chords and capture the zeitgeist, keeping in mind, that even in the Uber rape case the young victim had the courage and the presence of mind to report the offender immediately after the assault—in a sense making her the real hero.

But there is another aspect to the comic book that makes Priya’s Shakti a unique venture in its own right. It is a smart new intersection between technology and storytelling. There are a number of panels in the comic book which can come alive on a smartphone via an app called Blippar, letting a user experience the concept of augmented reality. Essentially, when you project this freely downloadable app onto the pages of the comic book, ‘certain panels will be animated to feature real-life stories and voices of Indian women who have survived sexual assault’ as pop-ups on your smartphone. Several pages in the comic book can be scanned via the app and they would then throw up hand-drawn comics from teenagers of Dharavi—sketches which narrate personal stories of sexual violence. There are also many first person accounts of women drawn from Priya’s Shakti's NGO partner Apne Aap, an organisation that works in the domain of ending sexual trafficking. And the last page has the voices of four women who are real-life gang rape survivors. In the guise of animation, they retell their stories in their own voices.

Priya’s Shakti has been produced, directed and co-written by New York-based documentary filmmaker Ram Devineni. “I was trying to figure out how to show the struggles of real survivors of rape in the comic book, and augmented reality allowed them to tell their stories in their own voices.” It was in December 2012 that Devineni had determined to start a project driven towards changing people’s mindset towards victims of sexual assault. He was shocked and completely horrified by the response of a police officer blaming the victim for the brutal gang rape and murder of a 23-year-old para-medical student in Delhi—an episode which sent shockwaves around the world. The interactive storytelling technique enabled by the concept of augmented reality, hitherto used primarily in marketing and advertising, has helped Devineni take this story of entrenched ‘patriarchy, misogyny and indifference’ beyond the confines of the comic book itself. As an extension of this project's outreach activities, Blippar will also allow users to take a picture of themselves with the protagonist Priya and post it on all social media platforms.

Dan Goldman, the artist behind Priya’s Shakti, has a wide cache of experience. His visual style is a combination of digital illustration and collage. For Priya’s Shakti, he has designed “an explosive and a colourful hyper-reality” to couch the story in. “As such, I didn't really reinvent or redesign the look of Lord Shiva or Parvati as much as render their classic designs in my own visual style. I've heard from others that I've ‘streamlined’ Shiva but to me they still feel quite classic, just a bit more ‘HD’,” says Goldman who devoured stacks of the classic Amar Chitra Katha which served him as an excellent primer on Hindu mythology.

In what is expected to be a stunningly enhanced visual experience, the City Lore gallery in Manhattan, New York, will hold the Priya’s Shakti exhibition from April 2015. Devineni plans to mount the entire comic book in the gallery like the Sistine Chapel in Rome. “Audiences can scan any of the artwork and experience the augmented reality—see animation pop out off the gallery’s walls,” he claims. The comic book will be available for free in India. Anyone can download a digital copy and can also read it online, in formats like the Amazon-owned Comixology, a popular platform for reading comic books. Having found big ticket supporters, some of which include the Tribeca Film Institute’s New Media Fund and the Ford Foundation, Priya’s Shakti has already garnered widespread media attention, including a feature in the BBC.

Priya’s Shakti will be officially launched at the Mumbai Comic Con, which will be held from 19 December to 21 December, where Devineni will be distributing free copies of the comic book. The irony of many related events coinciding in the month of December is not lost. Devineni’s sole mission, he says, is to “challenge patriarchal views and create empathy and support for rape survivors”.

In the comic book, divine intervention is what finally brings a change in the existing mindset towards rape victims. It may be what we need.