Pinarayi Vijayan: The Politician Who Does Not Smile

In the run-up to the Assembly elections, will Pinarayi Vijayan’s ‘tough guy’ image be tough enough to outshine VS Achuthanandan’s charm 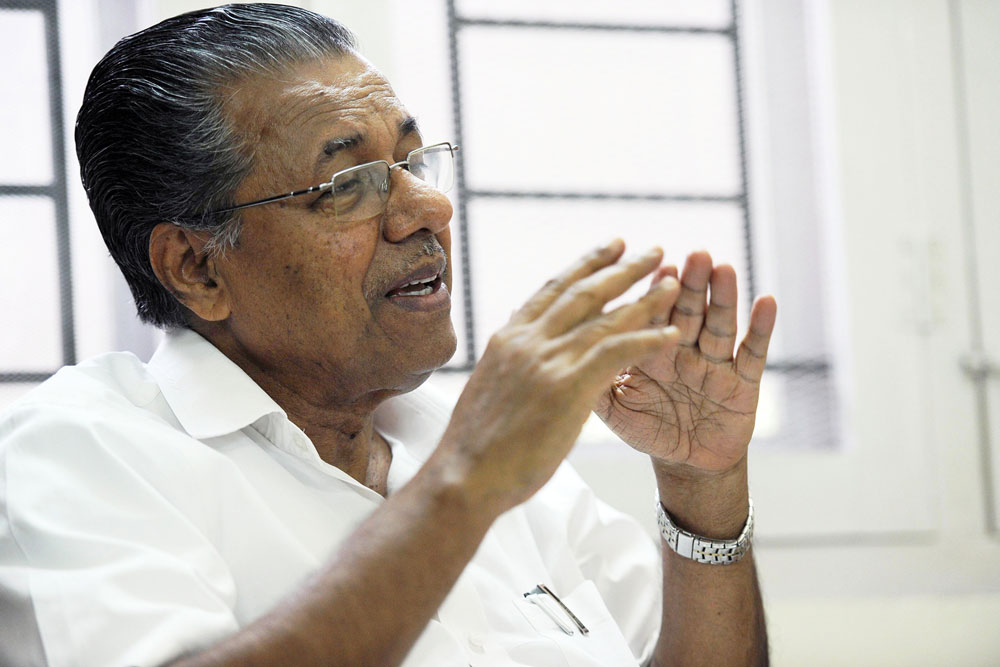 Even as the ruling United Democratic Front (UDF) in Kerala is neck-deep in allegations of corruption and nepotism, it is a general feeling that the Assembly election is not going to be an easy run for the Left Democratic Front (LDF) led by the Communist Party of India – Marxist (CPIM). As far as the CPM is concerned, however, it is clear that Pinarayi Vijayan, who is at the helm of the election campaign along with party stalwart VS Achuthanandan, will not change his style.

Vijayan continues being the ‘tough guy’ who makes no concerted effort to charm his voters by smiling for the press, hugging voters and children or posing for selfies during his campaign trails.

The beginning of the election campaign, during the Nava Kerala March which was a state-level campaign organised by the CPM in January this year ahead of the Assembly polls did see a different Vijayan who cracked a few jokes at press conferences. The short-lived romance was nipped in the bud during an interaction at the Thiruvananthapuram Press Club in April. Journalists questioned him about the party’s stand on fielding him and Achuthanandan together for the polls despite a party resolution against Achuthanandan accusing him of bearing an anti-party mindset. The controversial resolution was engineered and announced to the press last year by Kodiyeri Balakrishnan, the party state secretary. While he claimed that the resolution continued to prevail until announced otherwise, he also accused the media of harbouring intentions meant to harm the interests of the party and later on Facebook, accused the media of misinterpreting his words, an act which many believe is uncharacteristic of this famously stubborn leader. After the controversy, Vijayan stopped having press conferences, even cancelling those that had already been announced. He was back to being hostile with the media.

“There is a section of the media that apparently works for the Congress. They have a right- wing agenda. They consistently take a stand against the CPM,” he told me when I met him at the government guest house in Ernakulam, while he was on a break from his road trip in the district. He repeated that a section of the media was trying to destroy his party. Even as many party members believe that in a time of televised politics, an attitude like his could be a huge handicap, no one, including top party leaders close to Vijayan, has the liberty to tell him that his style of functioning is strategically wrong.

Since Vijayan and Achuthanandan are contesting the Assembly elections together after nearly two decades, the question of who would occupy the Chief Minister’s chair—if the LDF wins—is now open to speculation. Even though the party claims that the campaign is being fought under the leadership of both of them—Vijayan is campaigning in South Kerala and the latter in the north—both leaders have a different way of campaigning.

While Achuthanandan is considered a ‘crowd puller’ and knows how to connect with the masses, one wouldn’t find any titillating metaphors or lyrical speeches from Vijayan. Instead, there is a repeated warning from Vijayan in every public gathering that, he addresses, reminding party cadres to not take the current political climate for granted. “Don’t be overconfident and lazy. Be diligent and don’t underestimate your enemy,” is the message that he sends across on every occasion.

Pinarayi also quite evidently has no aspiration of being a darling of the crowds. What they get is a tenacious expression and a dictatorial tone. Perhaps, this is why during campaign trails, he is welcomed by disciplined cadres instead of large crowds.

Following the debacle with the press on the Achuthanandan comment, Vijayan now is extremely careful of what he says in his public meetings. He addresses only four two five public meetings in a few constituencies in every district and sticks to addressing issues of corruption and development.

Achuthanandan, on the other hand, hits headlines every day with searing attacks on the UDF and chief minister Oommen Chandy. Chandy also filed a defamation suit against Achuthanandan for making an allegation this April that there are 31 cases prevailing against him but the Additional District Judge of Thiruvananthapuram refused to entertain his plea for an injunction to restrain Achuthanandan from making such allegations and said the court is a not a playground for politics. In his campaign trail, Vijayan refrains from mentioning this battle of allegations and chooses to only speak about building ‘sillicon valleys’ in Kerela and reviving the various IT projects in the state. The only exception to not making personal attacks came at Poonjar constituency of Kottayam district, where PC George, a former Kerala Congress leader and former chief whip of the UDF government, is contesting as an independent. Vijayan went all out in attacking George who is said to be close to Achuthanandan and is even believed to have been fielded by the LDF. Interestingly, Achuthanandan chose to stay silent on George during his road trip in Poonjar two days later.

Despite the resolution against Achuthanandan and the stand-off over it with the press, Vijayan was more than conciliatory during his campaign trail in Achuthanandan’s own constituency in Malampuzha in Palakkad district recently. He spoke of Achuthanandan as a leader with wide acceptability among the masses which has benefited the party. Mindful of his relationship with Achuthanandan, as perceived by the press, and in a bid to avoid further speculation and accusations, Vijayan called for a landslide victory for Achuthanandan during his public meetings. He even met local party workers to drive home the message further.

In the last phase of the campaign, Vijayan is training his guns on the BJP, accusing the party of a tacit understanding with the UDF for some seats. This has now become the focal point of the LDF campaign. The UDF views it as a tactical move to woo minority votes and so does the NDA. In his own constituency Dharmadam, Vijayan is expected to walk away with a landslide majority. CPM activists in Kunnur are charged up about his return to electoral politics. The party treats Dharmadam, a suburb off Kunnur town, as its pocket borough as the activities of the Communist movement in Kerala in 1939 began from there. Party workers are all praise for Vijayan. “He says only what can be done and does what he says,” says N Balakrishnan, a party worker in Dharmadam.

The million dollar question however remains. If the LDF party manages to win this election, would Vijayan be able to become chief minister despite Achuthanandan’s popularity? Or will he have to give way once again? While the party line seems uncertain at the moment, what is certain is that this is just a lull before the storm between the two stalwarts.