Parliament Is Not a Cricket Game

A JPC must meet the test of public interest, not of gains for the BJP or Congress 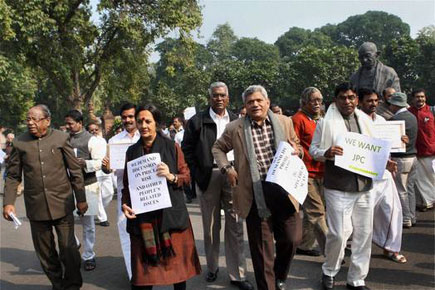 A JPC must meet the test of public interest, not of gains for the BJP or Congress


The headlines scream day after day, ‘Cong on backfoot as BJP stands firm on JPC’, ‘PM’s googly splits BJP’. Each day, newspapers and TV channels debate the current impasse in terms of gains for the Congress or BJP. On the front page, if you replace Congress and BJP with South Africa and India, it would be difficult to tell whether we are talking politics or cricket. In this coverage it is easy to forget that Parliament, in the end, represents the people of India and the debate is not simply about which team is gaining or losing, but about what in this cacophony is actually in the public interest.

The Radia tapes have emerged from the 2G scam, but what they reveal about our country far transcends the scam. Cabinet formation, the country’s policy on natural resources, and attempts to manipulate the judicial process are only grist for networks of lobbyists, power brokers, politicians and journalists which seem to subvert due process in our democracy.

We have seen some of the individuals concerned apologise, but only after the revelations made their role obvious. In one case, a media institution has taken appropriate action, but almost everyone else has continued with business as usual. Institutions and people who make credibility their watchword seem to have forgotten the meaning of the word. In the face of such brazen denial of what has emerged, it seems to be the case that we as a nation are being strung along by those involved, as they live in the hope that this, like everything else, will be erased from public memory with time and the next scandal that comes our way.

Even the way the only positive fallout so far of the debate, the framing of a new privacy law, was stage-managed by the very editors , columnists and industrialists who make up the world of the Radia tapes, suggests we have not escaped the power of the very few to lobby for what is in their interest. There is a hypocrisy involved in their breastbeating—any new law that is framed will not preclude individuals such as Radia from being tapped, given what is emerging. There is no need to prejudge the investigation, but to suggest the transfer of funds that seems to have taken place counts only as lobbying is absurd.

A cosy little world that believes its own interest is the national interest has been outed by the tapes. In the face of this problem, a CBI investigation that has a very specific and limited mandate is not an answer. Neither is the Public Accounts Committee of Parliament, which by its very mandate ‘is not concerned with questions and policy in the broadest sense’. As a rule, it expresses no opinion on points of general policy. Only a Joint Parliamentary Committee (JPC) that ‘can obtain evidence of experts, public bodies, associations, individuals or interested parties suo motu or on requests made by them’, can do justice to issues arising out of the 2G scam and Radia tapes.

The arguments made against a JPC don’t stand to reason. For the Congress, a political party, to argue that the JPC will be politicised is strange. The JPC is an institution of Parliament designed to meet an extraordinary situation, and this is indeed one. Commentators have argued that the Congress fears the JPC will drag on till the next election, bringing matters to light that will continue to shame the Government. If indeed there is much that can come to light, that again is a reason for a JPC. Finally, the argument is made that JPCs in the past have failed to provide any worthwhile results. This is not true—the JPC recommendations in the Harshad Mehta Securities scam continue to remain relevant today—but even if one were to concede the point, by the same token we should disband the CBI altogether.

However much I or anyone else may detest the ideology of the Sangh Parivar, the fact remains that a JPC is urgently required, who it helps and who it hinders is secondary to the importance of what is before us. In this context, it is saddening to see a PM who has been repeatedly touted as an example of public probity resort to a sleight of hand in agreeing to appear before the PAC. A prime minister must at all times place the national interest before his or her party’s interest, there is still time for Manmohan Singh to do so.