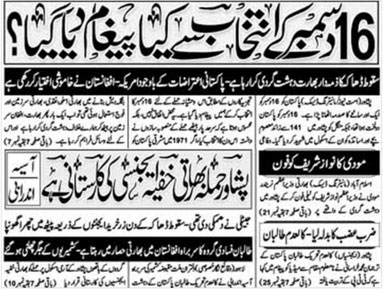 Reading the English-language Pakistani newspapers and numerous posts on social media such as Twitter and Facebook, it appears there has been an upsurge of mass sentiment against jihadists in Pakistan after the Peshawar school massacre in which 132 children and ten adults were killed by Tehreek-e-Taliban Pakistan. However, a review of the Urdu-language newspapers published on the very first two days after the 16 December attack presents a contrary picture with much of the blame heaped on India and its external intelligence, Research and Analysis Wing (RAW).

On December 17, the first day after the attack, Roznama Ummat carried a headline in bold on its frontpage: "What message was sent by choosing December 16?" A sub-headline in bold declared: "India, the perpetrator of the Fall of Dhaka, is carrying out terrorism. Despite Pakistani objections, America, Afghanistan have adopted silence." On the same day, it also published an interview of Kashmiri secessionist Asiya Andrabi on its frontpage under a three-storey headline: "The Peshawar attack is the work of Indian secret agency…" A second sub-headline read: "[Arun] Jaitley had threatened. A sword was stabbed in the back by the bonded agents [Pakistani Taliban] on the day of Fall of Dhaka." A third sub-head declared: "The head of the Taliban anarchist group [Fazlullah] lives under Indian cordon in Afghanistan. Kashmiris' hearts have been pierced."

On Roznama Ummat's frontpage of December 17, a headline quoted Pervez Khattak, the chief minister of Khyber Pakhtunkhwa province: "A foreign force is involved in the tragedy…" On its page three, it carried a story under the headline: "India's involvement in the attack cannot be ignored." A subhead declared: "Many militant commanders present in Afghanistan have relations with RAW…" On 17 December itself, its frontpage also carried a headline as per which the Afghan Taliban, who are known to be supported by the Pakistani intelligence and had earlier bombed a school on December 11 in Kabul, now declared the Peshawar attack as "Un-Islamic." The Afghan Taliban statement was also flashed on the frontpage of Roznama Islam on the day after the attack.

There was certainly unprecedented unity among the Pakistani people on the school massacre, but Roznama Dunya, another leading daily, compared this mass sentiment with anti-India unity during the 1965 war. Its frontpage of 17 December carried a headline: "A sentiment like the 1965 war has been awakened in the nation." It also carried a report as per which leaders of religious and lawyers' organisations blamed India. A headline in bold declared: "Like the Fall of Dhaka, India is involved in the Peshawar tragedy – religious and lawyers' leaders." A third sub-headline mentioned these words: "Now it is the time for India to break up." These statements were summarily attributed to Hafiz Muhammad Saeed, the founder of Lashkar-e-Taiba, Jamiat Ulema-e-Pakistan leader Pir Ejaz Hashmi, Allama Ibtisam Elahi Zaheer of Jamiat Ahle Hadees, among several others.

Roznama Islam of 17 December also carried on its backpage a story based on an interview of Hafiz Muhammad Saeed, who now functions as emir of Jamaatud Dawa and is accused of planning the 26/11 terror attacks. A three-storey headline read: "Terrorists should fear Allah…. The blood of innocents was spilled on the day of Fall of Dhaka under a thought-out plan. Taking advantage of differences, enemies are playing the Holi of fire and blood in the country…" The story quoted Hafiz Saeed as saying: "We do not consider military [i.e. militant] operations inside the country as correct. America and India have boiled the bazaar of terrorism in the region. On their behest, the terrorists are implementing the agenda against the country."

On 17 December, Roznama Jang also published the statement of Hafiz Saeed in a bold headline, stating: "Like in the Fall of Dhaka, India is involved in the Peshawar tragedy…" The Jamaatud Dawa chief was quoted as saying: "The killers of innocent children in Peshawar do not have any connection to jihad…" Almost all newspapers published Hafiz Saeed's invective against India. The editors of Roznama Jang, which is a mass-circulation newspaper, also chose to publish on the daily's frontpage of 17 December a statement of terror mastermind Maulana Razlur Rahman Khalil, who founded the anti-India terror organization Harkatul Mujahideen and now heads the military-protected, Al-Qaeda-linked militant group Ansarul Ummah. Khalil condemned the attack, saying: "The Fall of Pakistan [i.e. Dhaka] has been repeated. Those calling themselves mujahid after killing innocent children should be ashamed. This is pure terrorism."

On its frontpage, the Roznama Ummat of 18 December carried a statement of retired Lt.-Gen. Hamid Gul, the former chief of Inter-Services intelligence (ISI) on whose watch Al-Qaeda was established in Peshawar in 1988, headlined: "India can have more incidents like the Peshawar attack carried out – Hamid Gul." A sub-head read: "The Pakistani Taliban group was used, failure of our intelligence too." The report's first sentence quoted Gul as saying: "India wants to cause wounds to Pakistan in every way and weaken it so that it can fulfil its dream of a united India. Peshawar-like incidents can happen in other cities too." Gul's statement was also carried by several newspapers, including Roznama Dunya.

On the same day, another report in Roznama Ummat declared in bold headline: "Peshawar tragedy – RAW also used the Islamic Movement of Uzbekistan." The report, which was written by the daily's reporter Saifullah Khalid who is known for producing conspiracy theories on behalf of the military establishment, declared: "The investigators of the attack have told the Ummat that four groups are involved in this incident of terror. On the top of the list is India's RAW which planned this incident, trained and gave the target…"

On 18 December, the frontpage of leading newspaper Roznama Express carried a statement of Pakistan Tahreek-i-Insaf leader Imran Khan in which he declared: "Foreign elements are involved in the Peshawar tragedy, necessary for the nation to unite…" On the same day, it carried a report that was headlined: "Al-Qaeda suspected to be involved in the Peshawar school attack." A sub-headline read: "India and Al-Qaeda were unhappy over the Nobel Prize to Malala; the attack could be a reaction, experts." The entire report was attributed to counter-terrorism experts and former defence officers but none of them was identified by name.