Orphans of the Great Republic

The rise of the New Rebel 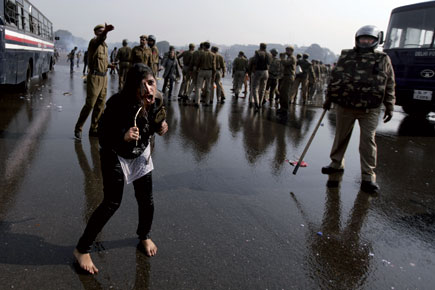 The rise of the New Rebel


A youth in good winter clothes getting hostile with the State’s SUV—this was till recently an image from a foreign land or Kashmir. In India, civilians in street battles against the Government used to look impoverished in a tropical way or they were not very serious, often waving from behind the television reporter, or laughing while fleeing the police. But now something has changed. There is a new crowd in the republic. Till not so long ago, they were never a crowd except in happy times—a college festival or a rock concert. But now they walk in giant furious swarms, having done their apprenticeship in rebellion under Team Anna last year, holding English placards, abusing the few politicians whose names they know. Nobody’s votebank, orphaned by their own republic, they march to some monument or other to become news. Last Saturday, in Delhi, they even felt the stick of the police, something Indians of a type, especially the young whose parents pay direct taxes, are not expected to experience.

On the night of 16 December, a student of physiotherapy, a girl whose identity will soon become known across the nation as ‘23-year-old physiotherapist’, was raped and tortured in other ways for nearly an hour in a moving bus by six men who then threw her out of the vehicle. In the days that followed, streams of enraged middleclass women and men in Delhi became a movement against their arch-enemy—the Government. But soon thugs and onlookers joined in for fun. In a protest against rape, women were felt up, the demonstration turned violent, the police retaliated, a TV reporter hit by a teargas shell lay in the arms of a baffled man as she moaned into the camera, “I have been injured.” One policeman died. Meanwhile, the ‘23-year-old physiotherapist’, her damaged small intestine entirely removed but for three inches of it, said from her hospital bed that she wanted to live, a statement that held within it a deep sorrow for those who cared.

By Christmas, the revolt appeared to be over. Was it because the new rebels had once again retreated to their safe islands? Or because they feared lathi charge and water cannons, and the Delhi Police, which had also done an apprenticeship under Hazare, had barricaded the roads leading to India Gate and shut down several Metro stations? Or was it because the world has changed so profoundly that the material assembly of people, with all its inconvenience, is merely symbolic and we must now accept that the core of an uprising is almost entirely on social networking sites? Just as print, which is inconvenient to purchase, has given way to digital, could it be that revolts too are casting aside their physical forms? Did Anna Hazare underestimate his powers when, in December 2011, he looked at his small crowd in Mumbai and fatally conceded defeat while his movement was expanding fast online? Does such a ghostly revolt conducted online, where the stakes are so low, have any meaning?

On Christmas afternoon, there were about 300 people on a 100 metre stretch of road near Jantar Mantar, where the Government had allowed protestors to gather. For every eight males here, there were two females. The protestors had divided themselves into small groups and the division was ordained by social backgrounds. The best dressed was a collegiate group that formed a ring and shouted slogans at each other. Is this another consequence of Facebook—people who agree with each other talking for hours with each other in a nook about the things they agree on? A boy rises and proposes what everybody has been proposing in different ways—“The rapists should be chemically castrated and then hanged.” One boy in the outer rings whispers to another, asking what ‘castrated’ means, and upon finding the meaning, fully supports the proposal.

Far from them is a larger group, which looks less affluent and draws several gawking onlookers. They do not speak English, but their slogan is in English—“We want justice.” A woman is trying to get the slogan-shouting going, but a man in a fur cap keeps giving short speeches in Hindi. He finally leaves in a huff when his voice is drowned by the English slogans. As he leaves he scolds them for speaking in English.

In another group, a boy proposes that they unite all groups so that they have the heft of a reasonable crowd, but the girls do not want to have anything to do with the other groups, especially the boys of the Akhil Bharatiya Vidyarthi Parishad, who are sitting on the road, their mouths gagged by a black band, and looking glum for a cameraman who is taking their close-ups. Their placards say there should be no trial for the rapists—just hanging.

It might have appeared on that Tuesday afternoon that the New Crowd had failed once again in bringing about a substantial uprising. But the fact is that unlike the anti-corruption stir, where the middleclass conveniently spared the corporates that sponsor large-scale corruption and targeted only the political class, the rape outrage achieved much. It not only shook Parliament, which does not take a rebellion to achieve these days anyway, but forced the tired system into action. All the perpetrators of the atrocity were nabbed within days, the victim is receiving the best medical attention, and rapes in rural areas too became news once again, if only for a short span.

Nine years ago, I went around Bombay asking a bunch of educated middleclass youth a set of elementary questions about current affairs. The idea was not to trick them or make them look bad, but to find out if the nation interested them at all. The questions included: what was ‘LOC’ in the film LOC Kargil? What was the VHP? Were general elections held for the Lok Sabha? Not many knew the answers. A very clever Muslim hairstylist had not heard of Narendra Modi. And, based on this survey, I wrote an article for Outlook in which I passed a confident analysis. It probably looks a bit foolish now, less than a decade later— ‘In a country that was always a revolution short, the winds of change will not come from its educated modern youth. They are passport Indians, just passing through a dirty birthplace.’

What happened? Why is the segment that appeared to have no stake in reforming the nation suddenly on the streets? A few years ago, goons of the Shiv Sena raided a Valentine’s Day party, molested girls, tore their clothes and beat up anyone they could. The boy who had hosted the party was brave; he held another party in defiance, which the thugs did not attack. There was outrage, but there were no street protests. Is it because the middleclass is not equipped to challenge the Shiv Sena on the streets? Is it because the incident occurred in Bombay and not in Delhi? Or has something changed? Is it the US economy? Is it more lucrative and reassuring now to live in India? The option of flying away to the West is not so attractive anymore, so might as well get involved in the fate of India? Is that it?