Modi Makes a Decisive Move in the UK

Modi has made the relationship more forward looking 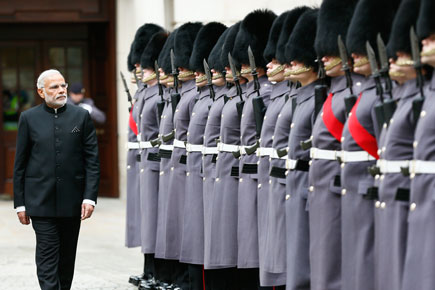 Away from the glare of television cameras and his domestic critics, Indian Prime Minister’s visit to the UK last week has managed to radically reshape the contours of the Indo-UK partnership. Where the media was keen to highlight the controversies surrounding Modi, he has managed to redefine Indo-UK relationship for the new century. Though the two countries sealed £9bn worth of commercial deals in the retail, logistics, energy, finance, IT, education and health sectors, it was the perceptual change in this bilateral relationship that will have a much lasting impact on the future trajectory of a relationship which was seemingly headed nowhere before this visit.

Modi’s visit came at a time when there were widespread doubts in the UK if New Delhi took the UK seriously at all despite British Prime Minister’s impressive outreach to India. Ever Since he came to office six years back, Cameron had made a serious effort to upgrade Indo-UK ties. In fact, in his first term, India was at the top of the list of emerging powers which his government decided to court. And they did make a serious effort only to be snubbed by then UPA govt. It is one of the reasons, why in Cameron's second term China has got a pride of place. Chinese President’s Xi Jinping’s successful visit to the UK last month resulted in two nations signing £40bn worth of contracts including for the project to build a nuclear power station in Britain. In one of the most significant shifts in British foreign policy in decades, Britain is trying to position itself as key partner of China in Europe. Modi therefore timely recognised that it was time for him to reciprocate Cameron's investment in India.

India and Britain had forged a 'strategic partnership' during the former British Prime Minister Tony Blair's visit to India in 2005 but it remained a partnership only in name. The Conservatives are keen on imparting it a new momentum. The UK is the largest European investor in India, and India is the second largest investor in the UK. Indian students are the second-largest group in Britain. There are significant historical, linguistic and cultural ties that remain untapped. But the Labour government's legacy for India is very complex and Cameron's government needed great diplomatic finesse to manage the challenges. This was particularly true of the issue of Kashmir where the Labour government could not help but irritate New Delhi. As late as 2009,  then Foreign Secretary David Miliband was hectoring the Indian government that the resolution of the Kashmir dispute is essential to solving the problem of extremism in South Asia. Cameron's government made a serious effort to jettison the traditional British approach towards the sub-continent in so far as it has decided to deal with India as a rising power, not merely as a South Asian entity that needs to be seen through the prism of Pakistan.
Indian diplomats have a tendency to say that the UK is nothing but 51st state of the US. While it may serve some rhetorical purpose, it is counterproductive to take such a myopic approach. In recent times, there has been a divergence between the US and the UK on a range of issues. Modi’s visit has managed to successfully put Indo-UK ties back on track and to redefine the terms of the relationship when India is no longer a supplicant but an emerging power, even providing jobs to the British economy. Modi’s visit to Jaguar Land Rover, which is owned by India's Tata Motors, was meant to underscore this changing dynamic. His outreach to the Indian diaspora also signalled the power of the British-Indian community in the UK politics. When Cameron mentioned the growing list of British-Indian MPs and suggested that soon a British-Indian might even the Prime Minister of the UK, he was merely stating the obvious.

Economics, of course, stands at the heart of Indo-UK relationship. Cameron wants to make the UK a part of Indian economy’s success story while Modi would like greater British investment supporting his ‘Make in India’ initiative. India can leverage other British advantages as well. From education, health, culture, infrastructure, science and high-technology to areas such as policing and intelligence, Britain is still a global leader. India needs to keep this in mind as it approaches its engagement with the UK. Britain is keen to share its expertise at this point to help in building capacities in India. India needs to be more receptive. Modi’s visit made it clear that he sees Britain as vital as India seeks to build its domestic economy.

More significantly, Modi has made the relationship more forward looking. He made an attempt to lay the legacy of Britain’s imperial past to rest when he suggested that "the soil of London" had given birth to India's "freedom struggle” referring to India’s numerous freedom fighters who studied in the UK. In the past, Pakistan was viewed as a key stumbling block in Indo-UK ties. Refreshingly, in his multiple public engagements in the UK, Modi never once mentioned Pakistan. The only reference to the Pakistan came in the Modi-Cameron joint statement in which the two leaders reiterated “their call for Pakistan to bring the perpetrators of the November 2008 terrorist attack in Mumbai to justice” even as they underscored their resolve “to work together to disrupt all financial and tactical support for terrorist networks including ISIL, al-Qaeda, Lashkar-e-Toiba, Hizb-ul-Mujahideen, the Haqqanis and associated groups.” The two sides managed to successfully conclude negotiations on a bilateral Civil Nuclear Cooperation Agreement signed in 2010 providing a framework for further cooperation and the UK reiterated its strong support for India’s permanent membership of the UN Security Council. The security partnership that Modi and Cameron have charted out is expansive covering a range of security issues and with the Indian defensiveness a thing of the past in so far engagement with like-minded countries is concerned, it is likely to yield great dividends.

Where the UK has failed is in articulating a broader strategic vision for its ties with India and this is related to its failure to view Asia beyond economics and trade. Modi had an opportunity to clarify some of these larger issues during his trip. Both sides seem to recognise the challenge. In the first speech by a serving Indian Prime Minister to the British Parliament, Modi said the UK and India were "two strong economies and two innovative societies" but their relationship "must set higher ambitions.” David Cameron has championed Indian interests like few British Prime Ministers in recent years. Though the rise of India as an economic power is transforming British attitudes towards India across the political spectrum, the opposition Labour Party continues to see India through the lens of human rights and the impact of its Pakistani immigrant support base remains strong. So a robust partnership with the Tory government is a good idea for India. Modi’s visit has succeeded in changing the course of the Indo-UK ties considerably. It will be now up to the two nations to build on its success.