Modi in UAE: Bridging the Gulf 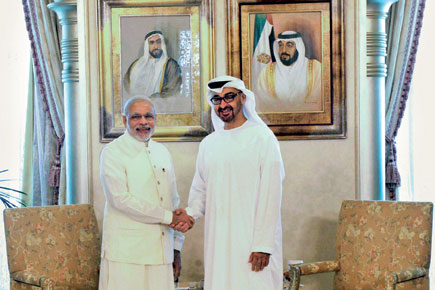 In what has become Prime Minister Narendra Modi’s trademark, he sets out an ambitious agenda for his foreign visits and manages to deliver beyond expectations. This has happened again with his visit to the United Arab Emirates (UAE). It was symbolically an important visit. This was the first visit by an Indian prime minister to the UAE in 34 years after then Prime Minister Indira Gandhi visited the Emirates in 1981. Former Prime Minister Manmohan Singh was to travel to the UAE in March 2013, but the visit was cancelled at the last minute. For Modi himself, it was his maiden visit to an Islamic country and so was keenly watched by his political opponents at home.

True to his style, Modi visited the Sheikh Zayed Mosque and praised the tenets of Islam even as he managed to secure land allotment from the UAE government for construction of a temple in Abu Dhabi. Much like his previous visits, he reached out to the Indian community in the UAE—about 2.6 million strong— in a way that only he can. But this time, his audience was largely one of blue-collared workers . His outreach involved not only an address to a packed stadium but also a visit to an Indian workers’ camp in Abu Dhabi.

But it was the substance of the joint statement issued by Modi and Crown Prince Mohammed bin Zayed Al Nahyan that managed to redefine the contours of a relationship that had long been bereft of political heft. Both sides denounced and opposed terrorism in ‘all forms and manifestations, wherever committed and by whomever, calling on all states to reject and abandon the use of terrorism against other countries, dismantle terrorism infrastructures where they exist, and bring perpetrators of terrorism to justice.’ At a time when violence has been rising on the border with Pakistan and National Security Advisor-level talks are to begin, the target was clearly Pakistan as the two nations came down strongly on countries sponsoring terror against other states. That Modi could get the UAE, one of the countries closest to Pakistan, to deliver such a message shows how well Modi has read the changing strategic realities of the Middle East. This is a real diplomatic triumph. The UAE’s endorsement of India’s concerns on terror and extremism underscores the challenges facing the Gulf kingdoms at a time when the Islamic State is rising and a sectarian divide in the region is widening.

Trade and investment has also got a boost with Modi’s visit. The UAE’s decision to step up investment in India, including through the establishment of a UAE-India Infrastructure Investment Fund with a target of $75 billion, will be welcome news for the Modi Government at a time when many are questioning its credibility in the realm of economics. The UAE will be helping Indian companies invest in infrastructure development in the Gulf country and will also be tapping India’s expertise in small and medium enterprises.

Modi’s visit to the UAE has once again brought into focus India’s changing role in the Middle East, where it has significant stakes which are rising by the day.

India’s policy toward the Middle East has often been viewed through the prism of Indo–Iranian relations. The international community, and the West in particular, has been obsessed with New Delhi’s ties with Tehran, while missing India’s far more substantive simultaneous engagement with Arab Gulf states and Israel. India’s engagements with the Arab states in the Middle East have gained momentum in the last few years, even as Iran hogged the limelight.

India wants to secure energy supplies and consolidate economic and trade relations with states of the Gulf Cooperation Council—Bahrain, Kuwait, Oman, Qatar, Saudi Arabia and the UAE—that have adopted a ‘Look East’ policy, which allows them to carve out a much more substantive relationship with India than in the past. The economic dimension of India’s Gulf policy has become more pronounced in recent years. As a group, the GCC is India’s second-largest trading partner, the largest single origin of imports to India, and the second largest destination for exports from India. The UAE itself was the third largest trading partner of India in 2014-15, after the US and China, with bilateral trade of $60 billion. The GCC countries supply 45 per cent of India’s petroleum, with the UAE being the sixth largest source of oil.

The GCC countries remain a major destination for Indian investment, even as India makes concerted attempts to encourage GCC investment in India. India hopes that major members such as Saudi Arabia, the UAE and Oman will participate in India’s infrastructure expansion. With rising demand for infrastructure development, India is looking for large investments from the Gulf, which is flush with funds after a sustained phase of high oil prices. The Gulf states meanwhile are interested in human resources from India in order to develop sectors as varied as information technology, construction, transportation and services.

Energy is clearly the driving force in Gulf–Indian relations. Apart from the UAE, Saudi Arabia, Kuwait and Oman are major sources of oil supply. Qatar remains India’s exclusive supplier of natural gas, annually supplying five million tonnes of LNG to India. The Iranian government’s decision to renege on some oil supply commitments, after India’s vote against Iran at the International Atomic Enegery Agency (IAEA), has also spurred New Delhi to diversify its set of energy suppliers.

India’s trade and energy security is inextricably linked to the security of the Straits of Hormuz and Bab el-Mandeb. With this in mind, the Indian Navy regularly visits Gulf ports and conducts training sessions with states in the region. The Indian Navy has undertaken a series of naval exercises with a number of Gulf states in recent years, thereby lending New Delhi’s diplomacy a hand in the region. Indian naval warships have also been deployed in the Gulf of Aden for anti-piracy patrols on the route usually taken by Indian commercial vessels between Salalah in Oman and Aden in Yemen. The Gulf of Aden is a strategic choke point in the Indian Ocean, given that it acts as a gateway for access to the Suez Canal through which a substantial portion of India’s trade flows.

Indians are the largest expatriate community in the GCC states, numbering around 7 million overall. Indian expatriate labour constitutes around 30 per cent of the UAE’s population, and Indians have a significant presence in Bahrain, Oman and Qatar. India receives remittances worth around $6 billion annually from Gulf NRIs, which have contributed significantly to India’s economic resurgence, even as there have been growing concerns in recent years about the living and working conditions of Indian workers in these host countries. To help them, India is pursuing manpower and labour agreements with Gulf states.

For all these reasons, Modi’s visit to the UAE was significant and it has once again underlined India’s continuing stakes in a region that is passing through a period of momentous change. Much like the regional states, India would also like a stable balance of power to emerge in a region riven with multiple fault-lines. It was this that led to a much more cautious approach from New Delhi to the Arab revolutions in the beginning, compared to that of the West, and then rapid overtures to new regimes once they emerged. Not only have the political transitions not been easy for the countries affected by the Arab Spring, but the great tumult in the Middle East is testing the resolve of the international community in tackling difficult issues in the region. All major global powers are struggling with tough choices as they try to strike a balance between their values and strategic interests in crafting a response to the still-unfolding crisis in the region. India is no exception.

Developments in the Middle East will have a great bearing on the future of India’s ties with the region. Indian policy seems to be favouring the status quo as regional stability is essential for Indian interests there. The rivalry between Saudi Arabia and Iran for regional leadership is likely to intensify along sectarian lines in the coming years. Given India’s growing stakes in the Gulf, it will be forced to maintain a delicate balance between these two regional rivals. India’s cautious response to the Arab Spring and its aftermath is a testament to India’s belief that its policy of engaging various stakeholders in the region is the only one that would help New Delhi preserve and enhance its interests in the short to medium term.

Modi’s successful visit to the UAE has given a fillip to Indian diplomacy in a strategically vital region. It will be important for his government to keep the region firmly on the radar if New Delhi wants to preserve its equities in the Gulf and wider Middle East.