Modi and Pope Francis: India’s Evangelist and God’s Pauper in a Moral Fable 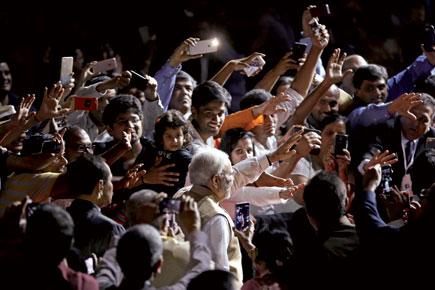 Narendra Modi was in America, for the second time as Prime Minister, in a season of heavy VVIP traffic in New York and Washington. All the usual suspects were there, potentates and warlords, statesmen and dictators, making their appearance and spouting their customary peeves and platitudes at the annual talking shop of the UN. And all said, photo ops on the Potomac, or a selfie with Potus, matter for every visitor, irrespective of their anti-Americanism or totalitarian temptations, for this is a place and an invocation, an idea and an argument, an aspiration and an obsession that permeates global politics, no matter what screed of ‘decline-ism’ you have lately read about America. The centre of gravity has not shifted, and Beijing is still a faraway place of paranoia in pinstripes despite the size of its economy or the power of the PLA. It is not yet Past Americana.

Three of them stood out. It was Xi Jinping’s first official visit to America as the new helmsman, and he was also the guest America was weary of. Xi may have got more op-ed attention than any other visitor, but then China is getting increasingly hyphenated to America in the global power structure, courtesy what you may call social capitalism, or a market economy supervised by Confucius and Lenin. China never ceases to be a part of domestic rhetoric, particularly in an election season, and depending on the ideological credentials of the candidate, the narrative could swing between the ‘butchers of Beijing’ and the ‘job stealers’ from the East. And for the latest updates, follow Donald Trump. Xi got a reception worthy of the new imperial cult in China, and it was respectful and business-like, and less theatre. Formal and cheerless it was, so let us move from the emperor to the evangelist.

Nothing works like moral evangelism when political leadership is increasingly content-free and emotion-proof. Francis, as a religious noun, evokes the morality of suffering, the aura of austerity, and the psalm of the poor. Pope Francis has not only brought the poignancy of ordinariness to the Vatican, his evangelism has even defied the sexual taboos of Catholicism—he is not one to judge people’s choices. Francis was in America at a time when the many profanities of politics were being glossed over at the UN, and Washington itself was not the capital of moral leadership. What makes this Jesuit an intimate messenger of reconciliation is his own story, which stretches back to the slums of Argentina. The orthodoxies of St Peter’s rock are less stifling when this shepherd wants to be more inclusive than what its harshest defenders desire. If Pope John Paul II defeated communism in East Europe, Pope Francis wants the restoration of God in an unequal world. It is the portrait of the pope as a globetrotting pauper.

Then there was Narendra Modi, and this time round, the theatre had been shifted to a place more ideal for the performer. Modi in Silicon Valley was proselytiser, fellow dreamer, and hardseller. We are not surprised. You could make a case that global diplomacy for this Prime Minister is a perfect blend of patriotic kitsch, nationalist pride and simulated intimacy—the people’s Prime Minister loves backdrops as big as his ambition. You could also say that in him merge the curiosity of a traveller, the excitement of a tourist and the poise of a statesman. In another time, in the afterglow of de-colonisation, Nehru, our first internationalist in power, faced the world with the argumentative mind of a sophisticate; he was an aristocrat who could afford the intellectual luxury of socialism. There was nothing to aspire for; there was only the argument. In retrospect, a losing one.

Modi in power is still the outsider who has not abandoned wonderment, and it is human to be excited. It is even prime ministerial. Silicon Valley is capitalism enriched by subversion. It is where the pyramid of power is flattened by the revolution of the outsider who accepts no authority other than the mind that is better than his. In an unequal world, where the wealth gap spawns the politics of resentment, the Valley challenges disparity by being inventive. It is the place where class and colour are unmade by the possibilities of the new. Here capitalism in a turtleneck outsmarts the pinstriped pachyderms of the marketplace.

Modi was at home. Punditry was asking him to learn from the Valley. It was wrong advice. He is very much the silicon statesman, the outsider who has shattered the idyll of the status quo. He is where he is not because of entitlement; he has defied the establishment, within and without his party system. His journey from the remoteness of dispossession to the highest seat of power essays dreaming and daring. In a conversation between Mark Zuckerberg and Modi, the Facebook founder said, “We have many things in common. Family is very important to us. Both my parents are here. I understand your mother is very important in your life.” Modi, tears welling up in his eyes, reacted: “I come from a poor family. You probably know that I used to sell tea at the railway station. My mother took a lot of pain to raise me. She used to clean dishes, work as labourer…” Biography is more than destiny. It is a calling card in the moral universe of the outsider—or in a world waiting to be led by humans, not holograms.

That is why the princeling turned emperor is not the one the world is listening to. And that is why Francis and Modi, united by the iconography of ghettos-to-glory, are travellers indulged in a world that misses moral fables. The Franciscan mendicant and the Hindu evangelist are heroes in an age when morality needs new storytellers.