Miffed VS Achuthanandan leaves party meet in a huff 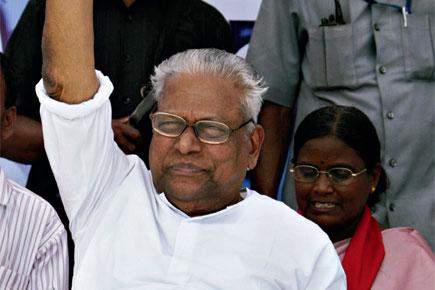 A high voltage drama was witnessed at the CPM state conference in Alappuzha when former Kerala chief minister VS Achuthanandan walked out of the conference in a huff here on Saturday. Sources close to VS feel that the battle between him and the official faction of the party has reached a flash point and he is all set to quit the party. However, VS has remained tight lipped on the issue. It is said that VS went out of the conference hall bidding farewell to the general secretary Prakash Karat who unsuccessfully tried to pacify the nonagenarian leader. The Politburo of the party is expected to meet in the evening today to discuss the issue.

Earlier, Pinarayi Vijayan, the Kerala state secretary of CPM, addressed the media in Alappuzha, with an unusual body language. The man, who has an uncanny ability to keep the media guessing, was unusually cool and smiling when he read out the resolution passed at the state committee meeting.

The resolution was critical of VS Achuthanandan, the rebellious nonagenarian in the party, who had walked out of the CPI national council in 1964 to form CPM. The resolution against V S according to Vijayan was unanimously adopted by the state committee. The dissent note presented by V S against the alleged ‘wrong doings’ by the party leadership was rejected by the committee.

The same note was ‘leaked out’ to Malayalam Manorama (the newspaper which has been consistently against the CPM and V S in particular over the couple of decades) and was carried unedited. In the note, VS blamed Pinarayi for taking the party in the wrong direction. VS accused that the leaning towards a right wing ideology helped only in eroding the mass base of the party. In the note, VS argued that the Party had to pay heavily for the murder of T P Chandrasekharan and the lenience shown by Pinarayi towards those who committed the crime. The party under the leadership of Pinarayi miserably failed in making political gain from the recent struggle against the solar corruption.

However, Pinarayi explained that the dissent note which was given to the party and published by the media was a blatant violation of the party discipline. It only shows that VS is determined to continue violating the party discipline despite the action taken against him in 2009. (VS was pulled out of the Politburo in 2009 for violating the discipline by speaking against the leadership and supplying headlines to the media by leaking out the information of internal infighting).

Though Pinarayi read out the resolution there was hardly any mention of an action being taken on the issue. It is apparent that disciplinary action would be taken in the upcoming party congress to be held in Vijayawada. The political commentators observe that this unusual press conference minutes before the commencement of the state conference was a smart move by Pinarayi to prevent the delegates from speaking up in favour of VS. This is indeed a clear indication of what the party wants to achieve in the state conference as well as the 21st Party congress.

The resolution unanimously adopted by the Party (according to the official faction) rejected the claims made by VS. It said that the argument that Party ended up nowhere in the struggle against solar corruption is false. In the dissent note, VS said that the UDF Government has ever been willing to go for a judicial investigation, but CPM wanted nothing less than the resignation of the Chief Minister. On the contrary, the party accepted the proposal for judicial enquiry and put an abrupt end to the struggle.

Pinarayi also blamed VS for not standing by the party in the times of crisis. He mentioned the role VS played in worsening the situation by his visits to Onchiyam (the native of slain T P Chandrasekharan). VS in his note claimed that he visited the place according to the decision taken by the party to bring the comrades back to the party including Chandrasekharan. However, Pinarayi made no mention of the VS’ accusation about his lenience towards those involved in the murder of TP.

The hitting out by Pinarayi against VS has put an end to the long standing claim that the factionalism in the party is nothing but an imagination of the media. It was no secret that VS and Pinarayi had not been even in talking terms. The base that VS had in the party has been considerably weakened since the last Party congress and Pinarayi has successfully managed in displacing the VS supporters one by one from the higher committees.

However, any disciplinary action against VS would not be a wise move as the ‘mass appeal’ for this nonagenarian communist is still strong irrespective of what the party thinks about him. Ironically the same man, VS who had been dubbed as a renegade by the party state unit, hoisted the red flag at the venue of the state conference marking its commencement on Friday.