Measuring up to Hrithik 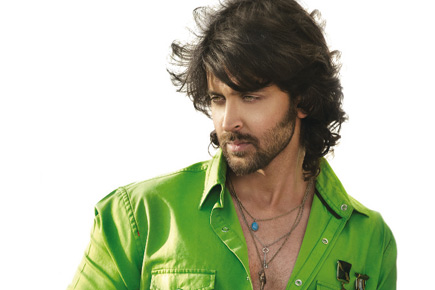 
Who’d have thought Bollywood’s most unprofessional star, Sanjay Dutt, would be inspired to turn over a new leaf thanks to Hrithik Roshan?

Dutt, who’s been shooting in Diu lately with Hrithik for an Agneepath remake, has apparently decided that he doesn’t want his light-eyed co-star to steal the spotlight from him when the film opens at cinemas later this year. So the out-of-shape 50-year-old is believed to be sweating it out in the gym for two hours daily and is allegedly on a strict diet to lose the beer belly he’s been sporting.

It appears Dutt’s buddies Salman Khan and Ajay Devgan may have warned him against coming off as a slob opposite Hrithik, and suggested that he quickly get into shape. Not only is he showing commitment towards his physical appearance, insiders say Dutt has pulled up his socks as far as his on-set behaviour and professionalism is concerned too. For one, the actor volunteered to shave his head for the part instead of going through the trouble of putting on a bald cap each morning and sitting for hours in the make-up and prosthetics chair. (Never mind the fact that his other producers are horrified about continuity problems that are sure to arise in their own shooting schedules, courtesy the bald look!)

There’s also news coming in from the set that Dutt doesn’t keep the unit waiting for hours. Notorious for arriving at 2 pm for 9 am shifts, the actor is believed to have requested that his shooting days start at noon, and has surprised his team by landing up for work on time. While some say he’s on his best behaviour because he shared a close relationship with Agneepath producer Karan Johar’s late father Yash Johar, there are those who swear it is the fear of being overshadowed by his Mission Kashmir co-star that is keeping Dutt on his toes.

While on Hrithik Roshan, it seems the actor is less than pleased about the way things are going with his television show, Just Dance. Famously particular about rehearsals and preparation, Hrithik is reportedly unhappy that the medium allows him little time to perfect his performances before they’re recorded for airing.

It turns out the actor has confided in close friends that he expected more out of his television debut. He has said he finds it disconcerting that the channel and show’s producers aren’t striving for excellence.

The actor has been insisting on rehearsing every episode down to the last detail, but he’s repeatedly being told that reality shows don’t work that way. There is also some talk that his co-judges, choreographers Farah Khan and Vaibhavi Merchant, are getting impatient with his perfectionist attitude and have asked him to embrace the spontaneity that television offers.

All Is Fair in Love on the Rebound

This amiable actress may have denied rumours that she hooked up with her American co-star (in an international film she’s been shooting lately), but ask anyone on the unit of that film and they have a different story to tell. Apparently, the red-hot siren, who’d just broken up with her boyfriend of many years, was inseparable from her firang leading man while they were shooting in Rajasthan recently.

Unit members swear she regularly retired to her co-actor’s suite every evening after pack-up, and only returned to her own room every morning in time to get into make-up for the day’s shoot. Her friends are calling it a rebound relationship, and insist that there’s no crime in two single individuals getting cozy.

Fair enough. But it’s the actress’ own repeated denials of the romance that make the whole thing sound sleazy.