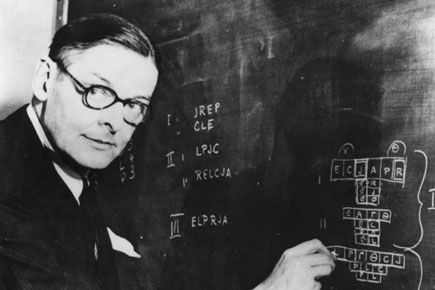 It is in the mood of the times that the news item was buried deep inside The Times of India on the last of its ‘Nation’ pages on Tuesday. The headline said, ‘Eliot, Keats dropped for desi writers in Raj textbooks’. The report said that in the revised textbook of Class VIII, poems ‘by the likes of John Keats, Thomas Hardy, William Blake, TS Eliot and Edward Lear’ had been replaced, presumably with local talent.

Of the latter, two names— Rabindranath Tagore and Swami Vivekananda—you shouldn’t have a quibble with. In literature, Tagore is worthy enough to stand alongside Eliot or Keats. But beyond that, this change is good enough to be part of the dumbing down project that this country is so much in love with. As the article says, ‘So while Hardy’s ‘When I Set Out For Lyonnesse’, Eliot’s ‘Macavity: The Mystery Cat’ and Blake’s ‘The School Boy’ have been dropped, works such as ‘My first visit to the bank’, ‘The Brave Lady of Rajasthan’, ‘Chittor’, ‘Sangita the brave girl’ have been included in the first lot of revised textbooks that have arrived at state textbook depots in Ajmer, Udaipur, Dausa, Bharatpur and Jaipur.’

Any parent with even a cursory interest in his or her Eighth Standard child’s education shouldn’t find it difficult to choose between Macavity and My First Visit to the Bank. The poem might be ordinary by Eliot standards but it is still an introduction to one of the greatest figures of English literature. The stated reason for this change that showed Eliot the door is a policy of the Rajasthan government’s education department ‘to include content that evokes a sense of pride in the state and the country’.

That, coincidentally, is also a guiding strategy underpinning political propaganda down the ages which aims to create automatons loaded with values that sound good and mean nothing. Why, you could ask, is it necessary to instill a ‘sense of pride’ about the state or country? If there is substance, pride will follow. For example, if a country is spotlessly clean, then its people will be proud of it. If it is a sewer in large parts, then non-proud people will walk around holding their noses. And if they were taught to be free thinking, they will question why the municipality worker is not coming with his broom. It is the hallmark of countries like North Korea that they say ‘thank you’ daily to dictators who starve and murder them because in school they were taught to be proud of their country.

There is, however, a strong case for introducing great regional works in place of an Eliot or a Hardy. But even that will not happen if the objective is not the education and refining of human minds but instillation of pride. In the textbook, the department has also removed a short story by Ismat Chugtai because, apparently, Urdu was just too difficult to learn. What remains is therefore My First Visit to the Bank and the enormous pride that comes from it, even if, by the time these school children grow up, they will probably do all their banking on their mobile phones.