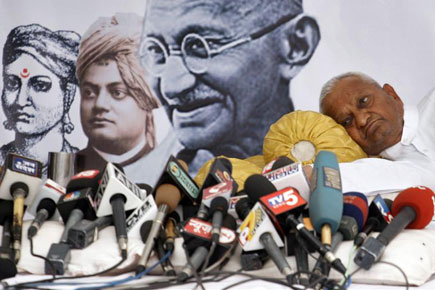 
As the drama over the Lokpal Bill finally looks like reaching some sort of conclusion, notwithstanding Anna Hazare’s threat of another public fast to achieve an aim that’s still unclear, it is time to look at the lessons we can draw. While Anna and his cohorts continue to insist that the Government draft suffers from a number of handicaps, it remains true that in substance the Government version is substantially dependent on the Anna draft. Too much time has been spent debating the office of the Prime Minister and too little has been spent on the shortcomings of this Anna draft, which have found their way unchanged into the Government version.

The National Campaign for People’s Right to Information (NCPRI) has now come up with suggestions of its own to address some of these issues. Given the body’s close association with the National Advisory Council (NCPRI convener Nikhil Dey and NAC member Aruna Roy have been key to the campaign that led to the NREGA and RTI Act), questions will be asked about the timing and motives of their current intervention. But that does not take away from the validity of the points they are raising.

The most important of these relates to the overarching reach of the Lokpal even in its watered-down avatar. In Dey’s words, it seeks to be both a mechanism for dealing with high corruption such as the 2G scam, and a grievance redressal mechanism at the same time. In actual fact, these are very different issues; they require very different approaches, and as the NCPRI has rightly suggested, call for not one Bill but two—a Lokpal for corruption and a grievance redressal authority for the day-to-day issues we mostly face. Dey has also rightly suggested that there are several contentious areas of the Lokpal Bill which are better dealt with by strengthening existing institutions such as the CVC, or bills under consideration, such as those that deal with judicial accountability and protection for whistleblowers. In aiming to be all things to all people, the current Bill actually comes close to filling none of its desired objectives.

Clearly, we need to relook at the process of consultation with the public in the drafting of legislation. The NREGA, the RTI and now the Lokpal Bill have all involved a very visible participation of civil society. But what Anna and his team have unwittingly revealed is that civil society is a very nebulous term, and any set of self-appointed people can decide to speak on behalf of the people, give or take a few TV channels. Neither is the NAC a better solution, even as it involves itself in the preparation of a number of important legislations such as the Food Security Bill. Members of that body have been appointed in an ad hoc manner, and seem to answer to no one but Sonia Gandhi. That hardly counts as public representation.

Even so, all the three legislations mentioned above have been improved by such ad hoc interventions. In effect, widening the process of consultation can only be an improvement over the current process where even very important legislations pass unnoticed, and with very little discussion, through Parliament. Section 4(1)(c) of the RTI Act already calls upon the Government to  ‘publish all relevant facts while formulating important policies or announcing the decisions which affect public’ (sic). And in one of its judgments, the Central Information Commission has directed the Delhi government to ‘develop a credible mechanism in all departments for proactive and timely disclosure of draft legislations/policies and amendments thereto or to existing laws/policies in the public domain’. This should, in principle, apply to all state governments and the Union Government.

The availability of such information can be the beginning of a wider consultative process that is now the norm in most democracies. Providing such a framework is perhaps the best defence against the ad hoc nature of movements such as the one driven by Anna Hazare, or, for that matter, the arbitrariness of the NAC. More importantly, it can serve to drastically improve the legislative functioning of Parliament, which is after all its true purpose and one that has been considerably diluted in the attempt by parliamentarians to serve as conduits of services to their constituents, a job more suited to municipal councillors and sarpanches. There is no shortage of models available for such a pre-legislative consultation process with the public; it is now the norm across the world. Moreover, given the time the process of framing a bill already takes in the Indian system, transparency and consultation at each step can only speed things up. Far more important than the Lokpal Bill, if the current chaos manages to institutionalise this process, we would have actually gained something important from the Anna Hazares and Baba Ramdevs of this world.