Another radical suggestion for Veerappa Moily to reduce fuel consumption 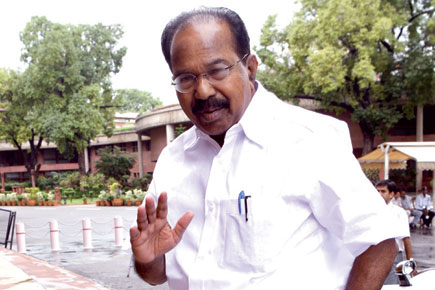 Another radical suggestion for Veerappa Moily to reduce fuel consumption


Now that Union Petroleum Minister Veerappa Moily, suitably chastened for not being able to filter stupidity from austerity, has wriggled out by saying that the suggestion to close petrol pumps between 8 pm and 8 am was only one of the many floated around his head by other people, let us consider the mind that entertains such ideas. What does it say about someone who thinks people who don’t fill fuel in their cars at night will not fill it the next morning and thus save India fuel?

Was he wildly optimistic or plain dumb? Is he cunningly doling out class justice by making the car owner, who sees the petrol pump closed at night, return the next morning to suffer horrifyingly serpentine queues and thus making rich and poor equal under the white sky?

Even if you give Moily that generous benefit of doubt of being ingeniously Communist, there is still the question of the fuel that needs to be saved. For that, the car owner has to take a bus or train, and public transport has to be as comfortable as his car. It can happen. You can see the slightest hint of it in Delhi, where many who have vehicles and can afford drivers use the Metro. For public transport to become a viable option, all states and every route in Delhi must meet similar standards. But how do you radically improve public transport in a country with a thousand departments, a thousand bureaucrats heading them and a thousand politicians to whom they report—most of them indifferent, corrupt and incompetent?

There is a simple solution. Right now, senior bureaucrats and ministers live near their offices occupying prime real estate. They are the only ones who can improve public transport and they never take it. Make all of them shift to distant suburbs, force them to take a bus or train on their way to work and then lean back to watch a miracle happen.

The system works in India whenever there are private interests involved. Make it their private interest to improve public transport and it will improve. You can catch the efficacy of this solution by considering a tactic that many drivers in Mumbai use. If they happen to see a minister’s car with a light on top, they immediately attach themselves to the entourage and traffic lights go green one after another. They zip through like a bumblebee for whom the petals of a flower are opening up.

If you shift Maharashtra Chief Minister Prithviraj Chavan’s residence to Virar on the outskirts of Mumbai and he is made to do a two-hour daily journey on a fast train to Churchgate hanging on the door sill with his finger and just one big toe on the floor, within months they will find a way to increase the number of trains so that Chavan can sit and go. They will even make all the trains air-conditioned and put leather seats as long as they don’t know which train Chavan will take. Or imagine, in Delhi, if Sonia Gandhi were made to shift to a flat in Dwarka and had to commute by bus to her office daily like any other woman facing the same tribulations, there would not be a single dirty old man on that route. If she had to daily take an auto at random, no auto driver would dare refuse a fare. Spread out all the ministers across every nook and corner of the suburbs and the public transport on every route in every city will become fantastic. Everyone would use it and all cars would be parked at home and all that fuel saved.

This will obviously not happen. The first reaction of any government to a crisis is a hasty reaction designed to be useless but guaranteed to make people miserable. The 8 pm to 8 am idea has been shelved, but Moily is already speaking of a comprehensive policy. You can bet your life it will be dos and don’ts only for the public at large. Austerity is always for other people.