How to be a Bold Young Mother to a Grown Man 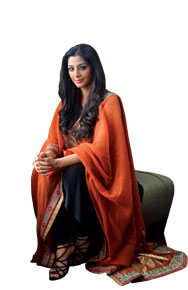 Irrfan Khan, Tabu, Kay Kay Menon, Shahid Kapoor, Shraddha Kapoor…Vishal Bhardwaj assembled a terrific cast for his Hamlet adaptation Haider, but contrary to what one would imagine, not every actor was drawn to the project like bees to honey. The director revealed to me that it was hardest convincing Tabu to take the role of Hamlet’s mother: “She refused the film twice, insisting she wouldn’t play mother to Shahid Kapoor.”

He understands her reluctance, he says. “There is a tendency in this industry to stereotype actors. And naturally she was concerned that if she played mother to a grown man once, she’d be approached only for mother roles here on.” But the project needed a solid actor in that role, so the options were limited. “When I went back to her for the third time, I asked her to see the character as Gertrude from Hamlet, not Shahid’s mother,” Vishal explains. “There’s so much to Gertrude, and she’s crucial to the story.” Tabu relented subsequently, and Vishal insists her performance is what holds the film together.

Not one to shy away from uncomfortable material, Vishal embraced the Oedipal undertones in the relationship between mother and son. In one scene that I was invited to watch, Shahid’s Haider enters Tabu’s room as she sits before the mirror beautifying herself. She reminds him how as a boy he’d insist on sleeping between her and his father, and would get upset each time his father so much as touched her. “And now my uncle touches you,” he replies stingingly, while lovingly applying perfume to her neck. Her wordless reactions alone may be worth the price of a ticket. Pretty bold too for a commercial Hindi film, you’d have to agree.

What Vishal didn’t tell me however, but I learnt from asking around, is that Tabu took the part only after the director agreed to make the character Haider’s stepmother and not his birth mother, thereby conveying to the audience that she was considerably younger than his father, and not necessarily much older to him. Shrewd.

The Courage to Trust

Karan Johar probably won’t be thrilled to hear this, but Rani Mukerji and Aditya Chopra weren’t entirely sure they could trust him with their secret.

When the couple decided to marry in an idyllic town in Italy in April, only very close family and friends were informed and invited. That included Karan, who is childhood buddies with Aditya, and who is close to Rani too, who he directed in her breakout film, Kuch Kuch Hota Hai; incidentally, on Aditya’s recommendation.

The actress revealed to me that the couple wanted to keep the date and other details of their nuptials a secret (particularly from the media) until the deed was done, and begged their guests to respect their request for privacy. “We were only worried about Karan,” Rani admitted. “But he surprised us. He didn’t talk about it to anyone. And that must be a record for him,” she added jokingly.

The news of the marriage didn’t reach the tabloids until the day after the couple had tied the knot and via a press release from Yash Raj Films, Aditya’s production banner. The couple had managed to hold on to their secret, and Karan had kept his word.

The director of an unreleased big-budget blockbuster film is reportedly losing hair because of an undisciplined young actor and his surprising lack of commitment. The filmmaker has apparently complained to friends that the actor, sprog of a respected veteran talent, often goes uncommunicado without warning, thereby causing the filmmaker “too much stress”.

Defending his admittedly erratic behaviour, the actor’s camp insists he’s never been a part of such a major production and is merely overwhelmed. “He isn’t used to being on call 24 x 7, but he’s learning,” a source close to him explains. “He’s grateful for the opportunity, but he’s figuring things out as he goes.”