How They Say Cheers 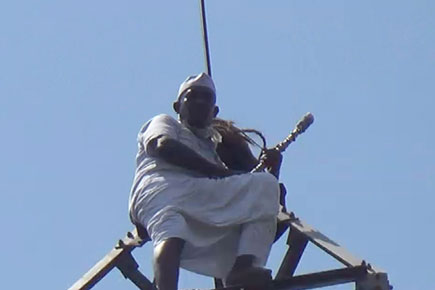 Tamilians are not really known for love of the middle path. It is a state where people commit suicide when their leaders go to jail and riots break out over arguments about who is a better actor. Everything is at a heightened intensity.

Recently, a corporator in Trichy came with two human skulls to the town’s Council to make a point on bodies being burned en masse in crematoriums. Other corporators tried to grab him, and in the proceedings the skulls fell down and shattered into pieces. Does such a society need alcohol to keep its juices going? Of course not, and, as the realisation grows, it takes unusual forms.

Demand for total prohibition has always been an undercurrent in Tamil Nadu, but lately it has escalated following the death of a social activist during one such protest. Sasi Perumal, according to an Indian Express report, ‘climbed a 120-foot mobile phone tower, holding five litres kerosene and a bundle of cloth and threatening self-immolation.’ He and his fellow protestors had wanted a liquor shop in the area shut down and they did get that promise in five hours but by then ‘Perumal was looking dizzy and vomiting blood; he could not climb down. He was brought down and taken to hospital, where he was declared dead on arrival. The FIR lodged by the police said he hanged himself before the rescue team could reach him.’

There is no mystery in someone climbing up 120 feet and threatening immolation, and then the police citing death by hanging—it is in keeping with their fertile imagination. This is also a state where college students come out onto the streets demanding prohibition and get arrested as happened this Tuesday.

You can understand the agitation of a Gandhian like Perumal, but students asking for a booze ban in a free society seems somewhat callous to all the other students who want the right to experiment with mind altering substances. Also, the history of policing has a large chapter on drunk students getting arrested, but it would barely have a few lines on sober students who don’t want others to get drunk.

Almost the entire opposition, including the DMK, has now come together demanding total prohibition in Tamil Nadu. While men drink, it does not decide their vote (except when they sell it in return for a bottle) but prohibition gets the votes of women which will come in handy when the state goes to polls next year. The ruling AIADMK’s argument is that it is in favour of making the state liquor- free, but a ban is simply not practical to enforce.

But that is not the reason why it doesn’t implement prohibition. The minute the party loses power, it will also demand it. The only reason the men of Tamil Nadu will continue to get their booze is simple greed. There needs to be money for all the subsidised food doled out in Amma canteens, and alcohol is the easiest way to generate it. You can tax it at will and the agitation of alcoholics does not count.