Guess Who Kissed and Made Up

No Golden Crowns, Please! • High and Dry in LA 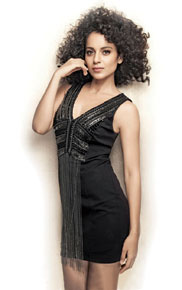 From the warm vibes they shared at the party that Sanjay Leela Bhansali threw to celebrate being awarded the Padma Shri last week, it was clear that the filmmaker and his Devdas star Shah Rukh Khan have buried the hatchet. The pair famously got into a war of words a few years ago when their respective films clashed at the box-office on the same Diwali weekend. SRK, in his typical headline-making style, had declared in an interview that his Om Shanti Om would “destroy” Bhansali’s Saawariya. The incensed filmmaker responded by saying that it was “petty” of Shah Rukh to attack a film that starred newcomers and that he didn’t put food on their table for him to be able to destroy them.

Bhansali and SRK reportedly addressed their issues a while ago, and even flirted briefly with the idea of working together in Bajirao Mastani. But the director eventually settled on Ranveer Singh, when he reportedly got the feeling that Shah Rukh didn’t have his heart set on doing the film. Perhaps Bhansali will also extend an olive branch to Salman Khan, who is apparently still sulking with the filmmaker for not casting him in Devdas, Guzaarish, Ram-Leela, or Bajirao Mastani. Salman has repeatedly told friends that he feels betrayed by the filmmaker whose career he helped “put back on track” by working with him again in Hum Dil De Chuke Sanam despite the failure of Khamoshi.

Kangana Ranaut, who’d made it very clear that she wouldn’t be attending any Bollywood award ceremonies, was at a gathering last Saturday that included fellow awards- boycotter Aamir Khan. The actors were in a group that included writer Prasoon Joshi, producer Sunil Bohra and others, while at the opposite end of town the Filmfare Awards were being handed out. It was Rekha who accepted Kangana’s Best Actress award for Queen, and drove all the way to the actress’ home at three o’clock in the morning to hand it over to her personally with a bouquet of flowers. A source reveals that Kangana had no intention of accepting any trophies, but she was floored by Rekha’s warm gesture, and couldn’t say ‘no’ when the Kanjeevaram-draped legend showed up at her doorstep.

Kangana’s allergy to Bollywood awards began a few years ago when she openly accused the entire system of being biased. She rightfully pointed out that there is no surprise left in awards anymore; winners are pre-informed and performers at the big show are invariably appeased with some trophy or the other, and any winner unwilling to attend is just passed over for a nominee who is. These are many of the same points Aamir Khan raised when he stopped attending Bollywood award functions. It’s also what Ajay Devgn has said to justify why he doesn’t participate in the “circus” anymore. Just weeks ago, Deepika Padukone, when she was declared Best Actress (Popular) at the Screen Awards, went on stage and accepted the award, but said that she believes “this year belonged to Kangana. So Kangana, this one’s for you.” When later asked to respond to Deepika’s gesture, Kangana didn’t burst into a typical outpouring of gratitude, but instead snarkily remarked: “I hope someday Deepika would tell me in person what she feels about my work. I would appreciate that a lot more.” Meow!

High and Dry in LA

It was a common producer friend in Mumbai who urged this popular desi rapper to look up an actress buddy of his while visiting Los Angeles recently. He promised the musician that she was someone who liked to have a good time, and would show him a good time too. The actress, who has been spending time in America lately, seeking out acting assignments, is believed to have happily offered to take the rapper out to a popular nightclub. But after a few drinks and a quick bite, she asked if they could call it a night at 9.30 pm. He reportedly tried to persuade her to go bar hopping with him, but she insisted she wasn’t a big drinker, and claimed it was nearing her bedtime!

Not keen to come off as someone who bullies a lady into staying out against her wishes, the singer—notorious for his provocative lyrics, by the way—escorted the actress to her car, kissed her goodnight on the cheek, and watched as she headed back home. The first call he promptly made was to their common producer friend in Mumbai, and complained that this actress who otherwise had a reputation for saying and doing scandalous things was the “most boring” person he’d met. And that he’d been left without company in a party town too early in the evening.