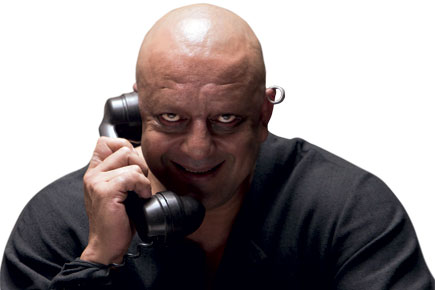 
Word on the street is that Shah Rukh Khan wants to turn his production company, Red Chillies Entertainment, into a full-blown Bollywood film studio, not unlike UTV, Dharma Productions or Yash Raj Films. The actor is reportedly tired of starring in movies for friends for a fraction of his fee.

Industry sources say SRK is currently shopping around for a CEO to take charge of the company, and has big plans lined up. He’s reportedly keen to produce as many as six to eight films each year, in several of which he won’t star himself.

The actor is believed to have told close associates that his focus for the next few years will be to expand his company and minimise “outside commitments”. The star isn’t thrilled that producers who pay him bargain basement fees have built their empires on the fat returns his films have generated.

First there were reports from the sets of Agneepath in Diu that the famously indisciplined Sanjay Dutt was putting up a surprisingly professional front. Assistant directors even claimed that Dutt (who rarely shows up for a shoot before 2 pm, no matter how much earlier his call-time may be) reported on set at 9 am each morning, and on some days, arrived for make-up even before the film’s hero, Hrithik Roshan, did.

Dutt turning over a new leaf was attributed to the fact that his close friend Ajay Devgn had advised the 50-plus star to pull up his socks if he didn’t want to get overshadowed in the movie by the much younger and more popular Hrithik.

Now it appears that Dutt has even agreed to actively participate in the film’s promotions. The actor, who usually hates interacting with the media—even while promoting films that he himself has produced—has reportedly agreed to travel across the country for media interactions, and will appear on reality shows to plug the film too, if needed. Dutt has been saying he’s going out of his way for Agneepath as a gesture to the film’s producer, Karan Johar, whose father Yash Johar he was deeply attached to. But insiders say Dutt doesn’t want a repeat of what happened during Mission Kashmir, where he got second-class status to Hrithik despite delivering a good performance.

She starred in as many as five films last year, only one of which made any money at the box-office. But she’s regarded as a competent actress who can be relied upon to carry off difficult roles.

Difficult, as it turns out, is a word that’s being used often to describe this leading lady, who Bollywood insiders say has been giving her designers a hard time lately. Allegedly, the actress has instructed the producers of her films not to give credit on screen to the costume designers who create her outfits. She’s believed to have said she does her own styling, and pretty much tells her designers what kind of costumes to make for her. Hence, she doesn’t think designers deserve credit for dressing and styling her. She’s told her designers that they ought to be happy with their pay-cheque from the producers, and shouldn’t expect anything more.

The designers, for their part, complain that the actress sees herself as something of a self-styled genius and while she does give inputs on her costumes, by no means can her involvement be described as ‘designing’ or ‘styling’. At least two designers have complained that the actress has an attitude problem, and have vowed never to work with her again. They also add that it’s unfair to be denied credit on screen, because designing for films doesn’t yield big pay-cheques anyway. And getting no credit for their work is like insult on injury.

One leading designer jokes that if the actress doesn’t mend her ways soon, she might just have to find out exactly how good a designer and stylist she actually is, because no respectable professional will work with her again.