Fashion without a design 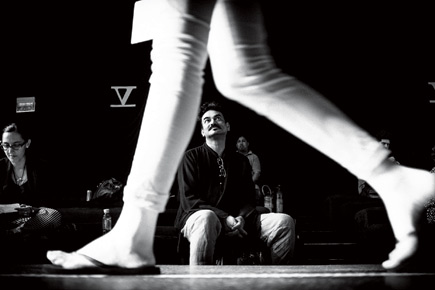 At a time when India is in flux over the ongoing Lok Sabha election, the world of fashion mirrors similar emotions of uncertainty. It is not about hemlines and a change of silhouette. Or what’s ‘trending’, as with opinion polls. There are other matters of concern. What, for example, does the future of fashion hold?

On the face of it, all is well with India’s fashion industry. It seems to be leading the way. Even the vibrant world of media, where propaganda makes waves and social media pips all others to the post, has taken a page out of fashion’s book. Everything has become a scrapbook of images. As with fashion magazines and blogs, no one reads the text anymore. It’s back to juvenile cartoons or medieval iconography. However, behind the industry’s veneer—all those glossy magazines, slick fashion shows, mushrooming fashion weeks and creative talent—lies a broad reality that affects advertising, finance and retail. It’s a reality that calls for a serious examination of what needs to change for this industry to prosper, that demands a plan put into action for a market of this size.

Did I say ‘size’? Let’s start with the sad truth that there is no Indian sizing standard for the fashion industry, even 14 years since the first Lakme India Fashion Week in 2000 (now Wills Lifestyle India Fashion Week for a decade). For a country that depended on tailors making custom-made clothes, to exporters dependent on countries they supplied to, there was no need of an Indian Sizing System. Things have changed dramatically since 2000. Small tailors and cloth markets have been ‘malled’ over by US-style department stores as the new altars of fashion retail. High fashion designers came up with their own sizing based on which foreign country they trained in, or which markets they exported their designs to. Hence, we are left with a jumble of US, UK, EU—and often just random— size labels in a country as large as a continent. One designer’s ‘small’ is another’s ‘medium’ is another’s ‘large’.

It’s the same with high-street retail. On the surface, this sounds trivial. It is not. It results in consumer frustration instead of quick sales. A wholesale ‘buyer’ buying garments from a designer to retail also buys the designer’s sizing. When these garments reach stores, customers are faced with racks of different designer sizes. In the process, they are left perplexed about their own size. Adding to the confusion, online fashion stores have no standardisation either, so e-shoppers are of different sizes on each site. One cannot blindly copy EU, UK, Far East or US sizes, since Indians have sizes and shapes that are different. Most Indian women have medium torsos and large hips. Most men have small shoulders and large waists. Go figure!

It’s about time the Fashion Design Council of India (FDCI) sets out an Indian Sizing Standard that the entire country can follow—from designer boutique to city mall, department store to village tailor.

A huge error-of-judgement in the history of modern Indian fashion has been the direct adoption of seasons from the West. There was a time, beginning in the late 19th and early 20th century, that Europe ruled fashion; after World War II, it was the US. But fashion is global. At the FDCI, we should have seen what happened in the markets of South America, Australia or South East Asia. During a European Winter, it is summer in the Southern Hemisphere.

When French designers realised they would lose emerging markets in the late 70s and early 80s, they introduced Cruise Collections for places like Mexico, Brazil and Australia. Aimed at warmer climes, these capsule collections of clothing were lightweight and included swimsuits, breezy tops, flatter shoes and comfy palazzos. Since the fashionable cities in most of these places were luxury places by the sea, the term ‘Cruise’ came to be replaced by ‘Resort’.

India today suffers the same dilemma Europe did. While the country’s north has a winter of sorts, south India stays hot and humid all year. Even in the north, when it gets cool, out come the pullovers and shawls. The concept of a parka or winter coat spilled over to Indian fashion from countries like Iran and Turkey and visuals in Western fashion magazines. Few Indians are ready to adopt a winter coat or parka for comfort. To add chaos to confusion, the Wills India Fashion Week follows an international Western calendar of Spring/ Summer and Autumn/Winter. So while Delhi has an Autumn/Winter show, LFW in Mumbai has Resort.

It is high time we implemented what I have been saying for a while now. We have three seasons, primarily. If we ignore the monsoon, since couture does not go with torrential downpours and mud splashes, we are left with Summer and Festive. In addition, a Wedding Season of bridal fashion could go with the latter. It may sound wonderfully highbrow to use words like ‘spring’ and ‘autumn’, but sorry folks, this is India! And it’s best if we realised we have possibly the best fashion market in the world.

What are most countries selling in the name of fashion today? Accessories. Walk into a Chanel store in Paris, London, Milan, New York, Tokyo, Hong Kong, Singapore, Dubai or Sydney. Clothes get the least space. What these designer shops reserve most space for are bags, shoes, sunglasses, cosmetics—in that order of importance. For clothes, increasingly, people in those markets go to supermarkets or superstores. Carrefour or Monoprix in France. Walmart or Sears in the US.

In contrast, clothes occupy centrestage in India while accessories stay on the fringe. Everywhere, from designer boutiques to multi-brand retail stores like Shoppers Stop or Globus, the spotlight is always on clothes. This is just how it should be in a country with a 4,000-year-plus legacy of apparel design.

Talking of a legacy, we need to preserve everything that has been bequeathed to us, whether it is the fine weaves or specialised dyes that have come down the generations. We need to protect all art forms that make up this vast industry. Indian weavers, for example, need special support in sustaining a tradition that the world cherishes as part of a global heritage.

It is vital that designers do not turn India into a Japan or China, where traditional clothes serve only ceremonial purposes. We must respect our heritage even as we incorporate international nuances of practicality and comfort if and when they are needed for the industry to evolve. It is disturbing, for example, to see saris redesigned to such an extent that thousands of years of artistic excellence are sidelined for modern glitter and bling. Such trends threaten the Paithani or Kanjeevaram sari.

As of now, the Government does not recognise fashion as an ‘industry’. This is despite the millions—from cotton growers to apparel retailers—who depend on it for their livelihood. All of India’s clothing and fashion organisations need to unite in demanding ‘industry’ status, which would make access to bank credit, among other things, easier. It’s our right!

Finally, if there’s another fight to be fought, it’s over entertainment tax. Yes, fashion shows are entertaining. And yes, they are often like fine-art performances. But there is a huge difference. Fashion Weeks, at least the WIFW and LFW, are in the business of fashion. The point is to sell clothes. These shows are needed to convey emotions, generate enthusiasm and make sales, not entertain audiences. So while it may be valid to slap entertainment tax on a fashion show that’s part of some other event—say, a car launch—it is ridiculous to club serious fashion weeks, trade fairs and student graduation shows with entertainers such as movies.

So, which party or leader is ready to step forth and champion the cause of fashion? Whoever does, gets this multi-million industry’s vote! n