It is Narendra Modi moment as one of democracy’s most popular leaders to play out the script of the India Ideal: the liberal state rising from the last wreckage of the socialist mind. Freedom is about daring—and he should know 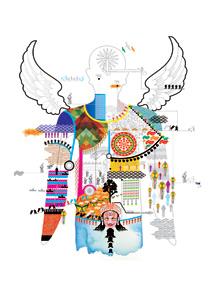 It is Narendra Modi moment as one of democracy’s most popular leaders to play out the script of the India Ideal: the liberal state rising from the last wreckage of the socialist mind. Freedom is about daring—and he should know

Commemorations are, invariably, history relived in kitsch. The celebrations, the rituals, the vows and what not—that is how the living pay homage to the past. The month of August is about journeys— in memory as well as in history. An assassination in Sarajevo one hundred years ago culminated in what we call the Great War. No war, even if matured in the national conscience, can be great. Europe is today in the throes of remembrance; and in India, our own contribution to the British Empire during the war is getting its commemorative due. The colony too sacrificed its men for the ‘Great’ cause. Europe had to wait for more than three decades to add further greatness to war. It will never end, and don’t we know? After the Second World War, freedom was painted in black and white; the bipolarity of the Cold War world made it easier for democrats and socialists to define the future of man in the straitjackets of good and evil. Another four decades, and another rite of freedom in the wake of the collapsed Soviet empire and the breached Berlin Wall, and as the British historian Timothy Garton Ash in the thrill of the Second Prague Spring and other eruptions of freedom across Eastern Europe called it in a euphoric neologism, ’89 was the ‘Refolution’ (revolution plus reform). To some extent, yes, it was. The nationalist in the Balkans would spoil the party; a scholar would rewrite his argument about ‘the end of history and the last man’; but still, it was a better time, till that plane flew over Manhattan one September morning in 2001. Wars of various sizes, but without the adjectives of historic ambitions, have been raging ever since. Freedom is a permanent argument.

On the 67th anniversary of India’s independence, such a backdrop provides a cautionary context to our celebrations. For whose freedom, we may ask, has America come back to drop bombs on Mesopotamia? For whose freedom did Putin’s Russia cross the border and annex a part of Ukraine? And it is freedom—or the conflicting definitions of it—that aggravates the bloodlust in the Middle East. Your freedom is someone else’s prison. Your struggle is someone else’s terror. What matters is the ideal. And what mattered, sixty- seven years ago, too, was the ideal. “At the dawn of history India started on her unending quest, and trackless centuries are filled with her striving and the grandeur of her successes, and her failures. Through good and ill fortune alike she has never lost sight of that quest or forgotten the ideals which gave her strength. We end today a period of ill fortune and India discovers herself again. The achievement we celebrate today is but a step, an opening of opportunity, to the greater triumphs achievements that await us. Are we brave enough and wise enough to grasp this opportunity and accept the challenge of the future?” That was Nehru with the grand sweep of poetic flourish, addressing the Constituent Assembly at the midnight of freedom. If it was not the ideal, what was it? And the pledge the members took is still worth quoting: “At this solemn moment, when the people of India, through suffering and sacrifice, have secured freedom, I, a member of the Constituent Assembly of India, do dedicate myself in all humility to the service of India and her people to the end that this ancient land attain her rightful place in the world and make her full and willing contribution to the promotion of world peace and the welfare of mankind.”

Those words were not repeated as India evolved as a democracy. Those were not words of patriotic pulp. Can you imagine an Indian MP or a minister taking oath today invoking “world peace and the welfare of mankind”? Considering the big bad world we are in, such invocations are all the more relevant now. And such words are absent because the politician we are familiar with is a man of shrunken mind— someone whose idea of India is as small as his constituency. It was once said that the grandeur of leadership ended with the Second World War, though the trio of Reagan, Thatcher and Gorbachev was there to star in the action thriller of history. Today, in places such as Washington, London and Paris, the leader in power would say that he can no longer afford the luxury of big ideas, that statecraft is all about pragmatism, not idealism. But there were leaders who struck a balance between idealism and action. In 1947, Nehru was all about the ideal of freedom—and the India on his mind was very much an integral part of the post-War world. Peace was not a rhetorical cliché then. That said, the Nehruvian India, as it began to unfold, was a project in misplaced idealism.

The Nehruvian New Man was, in retrospect, a more affordable version of the Socialist New Man. Both were fantasies; in the case of the latter, it was a fantasy sustained by the jackboot. For Nehru, an idyllic India of secularism and scientific temperament was an imagined rejoinder to an India of religious divisions and superstitions. The nation that Nehru wanted to build had a socialist core, and for the liberated Third World, it was after all the age of Soviet chic. The funny thing was that empires built on the lies of ideology would fall, new struggles of freedom—scriptural, economic—would erupt across the world, but India would remain immune to history. Today, India is where it is as one of the world’s enduring examples of democracy and a marketplace of untapped freedom not because of its politicians, but in spite of them. It is a tribute to the spirit of the Indian who dared to dream—and realised the uses of adversity.

What was needed was not a repudiation of politics but politics-not-as-usual. The old ideological straitjackets are inadequate to deal with a world where the possibilities of freedom are immense even in closed societies—blame it on technology. It is the age of digital samizdat. In India, there are still instances of extra-constitutional temptations of elected politicians—and illiberal instincts of the state. The onus, in the end, is on the state. As John Micklethwait, editor-in- chief of The Economist, and Adrian Wooldridge, the magazine’s management editor, argue in their new book, The Fourth Revolution, it is ideas of governance that determine the success of governments today. The fourth revolution (after the nation state, the liberal state and the welfare state) is about ‘reviving the spirit of liberty by putting more emphasis on individual rights and less on social rights. And it is about reviving the spirit of democracy by lightening the burden of the state. If the state promises too much, it creates distemper and dependency among its citizens; it is only by reducing what it promises that democracy will be able to express its best instincts, of flexibility, innovation and problem solving. This is a fight that matters enormously. Democracy is the best safeguard for basic rights and basic liberties. It is also the best guarantee of innovation and problem solving. But fighting against its worst instincts will be tough.’

Their argument is set in a Western context, but in the world’s most volatile democracy—and till recently one of the most misgoverned states—it is very relevant. Three months ago, India gave its unconditional mandate to a politician who promised good governance—and pledged to redeem the state. By the time you read this, you will have heard his first speech as Prime Minister from the Red Fort. It is his moment as one of democracy’s most popular leaders to play out the script of the India Ideal: the liberal state rising from the last wreckage of the socialist mind. Freedom is about daring—and he should know.