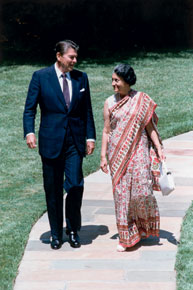 It’s a happy augury for Barack Obama’s visit that the Light Combat Aircraft (LCA) that first appeared on the drawing board in 1981 was finally handed over to the Indian Air Force on 17 January. It has taken the LCA, hailed in a forgotten past as the epochal prototype of a range of joint ventures between India and the United States of America, 34 years to crawl to the skies and still it can’t spread its wings fully. It was clear even in 2002 when I published Waiting for America: India and the US in the New Millennium, that the multi-role fighter was symptomatic of stagnant Indo-US relations.

The LCA reflected Indira Gandhi’s determination in her second coming to replace the IAF’s ageing Russian MiG-21s and distance India from the Soviet Union. The US enthusiastically endorsed the Defence Research and Development Organisation’s original blueprint for a $20 million fighter. But the ambitious plan was a victim of the political mistrust, bureaucratic infighting and sheer inertia that characterised bilateral ties. Costs had spiralled by the time of the first flight in 2001 when Atal Bihari Vajpayee christened the aircraft Tejas, ‘radiance’ in Sanskrit. No one remembered, when Defence Minister Manohar Parrikar handed over the Tejas to Air Chief Marshal Arup Raha in what seems to have been a strangely secretive ceremony, how diligently Indira Gandhi had courted Ronald Reagan to mark a new era of Indo-US strategic cooperation.

Reagan liked to say he had “slept a few moments in India”. That was when his plane from Taipei to “London, England” made a late-night refuelling halt in New Delhi. Dwight D Eisenhower, Richard Nixon and Jimmy Carter had visited India before then. Bill Clinton and George W Bush did so afterwards. Obama was the sixth American president to come here in 2010. Thanks to Narendra Modi’s imaginative initiative, he will be the first to grace the Republic Day platform on 26 January.

As with all such memorable events, there’s a danger of excitement running away with sense. I hope the mad scramble by MPs to pump presidential flesh when Clinton came calling will not again be repeated. Nor will any legislator vow, like Bihar’s Shyam Sinha, not to wash for three months the hand the US president had shaken. As Indian politicians jumped on chairs, scrambled over each other and pushed and shoved, it seemed as if they would lustily have voted to sign even the hated Non-Proliferation Treaty. A moment later, they would as vehemently have denounced the ‘foreign hand’ and all its works. A measure of honest reserve would serve India’s interests better and win Obama’s respect.

When Singapore’s prime minister, Goh Chok Tong, was invited as the chief guest for the 1994 Republic Day, the local newspaper, The Straits Times, warned against expecting too much from the occasion. Describing the tumultuous triumph ancient Rome organised for victorious heroes, the paper wrote that amidst thunderous applause, crashing salutes, blaring music and floral showers, the grizzled old man who held a laurel wreath above the hero’s head murmured incessantly in his ear, “Remember you are only a man!”

An awareness of mortality was expected to prevent illusions of divinity. In the case of Modi and Obama, the restriction comes from the very different perceptions and compulsions—despite huge areas of common interest—that guide India and the US even as they seek closer alliance. To adapt Shaw’s claim that England and America are two countries separated by a common language, India and America are two countries separated by a common democracy. Whatever the leadership might aspire to, the nature of the partnership must accommodate the genius of the Indian people. The people were not a factor in US ties with other Asian allies such as Shah’s Iran or Yahya Khan’s Pakistan.

Any response was bound to seem insipid after Bush’s fervent honeymoon with Manmohan Singh. But Obama tried bravely to dispel fears when he came in 2010. As The New York Times reported from New Delhi, ‘three decades and two oceans’ stood between guest and host. But, sitting on a dais, ‘the two men, neither known for their social ebullience, were inseparable: the youthful, lanky American president’s arm firmly fixed on the older man’s shoulder, Mr. Singh grinning widely with his arm wrapped tightly around Mr. Obama’s waist’. Obama called Singh his ‘guru’ and described Indo-US relations as “the defining partnership of the 21st century”. Singh returned the compliment by saying Obama was “a personal friend and a charismatic leader who has made a deep imprint on world affairs”.

Modi, too, touched a new chord during last year’s visit to the US. That he went at all and, even more, the graciousness with which he reciprocated American gestures demonstrated a remarkable ability to subordinate memories of personal chagrin to the national interest. If his invitation to Obama marks one high-water mark, their joint editorial-page article in The Washington Post had already marked another. ‘The exploration of space will continue to fire our imaginations and challenge us to raise our ambitions,’ the article declared. ‘The promise of a better tomorrow is not solely for Indians and Americans: It also beckons us to move forward together for a better world. This is the central premise of our defining partnership for the 21st century. Forward together we go—chalein saath saath.’

Ever the realist, Modi tempered the platitudes that thickened the atmosphere like cloyingly sweet kheer. His conversation with Obama had reinforced the conviction, he said, that India and the US were “natural global partners” because of their “shared values, interests, and strengths in the digital age.” That wasn’t quite the same as the ‘natural allies’ that Lieutenant-General Sunit Francis Rodrigues coined during Operation Desert Storm. Vajpayee picked up the phrase that through wanton overuse now falls with the leaden thud of a cliché.

It would be another cliché to repeat that India and the US are poised on the threshold of a new strategic partnership. But the need for cooperation is even greater than it was at the freezing height of the Cold War. Secretary of State John Kerry’s speech at the recent Vibrant Gujarat investment summit in Ahmedabad reiterated the truth that India cannot achieve the economic revolution of the 21st century without American participation. India needs capital and technical expertise. Washington’s warnings to Islamabad on the eve of the visit acknowledged that America’s influence alone can restrain Pakistan and ensure the Subcontinent’s security and stability by severely discouraging all forms of Islamist adventurism.

The renewed 2005 New Framework on Defence expands the scope of cooperation with the declaration that the two states will ‘treat each other at the same level as their closest partners’ on issues including ‘defence technology transfers, trade, research, co-production, and co-development’. Thereby hangs a tale. When India first sought such treatment immediately after Independence, emissaries like Sir Girja Shankar Bajpai were brusquely rebuffed. Worse, the US State Department noted smugly how cleverly it had solved ‘the problem’ (of Indian importuning) by classifying India ‘upwards to the category of countries receiving ‘restricted’ US military information’, and making ‘a deliberate effort to furnish the Indian military attaché (in Washington) with relatively harmless but somewhat impressive military information …’ Now, the US needs the support of a vibrant democracy commanding the heart of the ocean that bears its name for the consensus that will give its manifest destiny an Asian dimension. But despite the importance of the Asia-Pacific region—or perhaps because of it—New Delhi will have to think carefully about American expectations of more active participation in the South China Sea, in peace missions in Iraq and Syria, and in addressing the challenge of the fundamentalist ‘Islamic State of Iraq and Syria’. Even Chandra Shekhar who revolutionised military cooperation with the US, balked at sending troops to Kuwait. “We can’t even defend our own borders” he pleaded. “How can we defend other countries?”

Obama’s China policy is naturally tailored to US needs, not Indian. As Robert S Ross of Harvard’s John King Fairbank Center for Chinese Studies argues, the ‘pivot’ toward China is creating a self-fulfilling prophecy. He fears that US policy ‘unnecessarily compounds Beijing’s insecurities and will only feed China’s aggressiveness, undermine regional stability, and decrease the possibility of cooperation between Beijing and Washington’. Obama, Ross says, is inflating the threat posed by Chinese power when it should really be recognising China’s inherent weaknesses and America’s own strengths. ‘The right China policies would assuage, not exploit, Beijing’s anxieties, while protecting US interests in the region.’

India need not share this pacifist argument. But in considering US imperatives, India cannot forget that China is its largest trading partner if services are excluded. India and China share a long and disputed border. China is Pakistan’s ‘all-weather’ friend, supplying much of the sophisticated weaponry and missile and nuclear technology that makes Pakistan so dangerous. Nor can China’s past involvement in some of the Northeast’s armed rebellions, its subversive role among India’s smaller neighbours, and activities in the surrounding seas be overlooked. All this calls for a sophisticated multi-pronged response rather than outright confrontation.

No two countries can ever share identical interests. The US is a South Asian player to secure its own geopolitical ends. As the Lone Superpower, it must enforce its authority against challengers, real or potential. India cannot be only America’s licensed gatekeeper in the Orient. Nor can India be just another piece in a new version of the Great Game. H-1B visas, trade quotas, solar power, nuclear energy, dumping charges … there are bound to be many sticking points. It’s idle to talk of ‘de-hyphenating’ India and Pakistan in American policy because any US initiative in one country automatically resonates in the other. But there is also the prospect of substantial gain if India can streamline its labour laws, rationalise land acquisition and develop its infrastructure. The real challenge lies at home. For India groaning under the weight of poverty, the first priority has to be the people’s agenda. For that India needs peace more than power.

To end on a note of caution, the Tejas saga is not yet over. Although released to the IAF, the fighter won’t get final operational clearance until all weaponry and systems have been tested and it is fully ready for battle. The FOC is expected by the end of the year. The Americans aren’t involved any longer, but one hopes this glacial pace will not give them cause to rethink cooperation with India.