Done in by the Vote 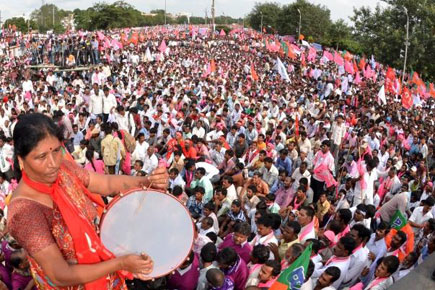 
The announcement of the formation of Telangana, soon after the ordinance on the Food Bill, is on expected lines. The Congress’ strategy for the 2014 polls is unfolding exactly as anticipated, and the Land Acquisition Bill should be next in line. Together, the Food and Land Acquisition bills are a direct appeal to a large segment of the voting population, while Telangana is aimed at arresting the decline in the Congress’ seats in Andhra Pradesh, which were key to the formation of both UPA I and UPA II.

The use of these last minute legislative and political initiatives as a means of winning an election has led many to express the fear that Indian democracy is now just about contesting and winning elections. These initiatives reinforce a pattern already evident in the run up to Assembly elections in most states. But it is not just the last year of the UPA II that should be seen as a paradigm for future elections; the entire five years of UPA II, including the four years of corrupt governance, are a depressing template for how future governments are likely to conduct the business of contesting and winning elections.

The Indian Parliamentary election dwarfs any other electoral exercise in the world. Dozens of political parties vie for 543 seats, and in most electoral constituencies there are at least three serious candidates in the fray. In 2009, the total number of voters for these 543 seats stood at 723 million and an estimate by the Centre for Media Studies placed the expenditure on the polls at Rs 10,000 crore, of which Rs 2,000 crore was the amount to be spent by the Election Commission as well as state and central governments. This implies that Rs 8,000 crore was estimated to be spent by the various political parties and candidates. Another estimate by Janmejaya K Sinha in The Economic Times, relying on spending in the US elections, arrived at a much higher figure of Rs 30,000 crore for Lok Sabha elections. More importantly, his calculations suggest that Assembly polls over a five year period end up costing about the same as a Lok Sabha election. Even if we go with the lower—and very conservative—figure, we arrive at an election expenditure of Rs 16,000 crore by political parties for Lok Sabha and Assembly elections.

Against this, consider this study by the Association of Democratic Reforms (ADR) which shows that between 2004 and 2011, 23 political parties, including the Congress and BJP, collected Rs 4,662 crore through donations, which suggests that they would have earned less than Rs 3,500 crore between 2004 and 2009. This leaves an enormous shortfall of over Rs 12,500 crore between the expenditure and income of political parties for the 2009 election, and given that election expenditure doubled from 2004 to 2009 this figure should easily exceed Rs 20,000 crore in 2014.

Every estimate here is far more conservative than it should be, yet this calculation shows that political parties needed to have earned this amount between 2009 and 2014 through non-transparent, or to put it more bluntly, corrupt means to fund the shortfall in election expenditure. A large amount of this money can only be collected through preferential treatment in the award of large government contracts. Given that a political party is only one beneficiary in a chain that includes individual ministers and a host of officials in the bureaucratic hierarchy, it is difficult to imagine a corporation contributing more than one to five per cent of the total value of the contract to a political party. This would suggest that at the very minimum Rs 400,000 crore worth of government contracts at the state and central level are directly influenced by the need to fund elections. And this is most certainly an extreme underestimate.

While the public response has been of justified anger against the UPA II, this largely ignores the structural problems driving corporate corruption in India. Though election spending in India is huge in absolute terms, spending per voter is still very low in comparison with the developed world. This suggests the problem is only likely to worsen. Given that attempts to curb or monitor election spending have been largely futile, suggestions related to state funding of elections really do not seem to hold out hope. Those who can spend above and beyond the limit imposed by state funding will still tend to do better electorally.

Depressing though the conclusion may be, it could well be that UPA II has charted a roadmap for the evolution of our democracy—three or four years of corrupt governance followed by a slew of announcements whose appeal lies less in their efficacy and more in their ability to directly influence voters. Perhaps, the conclusion may not be inevitable, but our problem is that we are not even debating this very real possibility with any degree of seriousness.