A book on the painted posters and hoardings that lured Indian masses into cinema theatres reminds Kiran Nagarkar how essential they were to the spread of the gospel of Bollywood. 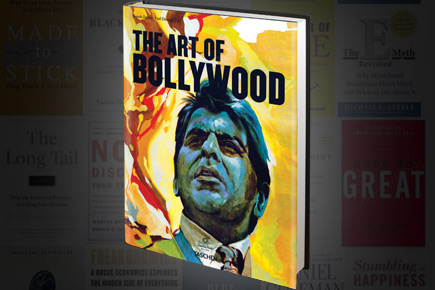 A book on the painted posters and hoardings that lured Indian masses into cinema theatres reminds Kiran Nagarkar how essential they were to the spread of the gospel of Bollywood.

When I was eight, I was sent to live with my aunt in Secunderabad since the climate in Bombay didn’t suit me. Her late husband had been the manager of two cinema theatres, the Odeon and Dreamland, and she had become an inveterate Hindi film buff. During the first week of my stay, she took me to see a weepy called Dillagi, which demanded a kerchief the size of a bedsheet. I was bored out of my skull and forced my aunt to take me to the toilet nine times. She was a slow learner, and the next time she took me to another drippy movie, I broke all previous records for infantile prostate problems and went to the toilet 11 times. When we got back home that night, she cut my thingumabob off and sent me back to Bombay. But the damage was done. I became an incurable film fiend.

The only time I stole from my mother was when I was nine and in St Vincent’s School in Pune. It was an eight anna coin. No beggar today would dream of accepting anything below four times the amount, but it was a huge sum for a schoolboy who was in the fourth grade. The money went towards buying A4 size Hollywood posters for my collection. They were just two-colour jobs, but there was Brandon De Wilde screaming Shane to Alan Ladd. Or Jane Russell looking ravishing in Robert Mitchum’s arms, the puffed sleeves of her blouse pulled down to reveal the luscious curves of her breasts in Joseph von Sternberg’s classic film noir Macao. I have no idea what happened to the collection after I came back home to Bombay. In retrospect, I must confess that I did not understand the import of the absolutely marvellous caption for Russell’s film poster of Hot Blood, ‘Jane Russell shakes her tambourines and drives Cornel Wilde!’

Much later, when I began a career in advertising and had to travel to Hyderabad and other cities, I once again started collecting posters. But with one major difference: I had moved to Indian films, in Hindi, Tamil, Telugu, Kannada and Malayalam. The posters were really big and in colour. It was a random collection, I took what I got. There was no dirth of posters of high-voltage emotional dramas and social themes in garish colour, but the most engaging were the bizarre ones with unforgettable titles like Madam Zorro, Rocket Tarzan, not to mention Rocket Girl and Hercules Meets King Kong.

It had not occurred to me that one day, these posters could fetch thousands of rupees. I had a tiny apartment and had to perforce store them in the loft above my bathroom. I displayed one poster per month on the soft board I kept for such purposes in the living room. One day, I climbed up a chair to replace an old poster and found that the loft had flooded with water from the bathroom above and my one and only chance of becoming a future millionaire had turned to paper puree.

All ye devotees and followers of Shah Rukh Khan, if you think the book The Art of Bollywood is about your hero and Bollywood dancing, you are going to be sorely disappointed. On the other hand, if you think Bollywood is central to an understanding of India and the Indian psyche, then this coffee table book about how the Hindi film industry communicated with its viewers outside the theatre on the streets and thoroughfares of the Subcontinent since the 1930s, and in the process formulated a distinct image for itself, will be essential reading for you.

And here’s the best part. While the text itself is a mine of well-researched information about a subject that was mostly neglected until now, the  authors, Rajesh Devraj with Edo Bouman in collaboration with the National Film Archive of India, have done an exceptional job and unearthed long-lost posters and hoardings, booklets and other publicity material. As a result, the book gives the reader a remarkably evocative and delightful walk down memory lane. There’s Chandralekha here, the first Hindi spectacular movie produced not in Bombay, but by Gemini Studio in Madras. You will get to see the posters of RK Studios, where producer-director-actor Raj Kapoor made his silver and golden jubilee films. Or the work of Navketan Studios, which made most of the Dev Anand hits and is still functional today.

The book will appeal not merely to scholars and theoreticians of cinema and Hindi film aficionados, but to a much larger international audience which is interested in the question ‘How do you communicate the moving image through a static one?’ The first thing that hits a foreign visitor as he gets out of an Indian airport is the plethora of film posters and monumentally large film hoardings vying to grab his attention. Film heroines rush out at him from a valley of flowers; a skimpily-dressed vamp attempts to seduce a hero in a nightclub; superstars serenade their paramours in the snow-clad mountains of Switzerland; Amitabh Bachchan with shirt-ends tied in a knot takes on seven hoods.

Since India is the largest producer of films in the world, the competition is fierce. The job of the hoarding is nothing as subtle as getting your curiosity excited; it’s to get you and your family to shell out the cash and fill the theatre. If it were permitted, we would have multi-storeyed hoardings reaching right into the sky. Frankly, it’s not as far-fetched as it sounds. Go down south to Chennai or Hyderabad, and you’ll find 60 and 70  feet cut-outs of film stars grazing the sky.

The painted poster and hoarding is fast dying out, at least in the metros, but it defined the celluloid image and captured the imagination of the populace for over 70 years in a way that it could not in any other country. The hold of the moving image on Indians of every hue is truly unique. It unites us and binds us as no other medium does. Now for the very first time, the painters and artists who were responsible for spreading the gospel of Bollywood cinema get their due, and their work is studied in some depth. We owe a big thank you to Taschen and Devraj for conceiving and seeing this worthy project through.

It’s worth remembering that those were not merely pioneering, but innocent times. As with Hollywood, there was no over-arching vision at the start about the process of communication in Bollywood either. The producers and film companies improvised ways and methods as they went along. If you see  early Hollywood posters, like the one for They Met in Bombay starring Clark Gable and Rosalind Russell, you will find that they, too, used illustrations converted from photos in their posters. Bollywood commissioned a wide range of artists and studios to paint and assemble posters and hoardings from photographs.

A few artists (and they were artists with a finely-honed painterly sensibility) worked mostly on their own and even signed their posters and hoardings. The work of an artist like DR Bhosle deserves to be studied far more closely. His design sense is exceptional and his posters for Bheegi Raat, Yeh Rastey Hain Pyar Ke and Kala Bazaar are genuine classics. One of the artists who’s supposed to have worked at tremendous speed was Mulgaonkar. It is said that Mulgaonkar was an apprentice with Bhosle, but their styles are different. I remember Mulgaonkar from my own childhood since he was perhaps the most popular artist in the field of magazine covers in my mother tongue, Marathi. How could anyone forget his lush women, often standing in streams and runnels with water flowing against gravity and turning their blouses transparently wet, and his unisex children?

Most of the painters worked in groups or combines. Once in a while, though very rarely, you come across an advertising company which acts as the nodal agency for commissioning the work. The principle of the assembly line was very much in evidence. Some painters were experts at painting hands; others were good at limbs, some did diadems and torsos and still others worked on the faces. Some were good at impressionistic depictions of ‘fight’ sequences. By and large, the draughtsmanship, especially of the face, was truly accomplished. This is all the more noteworthy given the fact that much poster art was done by people who had rarely received professional training. They worked in extraordinarily cramped spaces under tremendous pressure and haste, and were paid a pittance for their labour.

The major difference between Hollywood and Bollywood posters is the palette. The garish colours often turn Bollywood poster art into kitsch. There are doubtless many theories about how this colour scheme came to be. Perhaps it might be more fruitful to look at the colours used on the serried ranks of gods and goddesses seated on the steep shikharas (towers) of temples in the south. Calendar and regional magazine cover art and in the glossy posters of gods and goddesses for sale on Indian pavements owes a lot to this colour scheme, and it stands to reason that painters of film hoardings too took their inspiration from South Indian temples.

But The Art of Bollywood is also a history of the changing preoccupations of the country since cinema came to India in 1913. The Indian freedom struggle and post-independence India, the different international art movements, fashions not merely in clothes but make-up and eyebows and bust-lines, women’s emancipation and education, cricket, family planning, they are all reflected in Indian cinema as well as the publicity material. In short, the posters are a visual repository of popular culture. Oddly enough, there is room for unexpected humour too. The film Milap starring Nalini and Nasir has a caption that says, ‘A wonder theme of thunder and rain of pleasure and pain’. The poster for Mahageeth, translated into English as Eternal Music, has a cubist treatment of what initially looks like the steering wheel of a car in the left-hand corner, but is more likely to be a revolutionary electrical invention since the main actor Surendra’s forehead is shown impeccably bandaged and he’s being fed in bed by the female lead. What catches one’s eye though is a scene at the top left-hand corner: a brave and unflinching Surendra appears to be threatened by two villainous characters, while above to the right, Surendra’s name is accompanied by his educational qualification, BA LlB. Perhaps he insisted that his wife call him Surendra BA LlB and the children, Papa BA LlB.

Go ahead, sit with this book on a lazy Sunday afternoon, dip into the text, and feast your eyes on the kitsch and art of this lost art-form.