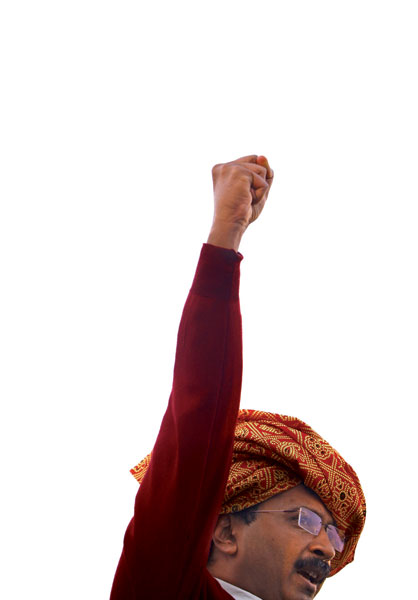 Imagine this. Seated on the throne (not figuratively but literally) is the king who was the commoner, one of them, the multitude without a voice but restless with latent anger, and that sense of being born in a country without justice. Today, he is where he is because he has harvested the resentment of a city, accelerated the hope of the hopeless, and promised them an Edenic alternative to the wretched reality of politics as usual, a place where power will flow from below, where every man will be the government, the arbiter of his destiny, and where, the Republic of Happiness, a few wise men—and he is the wisest of them all—will show the way to bliss. The man on the throne also realises that the romance of the winter revolution is behind him, that summer is a cruel season, of treason and blood, of trial and consolidation, of looking within and being inspired by your own greatness, and, of course, it is a moment to accept the truth that power is permanent vigil, that the enemy lurks in the shadows, that evil is the other—the one who puts his words against his Word.

The reality, though, is not as predictable as another passage from Revolution’s Day After. The happenings in the Delhi Durbar exude the dramatic tension of a comic strip. And Arvind Kejriwal, the crowned common man steeped in his own righteousness, today resembles the parody of a potentate from Pyongyang, his simulated supremacy incompatible with the black-and-white inanities he parades as the thoughts of the Great Leader. The thoughts were originally codified in the little book of the truth fighter: Swaraj (and I owe my copy to the generosity of Yogendra Yadav). In this slim volume of diffused simplicities, Gandhi is marinated in Marx for the easy consumption of the converted. In his first term as Chief Minister, swaraj was street theatre. (With due apologies to Milan Kundera, it must be said that kitsch is the aesthetic ideal of not just totalitarianism but of the me-alone-ism of the activist-ruler as well.) In retrospect, swaraj-in-action was not a show under- appreciated. Being Delhiites, they were in a vantage position to see the vulgarity of power at play. So Kejriwal, born out of the urgency of an alternative, the third way, was necessary— and he was worthy of forgiveness. He was worthy of being indulged. Intellectuals like Yogendra Yadav from the left side of the argument continued to tell us why.

We missed something all along: the planetary system of Kejriwal is built on an exaggerated idea of Kejriwal himself. Even comic strip revolutionaries follow the script of the originals: absolute power abhors questions. They listen to the echo of their own answers—the linear, monochromatic certainties of the wisest. In this cosy echo chamber, the enemy is the one whose conscience is not fully subordinated to the leader (read this week’s cover story by PR Ramesh and Ullekh NP). For Yogendra Yadav and other thinking men of AAP, it took a while to discover the validity of questions—and the totalitarian temptations of Kejriwal. Even as we sympathise with purged intellectuals like Yadav and Prashant Bhushan, let’s not sidestep the truth: they only question his style, not the substance. They only disown the cult of Kejriwal, the leader who tolerates no dissent; their problem is with the messenger, not the message, which, by the way, is legitimised to a great extent by their intellectual input. They didn’t realise that even the pastiche potentate wanted only hymns-to-the-helmsman poets in his court.

So, will AAP’s dissidents go beyond the obvious— the cult of Kejriwal? Obvious because the dangerous simplicity of Kejriwal’s idea of India—an idyllic maha-Panchayat where the Knowing One will ensure equal distribution of happiness—could have only been sustained by a mind that did not comprehend the complexities of ideas. The mind of Kejriwal, as revealed in his book—more aptly a pamphlet —and interviews, encapsulates India in a few soothing banalities. This mind is an amalgam of a superficial Gandhian, an apprentice anarchist, an aspiring libertarian, and an undergraduate Marxist—and the philosophers in the family have only added a veneer of respectability to this malign malarkey. Constructed with raw material collected from the second-hand bookshops of isms-for- dummies, his India is an argument against modernity. The purged intellectuals have not given us a counter-argument yet. They only want a Kejriwal who behaves.

That said, a Yogendra Yadav on his side made Kejriwal, in spite of his self portrait as the enlightened one, look a bit more bearable. Now he is where he belongs: in a make- believe, listening only to his inner, irrational voice, and in the soothing company of the so-called subaltern adventurers who fantasise that history is at their disposal. Arvind Kejriwal in power is the triumph of blind faith. There is no exhilaration in the inevitability of unravelling. There is only comic-strip frisson.