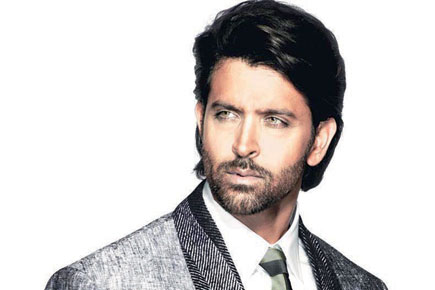 
When Hrithik Roshan was admitted to Hinduja Hospital in Mumbai for surgery to remove a brain clot last weekend, his family reportedly wrestled with the decision to confirm the news to his fans and the media. Tabloids had already got wind of the fact that the actor was unwell; an outdoor shooting schedule of Bang Bang was cancelled literally hours before the unit was meant to take off. And before Chinese whispers could lead to panic, the actor and his folks decided it was only fair to reassure his fans that he was going to be alright.

Just hours before going into surgery on Sunday, Hrithik posted a cheery message on his Facebook fan page: ‘Minor brain surgery to remove blood clot (chronic subdural haematoma). Should be rock n rolling by evening! U guys have a great day too! Supersonic!!’ Later the same evening, his father, filmmaker Rakesh Roshan, and his doctor addressed newspersons outside the hospital and confirmed that the surgery had been performed successfully.

In these times when film stars have become particularly cagey about revealing or confirming sensitive personal information, the industry is lauding the Roshans for their decision to share rather than hide and as a result eliminate any scope for exaggeration or an invasion of their privacy by pesky journos. The blood clot, likely to have been caused by a diving scene that the actor performed repeatedly from a 30-feet height into Thai waters while filming Bang Bang some weeks ago, has been cured, the hospital has revealed. Hrithik has been advised rest for four weeks, after which he can jump right back to the film.

Katrina Kaif, who flew off with boyfriend Ranbir Kapoor for a holiday to Spain after the release of his Yeh Jawaani Hai Deewani, may now have a little extra time on her hands.

The cancellation of a recent schedule of Bang Bang because of Hrithik’s emergency surgery has left the actress with a hole the size of two weeks on her calendar. Too bad Ranbir must report to Sri Lanka to begin shooting Anurag Kashyap’s Bombay Velvet, or they might have extended their holiday. Now it is learnt that Katrina will take off for London to spend time with her mum and siblings, and to usher in her birthday on 16 July.

Meanwhile, there’s uncertainty among industry insiders whether Dhoom 3, in which she stars opposite Aamir Khan, will make it in time for a December release as initially expected. Yash Raj Films has confirmed that a release date for the action film hasn’t been locked yet.

The actress, who doesn’t have a single film on the horizon after Dhoom 3 and Bang Bang, remains Dostana director Tarun Mansukhani’s first choice for that film’s sequel opposite John Abraham and Abhishek Bachchan, but the film doesn’t have a start date yet, and Mansukhani has confirmed that he doesn’t have a leading lady signed on either.

With everyone from Karan Johar, Imtiaz Ali, Anurag Basu and Zoya Akhtar currently in the process of casting their latest films (at least three of those filmmakers slated to be working with Ranbir), it is likely Katrina will be busy again shortly, but the actress doesn’t seem the least bit perturbed that she’s got a blank diary right now.

A disgruntled beauty salon employee has been telling friends that she will never again make a house call to this A-list Bollywood actress who gave her a hard time recently. According to her story, the salon received a call from the actress’ manager asking for someone to be sent over to the star’s Bandra home to give her a bikini wax.

The young lady has said the actress was in a grumpy mood and barely communicated with her while she was at her home and throughout the waxing. “She wasn’t shy, she was just rude,” she has said of the star’s manners, or lack thereof. Midway through the exercise, the actress received a phone call, presumably from her superstar boyfriend whom she affectionately referred to as “Baby” during the conversation.

The lady added that the actress’ home is ‘modest’ at best, and hardly befits a celebrity of her prominence. But what she has grumbled about most is the fact that she received no tip at all from the actress. The payment for the bikini wax was simply added on to the star’s tab at the salon, so no cash was exchanged. And after waiting around “foolishly” for a few minutes, hoping to be rewarded with a generous tip, the lady reveals she was shocked to realise that none was forthcoming.