An Idiot’s Guide to Celeb Tweeting

Now that the perils of embracing cool tech are clear, perhaps our twitterati will consider learning the golden rules of celebrity-tweeting. 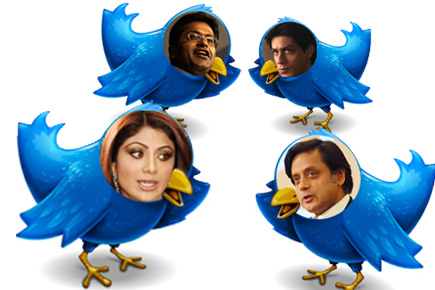 Now that the perils of embracing cool tech are clear, perhaps our twitterati will consider learning the golden rules of celebrity-tweeting.


Now that the perils of embracing cool tech are clear, perhaps our twitterati will consider learning the golden rules of celebrity-tweeting.

The IPL brouhaha has all the ingredients of high-grade media crack: sex, money, celebrity, power, and Twitter! Old-style desi corruption served in a sparkly new techno-bottle. Haiku technology has been crowned the mighty giant-killer, toppling both rivals in one fell tweet. “Tharoor, the parliamentarian, adopted new-age tools to portray the image of a dynamic leader (read: habitual user of Twitter), something the political fraternity correctly read as brash,” harrumphed PR analyst Sanjiv Kataria. “Tweeting, Not IT Raids, Behind Modi’s Ouster,” declared another headline. Who cares about “sweat equity” or rigged IPL auctions in the light of such flagrant misuse of technology. The true moral of this story: There’s a very good reason why Machiavelli didn’t own an iPhone.

Now that the perils of embracing cool tech trends are clear, perhaps our famous twitterati ought to consider learning the three golden rules of celebrity-tweeting. They are simple indeed, but will require a level of self-awareness that may prove challenging. Nevertheless, you, most vainglorious VVIP, must persist.

Never buy into your own hype. Save that pablum about communing with the people for those silly enough to believe it, i.e. your fans. Embrace that outsized ego and accept that you just want attention; lots and lots of it, but the right kind. This is best ensured by outsourcing your Twitter account to a lowly PR professional. Why? As a mere mortal (sad but true), you will inevitably think a very stupid thought in perilous proximity to some overpriced gadget—an event made more hazardous and likely given your fame and very poor judgment (see: outsized ego). We pathetic plebs can be recklessly dumb in obscurity, but you, god incarnate, are just one silly tweet away from making headline news. So stop typing and call for the nearest flunky now!

Your Handle Is Your Brand

Twitter allows you to dip into crowd-wisdom; stay in the discursive loop; surf the information tsunami of our times. Such are the modest delights reserved for dull people who prefer to follow than to tweet; to trade knowledge than opine. What evs, baby, coz this is so-o-o not you. As our fallen angel Shashi put it so well to the New York Times, “Sharing my thoughts, and details of my work, my life and preoccupations, is partly an effort to show the public that their leaders are people they can relate to.” In other words, it’s really all about me, me, me, me.

Yes, narcissism is indeed every celebrity’s divine right, but it must alas take a back-seat to prudent brand management (Your many offshore bank accounts insist on it). In other words, @TheShilpaShetty, try not to natter on so: “Gmorn tweets,ommyway into town for the press conf of the new tv show ZNKD..traffic traffic grrrr..thot 4 2day “Clear ure mind of CAN’T” Not unless you plan to be the brand ambassador for the illiteracy crisis in India.

Now here’s the really good news. Thanks to this nifty piece of technology, you, dear celebrity, are finally driving that 24X7 news wagon. Imagine conducting a press conference armed with a giant megaphone—Twitter is exactly like that. No pesky follow-up questions or inconvenient queries from nasty reporters. You tweet, they print. It doesn’t get sweeter than that.

How foolish then to waste that precious twitter time detailing your vapid existence, thoughts etc. when you could be doing something a lot more fun… like messing with our celebrity-obsessed minds. Kinda like King Khan whose one tweet can throw an entire city into depression, and whip the media into a frenzy, as they anxiously parse his every word like lovesick girlfriends. Observe and learn:

April 13 @iamsrk: “Final thanks to Kolkata audience…You make us proud…couldn’t do the same…and can’t make promises for future either…have lost the right…” NDTV: “Is SRK tweeting his way out of Kolkata Knight Riders?‎” Is he? Ohmigod, ohmigod, he’s dumping me!

April 14 @iamsrk: “everyone jumps to silly conclusions as soon as v lose. idiots who dont know perseverence & passion make me who i am.” Aww, what a sweetie! Wonder why we ever thought our persevering, passionate hero was ever leaving us.

Truth be told, deep in my schadenfreude-riddled heart, I secretly wish you will do none of the above. Celebrity scandal is the modern form of gladiator sport, except it’s the masters not the slaves who battle one another. So in the interests of democracy, I insist you and your fellow celebutwits remain self-indulgent and out of control. Feel free to sext, tweet, and videotape your way into trouble. Remember, technology is your friend.