After Bihar: Modi the Diminished

Was Modi blinded by his own aura? 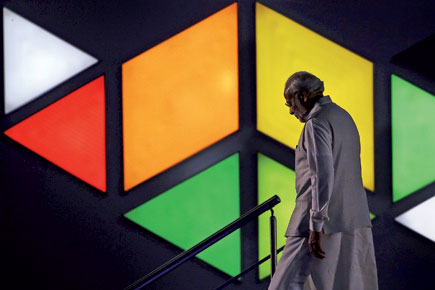 Dramatic tension in Indian politics is still provided by one man who sees himself as the sole spokesman of a nation’s utmost fears and its untapped possibilities. It could be the overreach of the mortal, but for someone whose faith in his own legend is unshakeable even as he loses the aura in the real world, it is just natural to mime gods. In Bihar today it is not the magnitude of the victory or the rise of a simulated brotherhood that alters the script, but the man’s dented divinity. No matter, as you read this, he is elsewhere, far removed from the ghosts of Pataliputra, sculpting his own cult to the thrill of a more receptive audience in London. Leaders powered by the idea of being the chosen one are not here to be trapped in a bad scene. They shift the scene to regain the thunder. Narendra Modi is one such leader.

Is the story getting too familiar to hold our breath? On the stump, Modi’s salvation theology was larger than the combined sociology of his antagonists Lalu Prasad and Nitish Kumar. It was not that he was making Bihar a plebiscite on his popularity; Bihar for him was another inevitable battlefield along the way. Modi’s battle began more than a decade ago, and for a firm believer in the uses of adversity, the theatre of election provided him the perfect setting for making himself different—and larger than the combined size of his tormentors within and outside the party. The rapture of 2014 did not stop the quest. Being in the arena is the default existential mode of the man who wants to prove that he is the One.

Bihar too was his election, by his own choice, and set against the quasi sub- nationalism of the brotherhood, his campaign was purely nationalistic, and it was intended to be so. Bihar just happened to be another place to play out his indispensability, and his opponents just another reminder that regional satrapies would not be able to derail his mission. He was not afraid. Call it the Icarus complex or whatever, he still thought the India he had won in 2014 would sway to his song in spite of the subterranean resistance of caste. There could not have been a better backdrop than the proverbial badlands, where the worst instincts of politics are legitimised as social justice, for the song. There may be a million theories, built on caste and tribal affinities, about what did work and what did not, but, in the end, the loss of Modi was bigger than the gain of Mahagathbandhan.

The Modi on display in Bihar, in spite of the aplomb and the electricity it generated, was a compromised moderniser. In 2014, it was the struggle for power that defined him. And he loved the situation of being the lone man pitted against the calcified authority of Delhi. In Bihar 2015, the struggle was overshadowed by the power he personified—singular, inscrutable and insular. Then, there was a lightness about his style as he played with the mind of India, as prophet and proselytiser, as dreamer and loner. Modi in Bihar was a leader whose every word on the stump only made us aware of the words he has not uttered as prime minister. When he spoke about development, it did not hide the cultural backwardness of people who felt empowered by his success. Then he was a fighter armed by nothing but biography. Today, he is caught between his own iconography and the idiocies of the cultural right. He did lose more than Bihar. He lost the power of being the One.

He should have seen it coming, but he was blinded by his own aura. Power did not liberate him; it stiffened him. For the man who loved situations of adversity, there were many, only if he was audacious enough to see the mad men of Hindutva as his enemies, not as bearers of his cultural heritage. When India was being mythologised as a sacred space threatened by the profanities of the outsider, he should have realised that what was actually threatened was his modernisation agenda. He was elected for a better life, and he should not have let the loony legion to turn his mandate into a licence for reimagining India as a culturally unipolar Ruritania. He let it happen by choosing not to be what he essentially is: a man who brooks no resistance to his pursuit of the future. While being tolerant of a sanguineous fantasy, he failed the India that dreamed with him in the summer of 2014.

Bihar is the price of such contradictions, not to be shared but paid by Modi alone, because no one else matters in the party or the government today. Which doesn’t mean that the crack in Modidom is the best thing that could have happened to Bihar. The triumphant brotherhood is the coming together of two versions of social pathology. Lohia’s ageing progenies may still be socialist rebels in their rhetoric, but Bihar owes its status as one of Asia’s poorest places to the collective perversions of the so-called politics of social justice. For Lalu, it began as pastiche, progressed as kitsch, stagnated as a sub-rural joke and ended as a kitchen disaster—and now he is back as both Godfather and Kingmaker. Nitish has that rare flair for balancing loftiness with convenience. In the wreckage left by the Lalu years, it was easy for Nitish to build a reputation for development. Considering his moral elasticity, Nitish could very well be on the path to becoming the new Rabri Devi of Bihar.

For Modi, Bihar is the last alibi. Ideally, it should be an occasion for personal as well as political reorientation of India’s most popular politician, and its finest administrator. The Great Communicator needs be at play not only in Madison Square Garden or Wembley but in India too, for he alone deserves to be heard, not the madmen of the Sangh Parivar. He should also realise the uses of empathy at home. Let tears well up in his eyes occasionally in the company of Indians as well, even if they cannot be as page-one friendly as Mark Zuckerberg. You could be a glad-hander not just in San Jose but in Delhi as well. An emotional covenant with the people helps in the media age. What can undo Bihar most decisively is his will to be just himself: a politician driven by the transformative powers of politics. A change in the life of India for the better is what finally will make him a better prime minister for the next four years and beyond.

That is the challenge of a true conservative, and to be one, to quote the English philosopher Michael Oakeshott, ‘is to prefer the familiar to the unknown, to prefer the tried to the untried, fact to mystery, the actual to the possible, the limited to the unbounded, the near to the distant, the sufficient to the superabundant, the convenient to the perfect, the present laughter to utopian bliss.’ The prime mover of Indian politics is still the best bet to make the republic smile.