Never trust a sentence that begins with ‘Baby’ 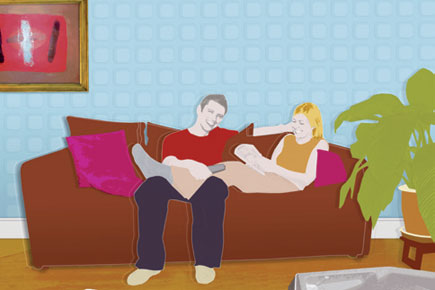 Never trust a sentence that begins with ‘Baby’

A couple of months ago, the boyfriend and I had an important conversation. I was lying on the sofa reading my book and he was watching The Godfather for the gazillionth time, when suddenly, he started massaging my feet. That should have been my first warning because, usually, I have to cut all kinds of deals—taking over driving duty, relinquishing grocery shopping privileges and unspeakable boudoir promises—for foot massages.

“Baby?” he murmured, “I need to ask you something.”

The second he uttered “baby” I knew something terrible had happened. We’re not a honey-baby-jaan kind of couple. I hate being lumped under generic relationship tags. I like hearing the sound of my name. I like that he says it in a way just slightly different from the way others do. An outsider can’t tell the difference, but we know. Prefacing statements with “baby” is our way of preparing each other for bad news, like “Baby, it’s possible I may have forgotten the tickets at home,” or “Baby, that dress isn’t very flattering.”

“Yes?” I said cautiously, sitting up.

There was silence, while he continued to rub my feet with vigour. I flirted with the idea of letting him finish the massage before prompting him to continue, but curiosity got the better of me.

Worst opening statement ever. Because, like clockwork, my imagination conjured a list of worst-case scenarios to choose from. There were the usual—he’s cheated on me, he wants out, he’s moving to some far corner of the earth, he’s going to tell me he’s broke—and the unusual—he’s contracted some horrible STD and he’s given it to me too, he wants out because I’m too demanding, he’s joined some religious cult and taken a vow of celibacy, he’s secretly a gambler and needs me to pay off loan sharks.

“Baby, will you please just tell me?” I thundered.

He did. And I wish he’d picked one from my usual or unusual worst-case scenarios.

“I want you to meet my parents.”

I now know the meaning of deafening silence.

“But what?” he asked firmly, almost like he was ready for an argument. Clearly, the bugger had come with a plan of action and rehearsed his piece. I could feel the wheels of his mind turning, going over the bullet points. I couldn’t think of a single good reason to say ‘no’, so I decided to salvage what I could of the situation.

“Fine, I’ll do it. But I need some time,” I said, rapidly thinking of my own plan of action. All the meeting- the-parents scenarios I had ever seen in pop culture flashed before my eyes as I agreed to the prospect with all the enthusiasm of a prisoner on death row being asked to tea with the executioner. I thought of the collective wisdom of Elizabeth Bennet and Lady Catherine, Shah Rukh Khan and Amrish Puri, Ben Stiller and Robert De Niro, Jennifer Lopez and Jane Fonda, Monica and Chandler, Lily and Marshall and shuddered. I suddenly understood why all my friends—every last one—who had experienced the rigours of arranged marriage, had come out of the experience at least five kilos lighter. Who can survive multiple rounds of meetings with many different sets of parents without throwing up in fits of panic?

“How much time?” He asked, obscenely overjoyed at having won so easily.

“At least until Diwali.”

At that time, Diwali had seemed so far away that it was easy to ignore the inevitable. But time does this weird thing, flying past at twice its regular speed, especially when hurtling towards an exam you haven’t prepared for. And so, last week, Diwali snuck up on us and the Devil came to collect.

Anyone who’s ever had to do it knows that meeting the parents is a scary prospect at the best of times. It’s a hundred times more so when your relationship is a riddle in the Hindu-Muslim spectrum.

“Please God—if you exist—just don’t let them be Modi supporters,” I prayed fervently as we exited the car to enter the boyfriend’s childhood home.

“Ready?” he asked and I instantly wanted to punch his face while simultaneously throwing up.

And then he unlocked the door.