A Cowing Down Story

The intricacies of not eating beef in Haryana 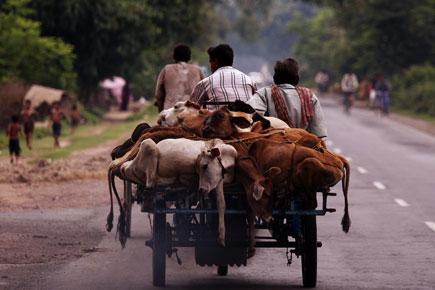 For someone who wants nothing to do with beef, Haryana Chief Minister Manohar Lal Khattar keeps getting embroiled in that delicious meat. He is a man who, after a lifetime in politics, tasted power only a year-and-a-half ago when the BJP formed a government in the state. Power might or might nor corrupt, but beef illustrates how it can complicate.

All through his long political life as a right-winger who woke up in the morning to circle the cow three times before starting his day, Khattar would have had no ambiguities about the hell reserved for beef eaters. Ideologies survive at least a few months in government and soon after becoming Chief Minister, Khattar brought in a law that could send anyone who slaughtered a cow in Haryana to jail for up to 10 years. In October, a year after he came to office, he was still allowing Muslims to live in India only if they gave up eating beef. The first rap on the knuckles came then in the form of popular indignation and there was a hurried apology for a statement that he said he had never made.

And now we have another instance of Khattar stumbling on the subject when he seemed to suggest that while Haryana would not allow Indians to defile themselves by eating the cow, foreigners might be able to provided they had a licence. Just as suddenly, perhaps surprised at the reaction, he clarified that there was no such proposal, making it his second U-turn on something related to beef.

A licence for beef eating is modelled on permits to drink alcohol that are issued in states such as Gujarat. To copy a stupid idea doesn’t make it any less stupid, in fact more so. You could, for example, by the same token have breath analysers for beef eaters, Beef Eaters Anonymous for those who want to give up eating it, and so on.

There was also the question of what gave a foreigner any more right to eat beef if the reasons that Indians are denied it don’t change. Does the cow turn any less holy if it is meat for an American or Japanese? The most irrefutable and concise argument against beef eating that some right-wing devout Hindus make goes like this: ‘Gai hamaari mata hai’ (the cow is our mother). Does it stop being one when catering to a foreigner’s hunger?

Khattar’s subsequent volte face is fortunate for him because a licence antagonises both beef-eating and non beef-eating Indians, and foreigners really don’t care if it is not on the menu. But that he should have mooted the idea indicates a propensity to compromise on the issue. This is the inevitable fate of all politicians in democracies, even those who come to power pandering to fundamentalist ideas. Unless they have the ambition and ability to be absolute dictators, they have to negotiate with many forces.

Khattar’s initial comments on the beef licence came in the wake of an upcoming summit for investment in the state that foreigners would participate in. All he wanted to be was a good host, and what was a cow or two in the bargain.