The ‘gamechanger’ cliché sits well on him. A man of great talent by any reckoning, Yuvraj Singh will need to be at his best for India to go the distance. Over dinner at his house in Delhi, he spoke at length about the upcoming biggie 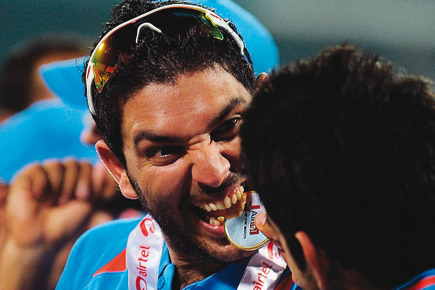 The ‘gamechanger’ cliché sits well on him. “I’ll do everything I can to make it a success,” says Yuvraj of the upcoming biggie.


The ‘gamechanger’ cliché sits well on him. “I’ll do everything I can to make it a success,” says Yuvraj of the upcoming biggie.

Q Ten years of international cricket and yet the ‘underachiever’ tag sticks to you. You have been unreliable of late with the bat. Is this a worry leading up to the World Cup?

Yes, I haven’t done well in Test cricket. But I’ve had a decent ODI career. I did not have a very good 2009-10. Injuries affected my game. But in recent times, I’ve been hitting the ball well. In the sec­ond ODI against South Africa, I got a very good 50. I know I can do better, and am really looking forward to the World Cup. It is one of the most important tournaments of my career, and I’ll do everything I can to make it a success.

Q Do you think this is our best opportunity to win the World Cup?

We have a very good side. There is a lot of depth in batting and bowling, and most importantly a lot of our players are in good form. If Sachin and Sehwag are able to give us a good start, it will give us the momentum we need. And then Gautam, Virat, Dhoni, Yusuf and I will do the job in the middle order. Yusuf’s form in South Africa has given us a lot of firepower at number 7, which should help a lot in the World Cup.

Q It must have been disappointing to lose the ODI series to South Africa.

The 2-1 lead was a great opportunity to win the series. We fought hard, but in the end it wasn’t enough. But right now, we’re  not thinking much about South Africa. Our focus is on winning the World Cup. We are a capable side. What stood out in South Africa, despite our 2-3 loss, was our ability to be competi­tive till the end. It was a very good series and we’ve  won confidence as a result.

Q Many players in this side were around in 2003 and 2007. Yet, this time, India have been  tagged the favourites. What makes this side different from the one in 2007?

The 2003 World Cup was special. We had a dream run till the final. I was young, and sharing the dressing room was the greatest feeling. We won eight consecutive matches on our way to the final. By contrast, in 2007, the batting combination wasn’t right. Too many players were in and out of the side. The coach wasn’t doing a good job. We weren’t confident enough. This time, it’s completely different. This team has the batting firepower and the bowling unit looks in great shape. We are a bet­ter fielding side, which is so crucial in such a tournament.

Q You have often talked about batting firepower. Do you think batting will hold the key on the flat Subcontinental pitches?

Definitely. Indian pitches are good for batting, and bowlers will have some thinking to do. But a good bowling side is always rewarded. Spinners will surely have an impact on the tournament.

Q Which teams will India be wary of?

Any team can win. Australia and South Africa are good, but Sri Lanka and West Indies too are competent. I also rate England a good side, though they are a better Test team. It is very open, this World Cup. It will depend on which side carries the best momentum into the knockout stage and who handles pressure better.

Q A word on Sachin. The skipper is on record saying the team wants to do it for Sachin.

Sachin is one player I really look for­ward to seeing perform. I’m sure he will go past a few more milestones in this tournament. Everyone  in the team knows this is probably his last World Cup. And all of us want to do it for him.

Q You seem to be bowling well. That should give you a lot more confidence—in being able to contribute as an all-rounder.

I am a batsman first, but it’s really nice to contribute to the team’s success with the ball. I’ve taken bowling very seri­ously at the nets and am enjoying it. It always helps to be able to bowl a few overs every game, for we need part-tim­ers to bowl the fifth bowler’s quota. As I said before, spinners will play a cru­cial role. For us, the good thing is that Harbhajan is in good form. He has wick­ets all over the world and I’m sure he will play a key role. Even his batting has improved immensely and he is capable of finishing a game on his own, which gives a lot of strength to the Indian team. Between Bhajji, Yusuf and myself, India has a lot of variety in the spin de­partment.