The Height of Cricket 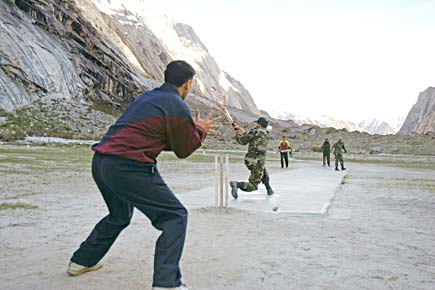 
IMAGINING PLAYING cricket on the highest plateau in the world, with Mount Everest as the backdrop. It’s easy, provided you’re tough enough to reach there first. On 21 April, some amateur British cricketers did what would have been laughed off as an idea of the insane. They played the Twenty20 version of the game at the base of the Mount, on a plateau called Gorak Shep, 16,940 feet above sea level. Aptly, the two teams were named after New Zealander Edmund Hillary and his Sherpa guide Tenzing Norgay, the first to climb the 29,035 feet peak on 29 May 1953.

Team Hillary defeated Team Tenzing in the match, which not just set a record for a game played at the highest altitude ever (this is pending ratification by Guinness World Records), but also raised around £250,000 from sponsors for two charities, the Himalayan Trust UK and the Lord’s Taverners.

A group of select spectators, comprising 50 lawyers, medics and city workers from Britain, shelled out £1,500 each for the event. They also underwent months of training for the nine-day gruelling trek to the venue, where oxygen levels drop by a third of what is available at sea level.

The idea germinated when British mountaineer Richard Kirtley, who led the expedition, stumbled upon the plateau while on an expedition to climb Everest in 2007. Gorak Shep is the last village before the Everest base camp. In Kirtley’s eyes, the plateau was tailor-made for playing cricket, but when he suggested this to the locals, they thought him mad to even propose such a preposterous idea. “I think the British are crazy,” says Pradash Prajapati, one of the Sherpa guides who accompanied the cricketers, “though I like their passion to do better than others.”

On his return to the UK in 2007, Kirtley advertised for people to accompany him on this fund-raising expedition. He didn’t have to wait too long to find 50 enthusiasts. After 18 months of planning, the group set off on the crazy expedition.

They landed in Kathmandu on the morning of 10 April. There, they split up in groups of ten to take a Yeti Airlines flight to Lukla, at an altitude of 2,840 metres—and arguably one of the world’s most frightening sojourns. It took all of 12 flights before the baggage and expedition kits were secured. No rest yet, though. Exhausted, they began the eight kilometre trek down mountain trails and across ravines connected with rope bridges. Finally, in the evening ended the first day’s trek at an expedition hut in Phakding.

Gareth Wesley, member of Team Tenzing, remembers the complete exhaustion, made worse from a medical condition he suffered from. “If anyone told me right now that this expedition is some kind of jolly, I’d have to deck them,” he’d announced then. Yet, the next day, they had to look forward to an ascent of 1,000 metres to Namche, over a tortuous stretch of 12 to 14 km. It proved to be one of their hardest days of trekking.

It was not before 14 April that the group got to relax for a few hours. They took a short break at Shyanboche to drink in the view of Everest before the clouds and mist rolled in. That afternoon, they reached Khumjung. In the village, some of them found a bakery selling, of all things, apple pie. Their joy was unbelievable.

They also joined in a game of cricket that some children were playing in the village square. “A group of 12 of us coached children cricket at Khumjung school,” says Wesley, “To see the joy on their faces was uplifting. The school was at the bottom of a set of stone steps that seemed straight out of an Indiana Jones movie. So, it really felt like some sort of frontier journey.”

A climb at a 35-degree incline, from Khumjung to Tengboche, began the next morning. Tengboche really marked the beginning of the dangerous phase of the expedition—it’s here that the group really needed to be on the lookout for signs of altitude sickness. Team doctor Isla Fox, a physician from Brighton, noted: “Day six was the hardest day. We’d hiked approximately 10 miles and reached an altitude of 4,410 metres. It took its toll as several of the group got acute mountain sickness, requiring treatment. Luckily, none of them appeared too severe.”

The trek from Tengboche to Dingboche (4,410 metres), around 16 km, which rises 600 metres along the way, continued even though some of the group complained of headaches and had to pass on their 20 kg kitbags to the few porters who’d accompanied the teams. By that afternoon, the team had climbed above the tree-line and into the foothills of Everest. The weather had become distinctly cooler. Before long, they would be in sub-zero gear.

17 April was spent at Dingboche. The members underwent strenuous acclimatisation exercises and a full medical check-up. For, the next stretch would take them beyond the 5,000-metre mark into rarefied air.

The next day, they began the climb to Labouche (4,950 metres), after which was the final trek that would take them to Gorak Shep. Kirtley recalls, “The scale of the jagged immense peaks surrounding us as we walked dwarf(ed) the expedition. I thought if we succeed in putting on a cricket match over the next three days, it will be because the Himalayas let us do so, not because we have any power over the environment.”

Near Labouche, the landscape became more like a barren moonscape, surrounded by mountain, rocks and rubble. That night, two members, Jamie Zubari and Joe Williams, stayed behind because they felt daunted by the thought of taking on thinner air at Gorak Shep.

Expedition notes, recording events on 19 April, said: ‘The first close-up sighting of Everest really draws the breath of the expedition… After a further 30 minutes, we come face to face with the famed and notorious Khumbu Icefall. Several specks are moving upwards… We are witnessing this season’s Everest summit attempts before our eyes. We keep going… (and) descend into Gorak Shep. Again, we all have ‘a moment’ as not only Gorak Shep, but our cricket ground comes in to view. We make our way down and it’s not long—not much more than 30 minutes—before the teams are walking on the ground and are deciding which way the wicket should face.’

Soon a committee comprising captains, umpires and selected players was formed to prepare the pitch for the games. They got down to the task by engaging the locals in the clearing of stones, pebbles and rocks in the playing area.

On 20 April, after nine gruelling days, it was time for a face-off between Hillary and Tenzing. Both teams practised on the pitch, with Hillary captain Glen Lowis observing that the wicket was “surprisingly good with reasonable bounce”.

Match day, 21 April. The match started at 9.30 am. Hillary won the toss and elected to bat first. Here is a match report by freelancer Alan Curr, who was with the team: ‘Today Team Hillary claimed a historic victory over Team Tenzing at 5,165 metres above sea level, the win being sealed when captain Glen Lowis bowled fellow Kiwi Mike Preston. Hillary went off to a terrific start, after winning the toss and batting Lowis and Cardiff cricket club captain David Kirtley put on 82 for the first wicket, with Kirtley striking four sixes on his way to a 34-ball 45, the top score of the day… Some lusty blows from Chris Palmer and Charlie Campbell helped Hillary to a competitive total of 152 for 5.’

The last word was appropriately left to Lowis. On the Queen’s birthday, he emulated his countryman, Sir Edmund Hillary, in achieving a first on the slopes of Everest as he led his side to victory in the highest-ever game of cricket.