The Genius of Roger Federer 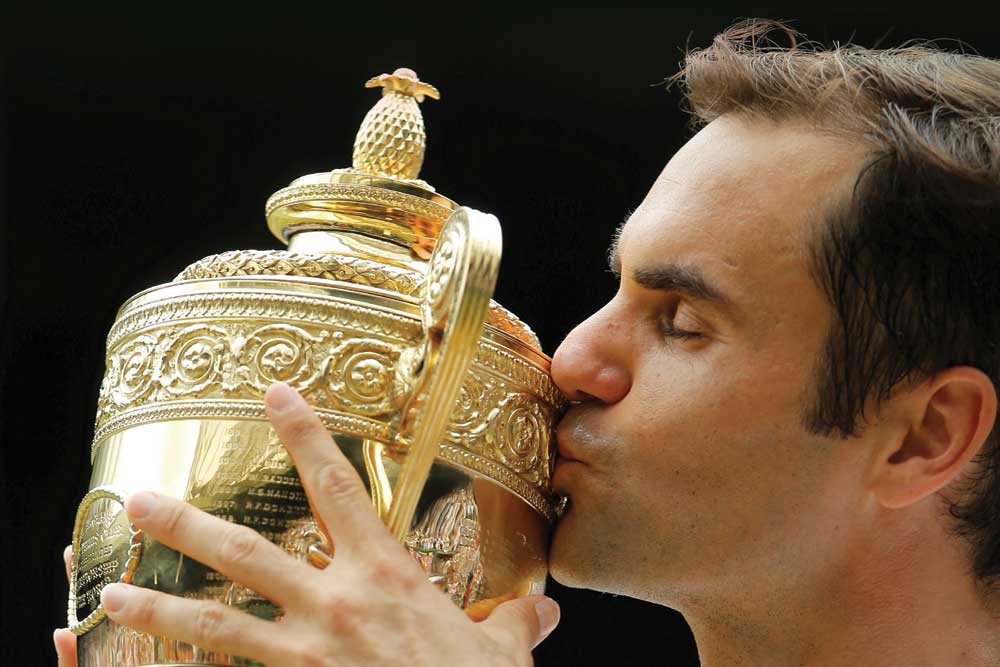 A WARM WASH of applause on Centre Court. Laughter and tears. Drops of rain. A rainbow over a bed of grass. Hirsute hands holding a trophy of gold. The trophy caught between a glint of sunshine and the elongated reflection of a face. Roger Federer’s kissing face. A fading imprint of lips on gold, like an afterthought. More drops of rain. More applause. More laughter. More tears. Some sunshine.

This immaculate Wimbledon moment, perhaps the most immaculate moment in all of tennis, was also an epiphany. It occurred to me that Federer’s greatest achievement this year is not this Wimbledon title, his eighth, one that sets him apart from any other man who walked this earth. Neither was it his improbable run at the Australian Open, where he won his fifth title in Melbourne back in January, which made him the only man to win five or more Grand Slams at three majors. Also rule out his meditative dominance at an age when sport, especially his sport, should not and previously could not be dominated.

Federer’s singular achievement this year, his most Federeresque accomplishment yet, has been to mock us—his fans, his critics, his followers, his lovers—for ever having a fully formed, set in stone (diamonds, mostly) idea of Roger Federer. He, unlike what we thought, is not limited to being the greatest tennis player of all time and neither is he the greatest sportsman who ever lived. Federer is a still forming, still mutating, still evolving essence presented in human dimensions, whose tomorrow, inexplicably, carries more potential than his yesterday.

How else can you explain him, days short of his 36th birthday, winning his first straight-sets Wimbledon (he did not drop a set through the tournament) on July 16th, some 10 years after his supposed prime? The late David Foster Wallace described him as ‘a creature whose body is both flesh and, somehow, light’. If you saw Federer in the quarterfinal against Grigor Dimitrov, a boy far from coming to terms with his nickname, ‘Baby Fed’, you too will swear the flesh was invisible—his having regenerated into a single halo of incandescence, with a bandana and a racquet.

‘I’m looking through you, you’re not the same,’ a song by The Beatles goes. That’s now Roger Federer.

Federer isn’t simply detonating his way past opponents in 2017, he is doing something harder; he is making beaten men smile at the way they were beaten. You could see it on journeyman Dušan Lajović’s face in the second round. And in veteran Tomas Berdych’s words after the semifinal, when he said: “I don’t see anything that would indicate Roger is getting older.”

The number 17. It has a special, annoying significance in Federer’s life. How he must have, not so long ago, despised it.

At the Australian Open this January, Federer showed up without having played a competitive match in over six months, rest forced upon him due to a knee injury. After going two decades without having suffered an injury on court, Federer tore a cartilage while running a bath for one of his two sets of twins. It made him pull out of French Open 2016—the first major he wouldn’t attend after 65 straight Grand Slam appearances, a streak stretching back to the previous century.

At about this time last year, just after his Roland Garros lay- off, Federer limped back to action and played Wimbledon. And he promptly lost. It wasn’t so much about whom he lost to (Milos Raonic) or how he lost (five sets). What sent a chill of caution down our spines was where he lost—the semifinals. In nine previous Wimbledon semifinal appearances, Federer had felt as comfortable in this round as he does in his glass- and-stone palace in Dubai—winning nine times out of nine, eight of them in straight sets, dropping all of one set in 28 attempts.

Now he’d dropped three in one match to Raonic. Couple that with his age, lack of trophies in 2016 and the doomsday announcement (of missing the rest of the season, which meant missing out his second Slam of the year, the US Open), Federerphiles across the world sensed a feeling better expressed, and far more devastating, in his native Swiss-German.

‘Anfang vom ende’. Or, beginning of the end.

FEDERER’S STYLE OF play, largely due to his floating movements and lithe groundstrokes, is often compared to a ballerina. Or poetry (note: not a poet, but to a flow of verse). Or even to music performed by Wolfgang Mozart, another tortured genius. But without taking anything away from these incredible art forms, all of which are practiced down to the final step or recital and performed in front of an audience exactly as they were practiced, Federer’s art is based almost solely on improvisation. He is mostly reacting to shots hit by his opponents.

If you have to break it down to the fundamentals, Federer chooses his type of return, which further breaks down into several variables—the arc of his swing, the tilt of the face of the racquet to inject spin, the point of contact on the strings, the direction of the hit, the crosswire-accurate landing spot on the other side of his court and finally, his follow through.

Federer isn’t simply detonating past opponents in 2017, he is doing something harder; he is making beaten men smile at the way they were beaten

All this, within a fraction of a second. All this, while shifting and redistributing the balance of power between arms, shoulders, hip and legs. All this, apart from trying to win the damned point, Federer does so without ever looking out of step or out of tune. Stroke after stroke, rally after rally, game after game his mind, body and play are in harmony.

As a former colleague, who has spent a career immersed in agency photographs, once observed: “There are no inelegant frames of Roger Federer.” In other words, the fingers of his non-leading palm are never knotted, nor does his body apply a taurine force. Federer is, somehow, always captured in a state of feline beauty.

Those ballerina/verse/Mozart comparisons returned in full- swing soon after his comeback this year, at the Australian Open. Leading up to the Slam, Federer chose to not participate in any warm-up events around Australia, essential to give a player a feel of both the surface and his game. He treated his first round in Melbourne like a warm-up instead, grinding out an un-Federer-like four set win against No 300 in the world, Jurgen Melzer.

For the first time in a long time, perhaps dating back to his teenage days, well before an era was named after him, Federer was advancing through the stages of a Grand Slam without being saddled with the expectation of winning it. Then, out of nowhere, the stars didn’t so much as align as they conspired. In the second round, Djokovic, two-time defending champion and six-time Aussie Open winner (no one has won it more), lost in the second round. In the following round, Andy Murray, recently crowned No 1 and knighted with the title ‘Sir’, too fell.

Federer still wasn’t a clear favourite. Because on the other side of the draw, creeping up as discreetly as a gecko was his great rival, Rafael Nadal. Despite Nadal being plagued with a spate of injuries, the latest being a career-threatening setback to his wrist that kept him under the radar in 2016, the two were on an unlikely collision course. Where else but in the final?

Even Federer was in awe of the surreal turn of events. “I went to open Rafa’s academy in Mallorca a few months back. I was on one leg and he had the wrist injury and we were playing mini-tennis with some juniors and we were like ‘That’s the best we could do right now’,” he said after he and Nadal scraped through their semifinal rounds in five-setters. “Few months later, we are in the final of a Grand Slam. So it’s already special for both of us.”

Nadal and Federer hadn’t met in a Grand Slam final in six years. But in the last three major finals that they had clashed in, across three surfaces including in Melbourne, Nadal had triumphed. The script, hence, seemed all too familiar at the Rod Laver Arena when the Spaniard broke Federer’s serve in the fifth set to nose ahead at a most critical juncture. Still, Federer held his nerve and poise to level the decider. Then he went on to win, and the long wait for Slam No 18 was over.

Fed-fans were already emotional wrecks during the presentation of the trophy, but when Federer spoke into the mic, the real waterworks began. “I hope to see you again next year,” he shrugged. “But if not, this was a wonderful run.” And thus, what could well be called the Federer Farewell Tour, hit the road.

The Swiss dropped more hints on an impending retirement after claiming back-to-back Masters titles in Indian Wells and Miami. Hints then turned into an outright suggestion when Federer, injury- free and minus niggles, pulled out of the French Open in May this year. If he was to become the oldest man in the Open era to win Wimbledon, the withdrawal stated, an ageing body needed rest.

Preparations began in Halle, Germany, a grass-court tune-up that has long been considered Federer’s (second) home. He won the tournament for the ninth time and said: “I’m not sure if I’ll ever get a chance to win this again, so it’s important to enjoy this one.” Federer returning to Wimbledon as the hands-down favourite was always going to be special. But once those words in Halle were spoken, the pilgrims in RF caps were on their way to a venue that is called both Mecca and Cathedral.

It was here on Centre Court where the world, over a period of two decades, saw an ordinary lad from Basel, with extraordinary abilities with a racquet, transcend his sport, constantly changing avatars. From boy to man, man to king, king to an era itself, era to myth. But it was when he caressed that golden trophy to his bosom and accepted his most transformative performance yet on this second Sunday last week, the myth turned immaculate. Like a piece of Wimbledon itself.