The ball that could revolutionise Test cricket 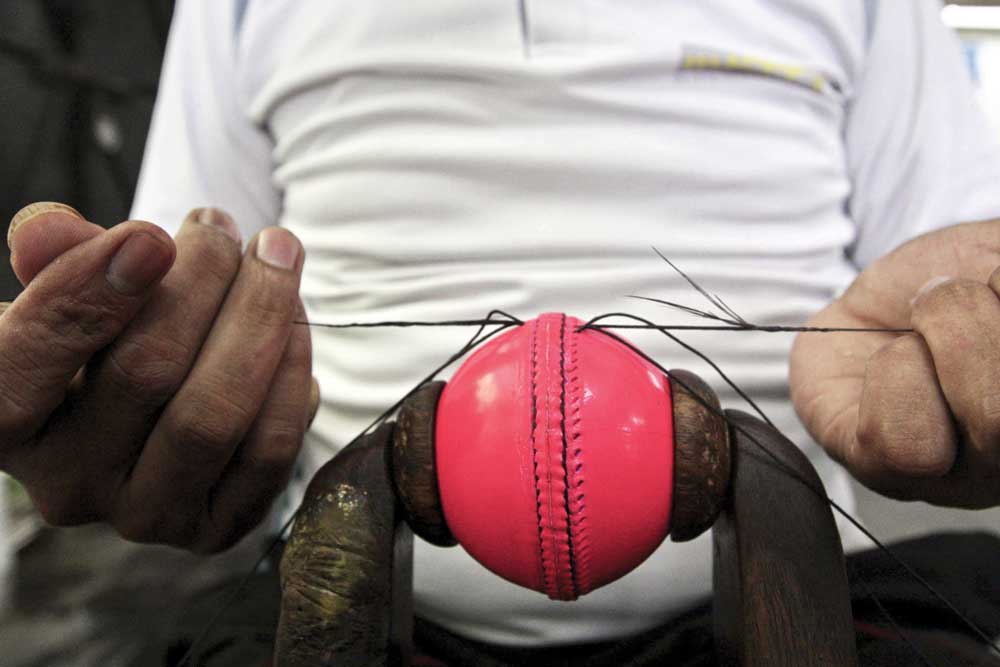 EARLY ONE AFTERNOON this June, as a torrential downpour washed out the only net session before a team’s final game, a cricket ball began to move through several pairs of hands. The players of Bhowanipore Club in Kolkata were about to play the final of the local Super League trophy, a four-day match against Mohun Bagan, a strong club boasting two national stars, Mohammed Shami and Wriddhiman Saha. The prospect of facing Shami, one of the fastest Indian bowlers, without practice on a cloudy day and on a pitch that was said to have a lot of grass on it, must have unnerved several players. But none of them showed it. The ball moved through the hands of the players and the support staff of Bhowanipore Club. Some took photographs with it, while others simply wanted to touch and feel it. “None of us had ever seen anything like it,” Writtick Chatterjee, captain of Bhowanipore Club, says by way of explanation For no one had really seen a cricket ball like this. It was not just hard and glossy, it was bright pink in colour.

Over the years, cricket has evolved along two different planes. There is the limited overs game, which in a span of less than 50 years of existence has witnessed an embarrassing glut of innovation— from a single red to two white balls, from a game played in natural light to day-and-night affairs, from white to coloured clothing where there are fielding and bowling restrictions, not to speak of free hits, and from 60-over matches to 50-over ones, and, now, Twenty20. And then there is Test cricket, a sport that is played over five long days—by all yardsticks, an astonishing anachronism of the modern age. If T20 is a juiced up money-spinner of the 21st century, the Test format is for a small constituency of purists, a game that appears perennially in critical care.

In these times of limited attention spans and lifestyles oriented towards quick gratification, as the diagnosis goes, very few have the inclination to sit through a five-day-long Test match anymore, relegating the once preeminent format of the game to a sideshow. It has come to a point that for it to survive, everyone seems to agree, something drastic needs to be done.

The saviour, cricket administrators across the world hope, will come in the form of a pink ball to be used in a format that stretches from late afternoon into the night with floodlights, a time when audiences are expected to turn up at a ground or sit in front of TV sets. The pink ball will not just be clearly visible both under natural and artificial light, in the hands of people dressed in cream, it will also, most importantly, capture the cool and fun element that is thought to have disappeared from this version of the game. The pink ball has occasionally been used in domestic tournaments in some parts of the world for several years now. Last year, Australia hosted the first day-and-night Test match with a pink ball against New Zealand at the Adelaide Oval. But for any new experiment in cricket to claim sustainable success, the concept will undoubtedly have to be upheld by the cash-rich BCCI and India’s vast cricket audiences.

India is giving this experiment a serious go. Apart from the Super League final between Mohun Bagan and Bhowanipore Club, where a pink ball was used in a multi-day game for the first time in India, the ball will now be bowled at the upcoming local Duleep Trophy tournament. The Rajasthan Cricket Association is also hosting the four-day final of its inter-district tournament, Colvin Shield, in Jaipur with a pink ball from 12 to 15 July. There has been talk that the ball will be used in a Test match against New Zealand later this year. While that plan has been cancelled, according to a BCCI official, the Board may introduce the pink ball after the New Zealand series in a game against either the visiting English or Australian team, provided both sides agree and the ball performs well in the Duleep Trophy.

In a game where microscopic attention is paid to the smallest detail, from the direction of the drift in the wind to the length in millimetres of near invisible grass, a pink ball and a day-and-night affair represents a radical change for Test cricket. Several current and former players like the Chappel brothers and, closer home, Rahul Dravid, Sourav Ganguly, Virat Kohli and Ajinkya Rahane have expressed enthusiasm for the new ball. But there have been others who see it as sacrilege. The former Australian captain Ricky Ponting has been quoted as saying, “I’ve actually been against it the whole time… Test cricket is all about history and tradition as far as I’m concerned.”

VERY FEW HAVE really played with the ball. But suspicions and rumours against it have travelled quickly. Fast bowlers fear that the ball will go soft and won’t reverse swing. Spinners worry that the balls won’t spin. Batsmen claim that the ball might be hard to pick, especially when daylight is fading and the floodlights are yet to come on. Fielders say they may not be able to spot it. There have even been reports of spectators and camera handlers saying they can’t follow the ball. Some cricketers like Adam Voges have even suggested the keeping of separate career statistics for pink ball Test matches.

Brett Elliot, managing director of Kookaburra, which has been working on the pink ball for around a decade, says that no other cricket ball, white or red, has gone through the kind of scrutiny and testing that the pink ball has undergone. “I suspect this is a reflection of our world today,” he says. “…the ball is now at a very advanced stage and Day-Night Test cricket offers a great opportunity to make Test cricket more accessible to fans.” Several colours, from yellow and fluorescent orange, were considered when the ball was under development before pink was selected. “There were many factors taken into account… It was clear the administration wanted to preserve as much of the aesthetics and characteristics of Test cricket as possible, [such as] white or cream clothing, white sight screens, etcetera. Orange and yellow needed dark sightscreens and also left a comet trail on TV cameras,” Elliot says. “Pink was identified as the most suited colour, as it provided the best contrast with the surroundings during the crucial twilight.” So far, Kookaburra appears to be ahead of the curve in the development of the pink ball in comparison with other ball makers. Kookaburra balls are used in seven of the world’s 10 Test-playing countries, with the Duke ball being used in Test matches in England and the West Indies. India uses balls made by the Meerut-based SG. The pink ball used for the first day-and-night Test match between Australia and New Zealand last year was made by Kookaburra. In preparation of a shift that could possibly occur at some point, SG has also been developing pink balls. It is currently being tested in domestic tournaments and has been offered to the BCCI for consideration. Duke, it is said, is also working on its own pink version.

Apart from the colour, the pink ball is said to be identical to the classic one. The core is the same, and hence so is the bounce, hardness and compressive resistance. A typical red ball has its leather dyed in the colour. But for the pink ball, Kookaburra first dyes the covering pink and then sprays a special film of colour on it so that it preserves the ball’s brightness, which is critical, Elliot explains, in evening conditions.

The pink ball, according to many, swings a lot more and longer than the conventional red one, and certainly more than SG’s red ball. Because of the extra layers of pink added on to it, so that the ball retains its visibility longer, it is said, the ball is harder to roughen up—which is essential for reverse-swing and spin. “My theory is that a pink ball will need grassy pitches and a lush ground for the ball to perform well,” says Paras Anand, marketing director of SG. Although he does not quite say it, the implication is that the pink ball won’t spin as much or reverse-swing. “We are working on making the ball behave as closely as possible to the red ball. But because of the different processes involved, they behave slightly differently.”

Parthasarathi Bhattacharjee, one of the cricketers who played the Mohun Bagan-Bhowanipore match, recalls a moment of surprise when the ball, after it was more than 50 overs old, came rolling towards him while he was fielding. “I was at deep point, when the ball came to me,” he says. “But the ball looked and felt quite the same when we first took it out of the box.” To help the pink ball spin, Kookaburra—whose red balls are not particularly helpful to spinners either, since their seam tends to sink as the game progresses—has made the thread that is used to stitch the ball thicker. The colour of the seam has also been changed from green to black. In the Mohun Bagan versus Bhowanipore game, with no practice session with a pink ball to rely on, and only the Australia-New Zealand game seen on TV as a reference point, both teams went in with more fast bowlers and fewer spinners. “In the hot and humid conditions of Kolkata at this time of the year, fast bowlers have little to do,” Writtick Chatterjee explains. “And we had won most of our games up to this point with spinners.” But in this match, Chatterjee, himself a spinner, remembers that the ball was stubbornly refusing to turn even after it had been battered around a bit.

“The ball was just seaming and bouncing throughout most of the day. Sometimes, I think the bowlers themselves did not know which way it was seaming,” Bhattacharjee says. “And facing Shami at that speed with that bounce was really really difficult.” Batsmen from both teams began to take their stances several yards outside the crease to counter the swing. But the ball bounced and swung. The fast bowlers, especially those from Mohun Bagan, began to almost run through the opposition. The entire game lasted a little over three days and nights, with several ducks and single digit scores. Most of the wickets fell to fast bowlers. And Mohun Bagan, the stronger of the two teams, won by 296 runs.

In this particular game, the grounds-men left a lot more grass to help the pink Kookaburra ball last longer. Abdul Monayem, coach of the Bhowanipore team, says that for the pink ball to be accepted in India, it will be crucial that it spins. “The Indian team and most domestic clubs in the country depend on spinners. Though there was too much grass here for spin, going ahead, it will be important that the ball holds up in more abrasive South Asian pitches—and that it spins.” Anand claims that despite all the research and trials, nobody still understands the peculiarities of this ball. “Will it spin? Will it reverse swing? Will the dew impact it? How will it behave in India?” he asks. “The truth is nobody quite knows it yet. Not the players, nor the manufacturers. It is all a bit of a mystery, really. And it makes all of this quite exciting.”