An ace athlete is cruelly denied a spot in the World Championships. PU Chithra is not giving up yet 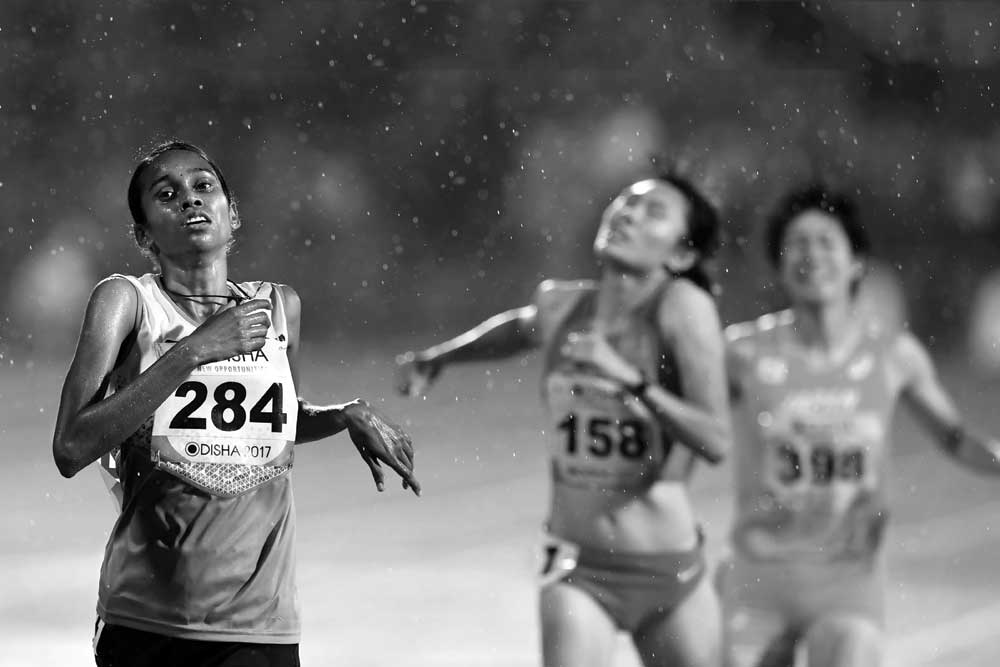 IT WAS DRIZZLING in Kalinga stadium, Bhubaneswar, when the 1,500 metres women’s run of the 22nd Asian Athletics Championships started with puddles all over the track on July 7th. The starter pistol went off for the 12 participants, two of whom were Indians. Towards the half- way mark, two Japanese athletes, the experienced Ayako Jinnouchi and a rookie Nozomi Tanaka, were in the lead with Geng Min of China close behind. A pair of Doordarshan studio commentators, one in Hindi and the other English, were discussing the physiological and chemical changes in the body of a middle-distance runner during a race. They had been impressed by the tactics of the two Japanese in not allowing Geng to overtake from either an inner or outer track. India’s Monika Chaudhary was in fourth position and the commentators were generous enough to refer to her in a sentence or two, the usual ones on whether she’d win a medal.

The runners were on their last lap and starting to accelerate towards the finishing tape. Geng managed to cut through the tactical blockade and took the lead. Then came the moment of the race. Palakkeezhil Unnikrishnan Chithra, a frail girl from Kerala who had been tailing them half-unnoticed for the past three-and-a-half minutes, suddenly sprinted from the outside to get past Nozomi. This was when the commentary box realised that there was an athlete named Chithra. “Will she able to hold on the third position?” they exclaimed.

On the track, Chithra had other plans as she effortlessly pushed Jinnouchi back and overtook Geng to finish at a comfortable five or six metres ahead for the gold. The silver medallist was not even in the camera frame when Chithra crossed the finishing line.

“Of course, I did not expect gold. Before entering the track, all I wanted was a medal as usual. But in the final, with 250 metres to go for the finish, I got a sudden [burst of] energy and surged ahead and finished first. It was surreal and it was great,” she told the media afterwards.

Chithra was one among four children of daily wage labourers, PT Unnikrishnan and Vasanthakumari. Life, right till the moment of winning the Asian Gold medal, had been a battle. That race was won with a pair of borrowed spikes. The one she had was worn out by overuse and not good enough for a competition. So her friend and team mate, KK Vidya, lent Chithra her footwear.

The Odisha state government announced a cash award of Rs 10 lakh for Chithra and other gold medallists. “This time I will definitely buy a pair of new shoes, be it from Hyderabad or from London,” Chithra told mediapersons at Kalinga stadium.

As the Asian champion of the 1,500-m event, she was certain of being part of the Indian team for the World Athletic Championship to be held in London. But she was dropped from the team because selectors of the Athletics Federation of India (AFI) say her performances are not up to the mark. She had not touched the qualifying figure of 4:07.50 minutes since her winning time was 4:17.92. Her fellow gold medallists at Bhubaneswar, Sudha Singh (steeple chase), and Ajoy Kumar Saroj (men’s 1500m) were also omitted for the same reason.

“I did not expect gold. All I wanted was a medal as usual. It was surreal and it was great” – PU Chithra

Within less than a week of the greatest achievement of her career, Chithra found herself running pillar to post to get the decision reversed. Her coach Sijin NS moved an urgent writ petition at the High Court of Kerala and got a favourable order. But it was too late. The International Association of Athletic Federations denied the Indian Federation’s late request, which Chithra’s well- wishers see as eyewash to comply with the court order. The order has pointed out that the selection process didn’t appear to be transparent and qualified athletes were ignored, something the selection committee that included former athletes PT Usha and Anju Bobby George did not want to address. Usha convened a press conference to deny reports that she had not taken up Chithra’s case in the selection committee meeting. Usha was visibly upset because the support Chithra was garnering had also been transforming into anger against her. Everyone in Kerala wanted her to go to London even if no one expects her to win a medal there. “Now after an intense week, we realise that she will not be going to London. But it was overwhelming to be loved like this,” says Sijin NS, who has resumed Chithra’s routine training.

But, as her father Unnikrishnan says, this is a heartbreak for all of them. “Is this because we are poor or undereducated?” he asks. “If all those who omitted her from the squad had as difficult a life as ours, they could have realised how big a sorrow this is for my girl.”

Kerala’s sports minister AC Moideen has visited them to express solidarity and the state government has also awarded Rs 10 lakh to gold medallists of the Asian Athletics Championship. Chithra says what she immediately needs is a permanent job to look after her ageing parents who still work to make ends meet.

Chithra hit news headlines for the first time in 2009 as a 14-year-old ninth grader running barefoot in the Kerala State School Athletics Meet and winning the gold in the 3,000-m and silver in 1,500-m cross country race. The 56thNational School Games in Pune in 2011 was the turning point where she won gold in the 5,000-m, 3,000-m and 1,500-m categories along with a bronze in the 3-km cross country race. A year later, Chithra won a triple gold. In the National School Games held in UP in 2013, she won four gold medals. She followed it up with a gold in the 3,000-m race in the first-ever Asian School Athletics Championship. In the 59th Indian National School Games, Ranchi, she won four gold medals again.

Sindhu Kumar, chief cameraman with Manorama News, remembers meeting two lean village girls in 2011 at the Kerala State School Athletics Meet. “Both PU Chithra and KK Vidya were running barefoot. Chithra had an injury and had covered her leg with a cotton cloth.” Her victories despite the pain instantly made Chithra the darling of the people. “Ordinary people, mostly women workers, came to give Chithra their hard-earned money,” he says.

Chithra’s mentor Sijin NS, the physical education trainer of Mundur Higher Secondary School who has known her since she was 10, says that she ran barefoot in 2011 for a different reason. “She didn’t have the required body weight to wear spikes. It may cause an injury if we wear spikes without having sufficient body weight,” he says. She was barely noticed by anyone in 2011, he says. “The next year we had an athletic champion in Nirosha PV in the state meet. We gave her a grand welcome, and Chithra who was in Class VI was inspired by this. Next day, she came and told me that she too wanted to win a gold medal. She wanted to be like Nirosha. We usually don’t give rigorous training to young children. We engage them more in games more than workout and warm-up sessions, otherwise they would lose interest. Chithra was given some game practice, but I saw her participating in the warm-up sessions with the senior boys,” says Sijin. With a shy smile, Chithra says, “I wanted to win competitions. I thought playing with kids my age wouldn’t help.” That was the beginning of her journey.

Mundur Higher Secondary School in Palakkad district, a village school, has lately had a remarkable influence on Kerala’s athletics. Many parents are agricultural labourers unable to provide nutritious food to their children. KK Vidya also belongs to a family of modest means, like Chithra. “We provide food every day after practice,” says Sijin. Practice begins after school hours, followed by dinner. “We wanted to give them protein-rich food. Tapioca and beef are the usual items on the menu,” he says of these affordably cheap protein sources. “Chithra’s commitment was amazing,” says Sijin. “Even if I wasn’t present at the ground, she would do every exercise with dedication. She never took an opportunity to relax.”

The Kerala High Court is considering Chithra’s contempt-of-court petition against the Athletics Federation of India for refusing her a slot for London. In the meantime, she is working out even harder on the practice ground because she is determined to spring back. “I am training myself to accept reality,” she says, “even if it is bitter.”