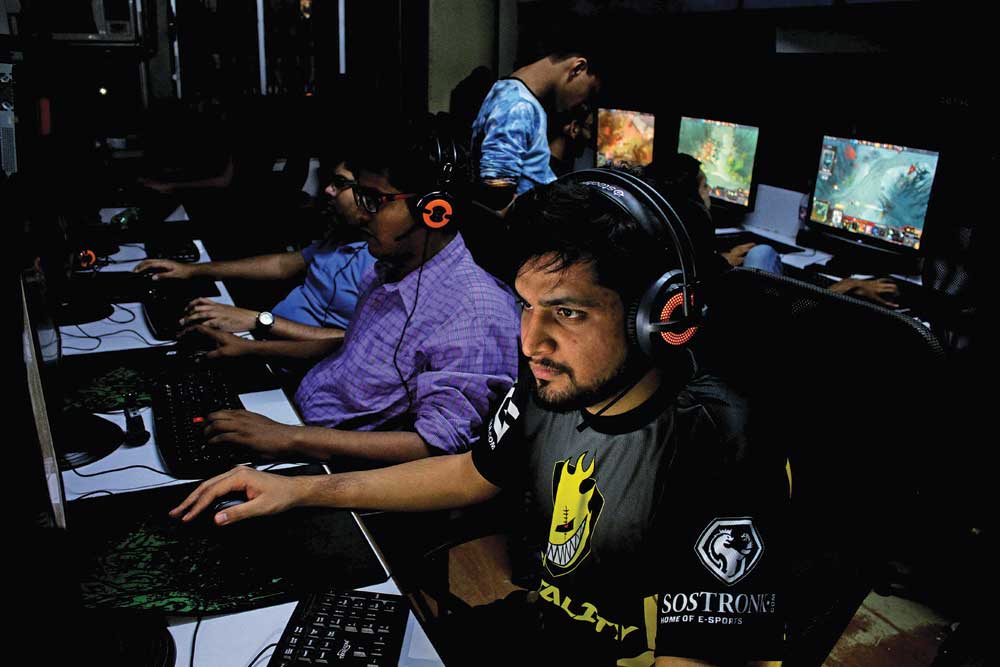 AS FAR AS Ankit Panth can remember, much of his late adolescence was spent in gaming parlours. He bunked his school and college classes in Mumbai to play the latest games, most of them first-person shooter games like Counter Strike. And then, almost every night at around 11, after his parents had gone to bed, he would sneak out again to play another round at a neighbourhood parlour that stayed open all night behind downed shutters. He would return by 4 am, before his parents woke up. Occasionally, on such late-night escapades, loud bangs on the shutters would disturb an engrossing game, and he’d find his father on the other side, sleepy and angry. “He had this habit of waking up in the night sometimes. And when he found I was missing, he would come out looking for me,” Panth remembers. And then, to his embarrassment, he would be scolded and dragged out. But he would return again and again to the parlour, both during the day and late at night, until he became, as many gamers attest, one of the city’s best Counter Strike players.

After Panth completed his college education, he began to moonlight as a disc jockey while he worked with his father’s friend in the latter’s marble business. But a time came, he says, when he had to be serious about his career. “So I chose what I excelled at,” he says. “I decided to become a professional gamer.”

In the last few years, a quiet subculture has grown in India. Evident at internet cafes and gaming arcades, Indian youth—mostly male—have been gravitating towards what they call the world of e-sports (electronic sports). “You will be amazed, but it has grown so rapidly here,” says Sat Mayekar, who handles the marketing of Express Interactive Software, a top distributor of such games in India. “And just about everywhere in the country, both in the cities and small towns. Guys are gaming every day everywhere.”

Traditionally, gaming has primarily been a single or double-player offline activity in India. Internet connections were poor and pirated game CDs were always available for a fraction of their cost. But faster internet links, stronger servers, better computers, smarter games, higher awareness of gaming champs, and game-streaming websites like Twitch have more or less shifted the phenomenon online.

In video game arcades of the early 1990s, back when Pac-Man and Donkey Kong reigned over joysticks, gaggles of adolescents gathered around the screens of video game junkies as they emptied their last coins into what now seem like ancient machines. The same concept still exists, but the rankings are global and available to the entire world. As a result, there are now teams, tournaments, sponsors and fans. Gaming has turned into an online spectator sport.

While e-sports in India is still at a nascent stage in comparison with countries like South Korea, structured formats have emerged here as well. There are now round-the-clock national tournaments with large sums as cash prize, professional teams with managers, sponsors, players who command salaries, contracts that ensure players aren’t poached by rival teams on the eve of a tournament, and fans who seek out their favourite players at large LAN (local area network) contests. “In the past, there would be one tournament in several months. There were some good teams, but after some time they would simply disband and disappear. But now, especially since this year, there are actually several tournaments. And gamers have to choose between them,” says Anup Dustakar, head of operations at Nodwin Gaming, which manages and hosts gaming activities within India. “As a result, you now see these professionally-managed teams.”

A few weeks ago, two top professional e-sport teams in India, Invisible Wings and Beyond Infinity, both of whom excel in Defense of the Ancients 2 (DOTA-2) and Counter Strike: Global Offensive (CSGO), merged to form Entity Esports. The owners expect it to compete both in top national and international e-sports contests. The owners also plan to hold national tournaments, and, if the popularity of the team increases, they hope to sell team merchandise as well.

Most of us weren’t great as students or professionals. All we were ever good at were video games

As of now, a total of 26 players, all of whom are paid salaries under contracts, live and train in two gaming camps: one is a house in Mumbai’s Santacruz area and the other is in Thane. There are housekeepers in both houses who look after the players, physical trainers who take the players out to the gym, a game-coach who oversees the performance of the players, and a team manager who shuffles between the two houses and liaisons between the owners and teams. Both houses have a strict training regimen. The players have to be up by 7 am, and after a workout in the gym, they have to practise together from 9 am to 1 pm, and then again from 2 pm to 4 pm. They then play from 6 pm onwards, but as a rule, never beyond 11 pm. In their breaks, they are encouraged to go out. “We think it’s a wrong approach for gamers to be up all night and day playing games. If you want to compete with the best, you need structure; you need training with breaks and exercises,” says Siddharth Joshi, team manager of Entity Esports.

Shivansh Srivastava, one of the co-founders of the team, who is also one of the founders of Tranzeneca, a company which organises e-sport tournaments and runs a gaming café in Pune, says, “We’ve realised that to run a professional team, you need to pay players salaries and take a more organised approach.” The two teams, which often found themselves occupying the first and second ranks in India, have been merged into one, he explains, so that they achieve the skills needed to compete with teams abroad.

Most players at Entity Esports are in their early twenties and have either just finished their education and are taking a break before finding a job, or have dropped out of college to pursue e-sports. Player salaries in the gaming industry, according to players and team owners, range between Rs 20,000 and Rs 50,000 per month in India. “The families of most players aren’t thrilled at their children choosing gaming over some other career,” Joshi says. “But most of these players aren’t good at studies or anything else. They are basically saying ‘Let’s try out what we’re good at.’”

Raunak Sen, known to gamers at large as Crowley, a 20-year-old player who specialises at DOTA-2, spent two years moving from one team to another, depending on the salaries and opportunities these teams provided, until he signed up for Invisible Wings and now Entity Esports. Having played games from Class 3 onwards, after his higher secondary exams about four years ago, he opted out of college to pursue a career in e-sports. “My parents weren’t happy. They wanted me to pursue a Management degree and didn’t understand how I could make a career as a game player,” he says. Since then, he has been playing for a variety of teams. He now lives in the Santacruz game house of Entity Esports and drops by his home to meet his parents now and then. He says he makes enough money to sustain himself for now. If the gaming scene develops further and remuneration and prize money increases, as he hopes, and his team makes a mark overseas, he believes he might be able to make a career out of it. “For the next two years or so, I’m happy here [playing for Entity Esports]. After that, it depends on how we do, and I’ll see if this can be like a career.”

It’s a wrong approach to be up all night and day playing games. If you want to compete with the best, you need structure

In 2008, after becoming part of an e-sports team of friends called Team Wolf, Panth formed a team called Brutality. Since then, they have competed in several tournaments, becoming one of the top CSGO teams in India. Before every major contest of skills, they rent a place and set up what they call a ‘bootcamp’ for a month or more. They are currently looking for a place to rent for the entire year. Here, they train through the day and night, from 11 am to 3 am, with only a few breaks in between. They sit together and discuss strategies, they re-watch old matches and follow other top teams’ game-play,. “We play together, we chill together. We have all been friends and been playing together for five or six years, which helps us get that extra edge over our opponents,” Panth says.

The team currently has several sponsors, including a chain of gaming cafes and a gaming eyewear marketer, from which the team earns Rs 2.8 lakh to Rs 3 lakh every quarter. Whatever the team wins at tournaments is shared among them. Their contest matches usually garner between 3,000 and 4,000 viewers online. With a fan base to their credit, they have begun selling team jerseys and gaming mouse-pads with their logo.

OBSERVERS SAY THAT the gaming scene in India has taken off this year, with several well-known companies organising games and famous competitions coming to the country. Flipkart held an online gaming competition earlier this year. Also held recently was the Taiwan Excellence Gaming Cup, organised by the Taiwan External Trade Development Council, a state-sponsored trade promotion body, with a total cash prize of Rs 5 lakh. Earlier this year, the Indian Gaming League, an e-sports platform that organises online and offline tournaments, also joined the action. And from this year onwards, Electronic Sports League, one of the world’s top e-sport companies and contest holder, in collaboration with Nodwin Gaming, have begun conducting a year-long e-sports championship, the ESL India Premiership, with a total of Rs 42 lakh in cash to be won.

According to Mayekar, who manages team Brutality and works with Express Interactive Software, this sudden excitement is a result of the industry’s rapid growth. “There are so many players and fans who will buy new games, consume gaming merchandise. And several companies have finally begun to realise that.”

Apart from the displeasure they often cause their families for not pursuing careers considered serious, gamers also live in fear of coming across angry parents of children who follow their performance online. A few months ago, Panth was with his mother at a dosa stall in a Mumbai suburb when a kid accosted him. “He came up to us and asked me if I was ‘V3nom’ (his game nickname) from Brutality. When I said ‘yes’, he introduced me to his grandmother. I was really expecting her to launch into me, to tell me how I was a bum and corrupting her grandson. But she just congratulated me and kept smiling. ‘Wow,’ I said to myself, I didn’t even get a scolding.