Nothing Left To Say But Goodbye 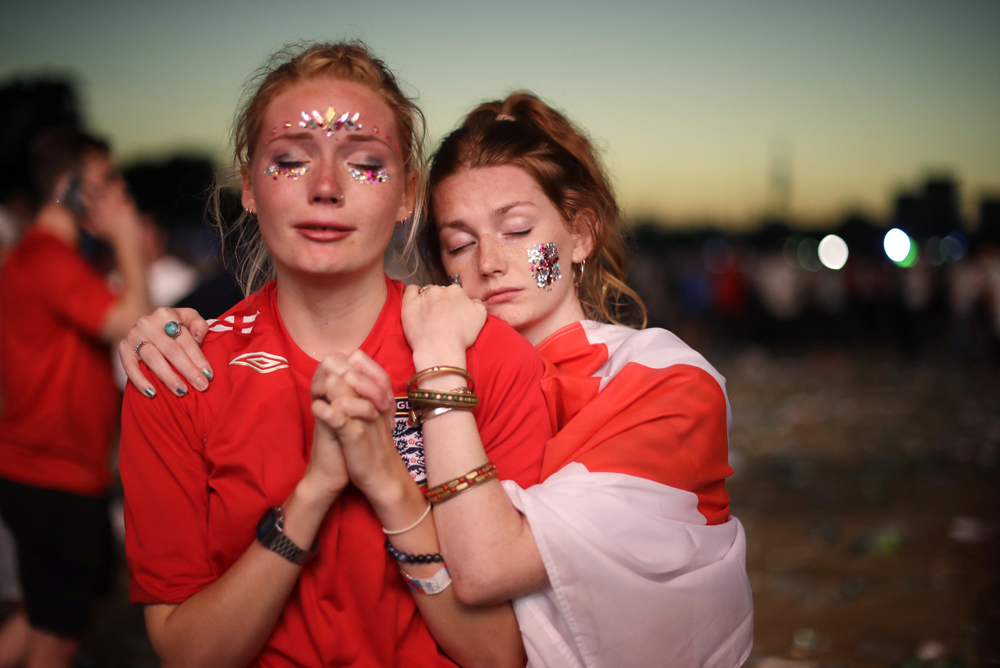 They aren’t all insufferable. Arthur, the burly and bald gentleman, in a waistcoat and Gareth Southgate mask, who I am shoulder-pressed against at the FIFA fan-fest in St. Petersburg, is being consoled by his missus after Mario Mandzukic’s extra-time goal for Croatia against England in the semi-final. But despair fast turns to disgust when Arthur, like the rest of us in the front-quarter of the big-screen viewing area, notices four men with the St. George’s Cross painted on their faces hoisting eight middle fingers in the air, frothing at the celebrating Croatians. “Degenerates,” says Arthur, shaking his head, paper mask seated on his skull. “And we wonder why we aren’t liked all that much.”

The painted-faces are stood a few, densely-packed rows ahead of us. But we can hear them clear as the setting night. The chant is unprintable and not very clever, one foul word repeated over and over again. But it stains the air, like a blot of ink spreading through the pocket of an otherwise pristine shirt. Every football team — country or club — suffers due to the bad apples present in its fan-base. But in England’s case, the rotten ones have been more visible (and audible), seemingly enough to define the entire cart.

“I don’t know what’s more annoying – England’s team, media or fans,” says Jason, an American wearing Farfan’s Peru jersey. I laugh, mainly because I had once heard (and wholeheartedly agreed with) similar words spoken about the Indian cricket team at cricket World Cups, us in the media, the travelling Indian fans (‘armies’, they call themselves) and how the whole lot gets blindsided by its passion every four years. One, however, can choose not to watch the matches and leave the newspapers unread. But if you are at a football World Cup, bumping into England supporters is unavoidable.

Unavoidable, even when the Three Lions are due to play in a different city. One of the many buses transporting ticket-holders from Kazan Arena back to the city-centre, after the Belgium-Brazil quarterfinal, broke down a couple of kilometres short of its final destination. There were groans all around once we found out that the transport system is stretched to its limit and no back-up bus will be coming to fetch us. And almost all passengers poured out of the pneumatic doors in silence. Except two men wrapped in England flags, one of whom yelled, in the general direction of the bus driver: “Shit countries shouldn’t host World Cups.”

It must be stated, again, that the rotten ones aren’t representative of a nation. But try telling that to the 100-odd Russians and Belgians and Brazilians who were privy to the moment. Or the 10,000-odd tourists on Red Square in Moscow, who watched a gang of English fans sing ’10 German Bombers’ while holding air-inflated RAF models in their hands.

The entire England team, led by Harry Kane, and a majority of their travelling fans, however, took quite a shining to Russia during a campaign that was 20 minutes away from reaching its first World Cup final since 1966, where they played and won at home. And the Russians loved them right back. Most of the locals at the fan-fest in St. Petersburg (especially Russian teens) were backing the Three Lions, nearly causing a stampede when Kieran Trippier’s brilliant freekick in the fifth minute of the semi-final gave England the lead.

There was a freshness to this team seldom seen in previous England sides – especially compared to the ones that competed in the last two majors, the European Championships in France and the previous World Cup in Brazil. Powered by an all-Tottenham engine (Kane, Trippier, Dele Alli, Eric Dier, Danny Rose and former Spurs defender Kyle Walker) and Southgate’s strategies (the critics will tell you that a favourable draw played its role as well), England made it further than they ever had in 28 years.

At half-time, with England’s hopes of making the final still intact, the men with red crosses on their faces at the fan-fest broke into a song whose chorus has gotten under the skins of millions on social media. The song is ‘Three Lions (Football’s Coming Home)’, whose patronising hook takes much pride in telling the world that they invented yet another sport that others have been more successful at — ‘It’s coming home’. They sang it at full-time and, again, in the interval between the two halves of extra-time. When the match ended, moments after Madzukic’s winner, a Russian man spotted Arthur’s Southgate coat, walked up to him and said: “The World Cup is in my home, in Russia.”