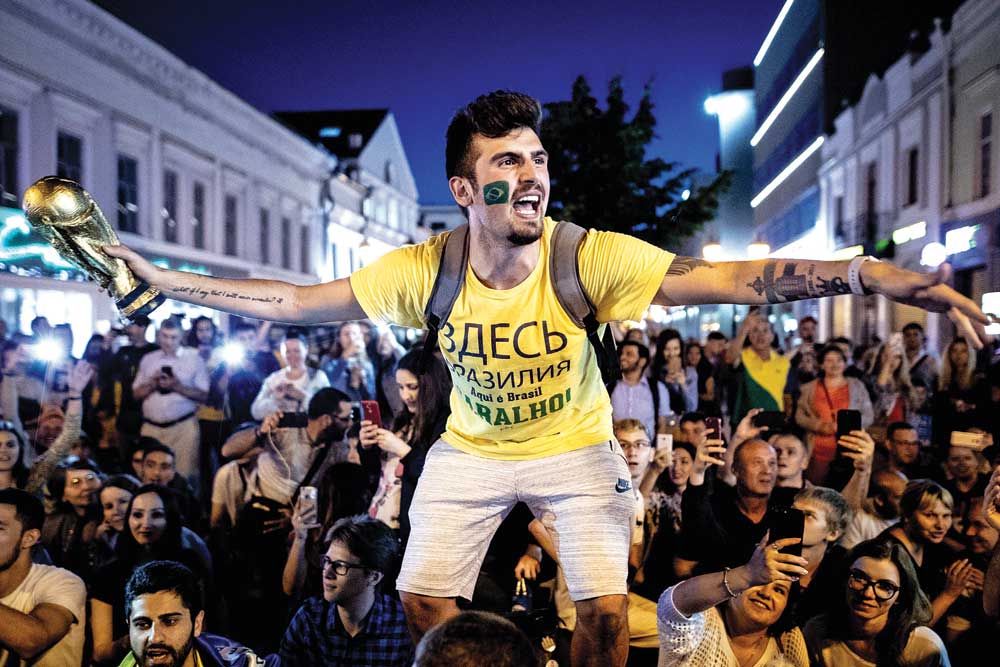 THE PRAM WON’T climb the kerb, despite her best efforts. The front wheels are on the street, wedged in the grooves of a gutter lid. And no yanking attempt by the mother—slight in build and burdened with a handbag on one shoulder—is strong enough to lift the hind wheels high enough to find a hold at the top of the pavement. The infants, twins, are bawling. Exasperated, the mother sighs. She holds the handle of the tilting and immobile pram with one hand and adjusts her bag and headscarf in quick succession with the other. She looks both ways for help. But the hour is late, 3 am; a sleepy weekend morning in sleepy, small-town Russia.

Two Brazilians, on their haunches, are jiggling the pram to loosen the alloy wheels from the gutter’s grooves. Three more Brazilians are on standby, plastic beer glasses in hand. One Russian policeman and another man from Belgium (wearing a cap with yellow horns) have taken over the handle, waiting for the wheels to be freed by the Brazilians. For kerb-side reinforcement, two more cops wait, hands in pockets. The infants have gone quiet, their faces frozen mid-bawl as four men haul them up by their seats and place the pram on the pavement.

The policeman returns the handle to the smiling mother, who adjusts the bag to the top of her shoulder and rolls the pram into a pulsating crowd, weaving her wide-eyed children through vivid colours and sounds. The Brazilians and Belgians get back to their respective groups, glasses and conversations. The Russian police retake their position, backs to the wall of a store front, watching thousands of strangers bring their out-of-the-way town to life for one final night during this World Cup.

A few hours ago, Kazan finished hosting its final football match of this tournament, the quarterfinal game between Brazil and Belgium. And in a few hours, the last of the tourists who had the pleasure of experiencing the Russia beyond Moscow and St Petersburg will board trains back to whence they came, Moscow and St Petersburg—where the World Cup will reach its climax. But the hour, 3 am, is still too early for goodbyes; and a grateful small town in Russia is awake and prolonging the fall of the curtain.

We’re on Bauman Street, otherwise a lonely, bohemian road that connects Kazan’s Kremlin in the north to the old Tatar settlement towards the south. On its busiest holiday-weekends before the World Cup came to town, Bauman Street would max out with 300 visitors, all of them Muslim pilgrims from around Russia who arrived in Kazan to pay obeisance to Qolsärif, the largest mosque in Europe outside Istanbul. Like every other night of this World Cup, Bauman Street is currently brimming, vibrating and radiating with many thousand delirious men and women. Yet, this night seems a shade more special than the other exhilarating ones that preceded it. Tonight, the locals have joined the revelry, all of Kazan, ostensibly, having poured out of homes and on to this slim road, aware that these aliens aren’t going to visit again.

Azat and his wife, both in their eighties, are seated on a bench outside a coffee shop on the corner of Bauman and the road leading up to Kazan’s railway station. He is holding up a placard which reads, in Tatar: ‘My name is Azat. Thank you for coming to Kazan. Return soon’. The passing Belgians and Brazilians cannot understand the message, of course, but they return his smile, thanking him back. Spasibo, they say. Azat grins, exposing his denture-less gums. His wife waves one palm, the other gripping the walker placed beside her.

With the help of a local FIFA volunteer (their work was done at 11 pm when the match ended, but are still around in numbers), I ask Azat what this World Cup meant to him. “This is the happiest I have seen this city,” he says. His wife then whispers into the volunteer’s ear. “Today she found out Kazan’s campaign is over. So she is very sad,” the volunteer tells me. “She wants this World Cup to come back to Russia every year.” The volunteer doesn’t have the heart to correct her.

Down the road, in a hole-in-the-wall pub, Andrei is pouring 200 ml of liquor every time a customer pays for a 50-ml shot. After a while, he stops accepting money. With another generous tilt of his bottle, he fills half my beer cup with vodka. “Do you get vodka back in India?” Andrei asks. But before I can reply, he has moved on, pouring away the contents of the bottle into the glasses of customers on adjacent bar stools.

My neighbour at the pub is Sergei, a 20-something man from Ekaterinburg, a city located at the base of the Ural Range that neatly divides the European and Asian sides of Russia. And the middle-aged man next to Sergei is his father, Sergei Sr. He says that this is the first time either of them has travelled to another small town in Russia. “I thought every Russian city that isn’t Moscow or St Petersburg will be exactly like Ekaterinburg, with some small changes in the weather,” the younger Sergei says, shrugging his shoulders. “I was right in one way. The people here in Tatarstan are just as welcoming of strangers as we are back home.”

Sergei was in Ekaterinburg when it hosted its final match of the World Cup, during the group stages. He claims that for a few days after the Sweden-Mexico match ended on June 27th at the Yekaterinburg Arena, the city felt lonely and deserted. “I can see the same look on the people here that I saw back home when our part of the World Cup came to an end,” he says. “My friends and I visited Vainera Street and all the other downtown squares in Ekaterinburg where just the previous night there were open-air parties. It was the silence that was hard to digest.”

KAZAN IS THE capital city of Tatarstan, a federal republic that, despite being situated in the landlocked heart of western Russia, is different from its neighbouring states on two significant fronts. The majority in Kazan speak Tatar and follow Islam, not Russian and Orthodox Christianity, respectively. The city is old, very old— in 2005, it celebrated its 1,000th year—with its oldest monument, the Söyembikä Tower, dating back to Ivan the Terrible’s reign in the early 16th century. Yet, Kazan’s only ‘tourists’ are members of parliament, here on work at the Kazan Kremlin, and Muslim pilgrims.

Though Kazan celebrated 1,000 years of existence in 2005, its tourists were a trickle more than a flow before the World Cup

So, when about 20,000 French and Australian fans flooded Kazan’s streets on the first weekend of the World Cup, it came as a bit of a culture shock to the locals. “As a city, we were prepared for the arrival of foreigners once the tournament began,” says Ilyas, a student in Kazan whose phone is filled with selfies of him with people from different countries. “But nothing could have prepared us for so many foreigners at the same time. I mean we don’t meet too many Russians from Moscow and St Petersburg. And then suddenly we had Australians walking around in shorts and slippers everywhere we looked.”

In the space of just three weeks, Kazan’s hotels and fan parks hosted Iranians, Spaniards, Poles, Colombians, South Koreans, Germans and now Belgians and Brazilians—and these were simply those who followed their teams to this city. “Each of those groups gave us a taste of a different culture, of a different country,” says Ilyas. “We Tatars don’t travel all that much. Most of us spend our entire lives in Kazan, seldom travelling to even Moscow and St Petersburg. But after this World Cup, I will say, ‘So what if I haven’t gone anywhere, I have still seen people from all over the world’.”

Tatars may not travel the world. But the world travelled to their doorstep in Kazan—precisely the reason Russia’s President Vladimir Putin is said to have bid for this World Cup a decade ago. To show fellow Russians that they—from Kazan or Kaliningrad, Saransk or Samara—are important enough to have in their backyard visitors from around the globe. Sasha Goryunov, a leading Russian journalist, looked at the world travelling to small-town Russia through a starkly different prism than Putin. On David Goldblatt’s podcast, Game Of Our Lives, he was asked: “We know about the bad stuff. What’s the best stuff that’s going to be on offer in Russia?”

Goryunov replied: “People don’t realise… 30 years after the fall of the Wall, [Russian] people don’t get out that much. So to get, say, thousands of random Mexicans descending on their city in the middle of Russia, they’d be delighted. They will make (visitors) feel very welcome.” And welcomed, we all were. Andrei, the owner-cum-bartender at the pub on Bauman Street, tells me that he hosted three Argentines at his place, free of cost. “They didn’t have any hotel reservations—every BnB in Kazan was booked before the Argentina-France game,” says Andrei, pouring more vodka into my glass. “So when they asked me where I could stay, I told them they could sleep in my living room.”

The constant hum of noise outside the pub peaks with high- pitched shrieks. It must’ve been 5 am; or maybe even 6—we’re all too inebriated to know. Everyone from the bar, including Andrei, darts out and notices a Brazilian fan riding a bicycle. Only, and this had little to do with our blurred vision, the bicycle is about 10 feet high, high enough for the rider to high-five those looking out of the first-floor windows on either side of the road. As I watch him take circles around the road, I am joined by a streetwalker who doesn’t once solicit my custom, nor tell me her name.

“All this freedom, this ends in a few hours,” she says, pointing at the crazy cyclist first and then the cops standing nearby, who are doing a shoddy job at pretending not to look at her. “Once the last of you are gone, it will be life as it once was, normal. They (eyeing the cops) will be back to harassing people like me.” She’s from Ulyanovsk, a satellite-town so small that Kazan is the place she always aspired to be in. As she tells me about life in Ulyanovsk, we are approached by three men, all Russians. One of them waves a wad of roubles at her. Another whispers into her ear. She nods her head and walks away. The men feign disappointment.

The one with the cash is now smiling. “How do you like Kazan?” he asks me, still flipping the wad in his hand. I tell him that from the little I’ve seen, he lives in a great city. “I’m not from Kazan. We’re not from Kazan,” he says, gathering his friends. “We’re from Moscow, the city where everyone is sad. So when we want to smile, we come here to Kazan, where everyone is happy.” He looks around, at the drinking Brazilians and Belgians and the locals watching the drinking Brazilians and Belgians, and shrugs. “But today, today for the first time, I have seen the people of Kazan looking sad. Very sad.” To emphasise his point, he makes a ‘U’ with his thumb and index finger and points the digits towards the cobbled road.