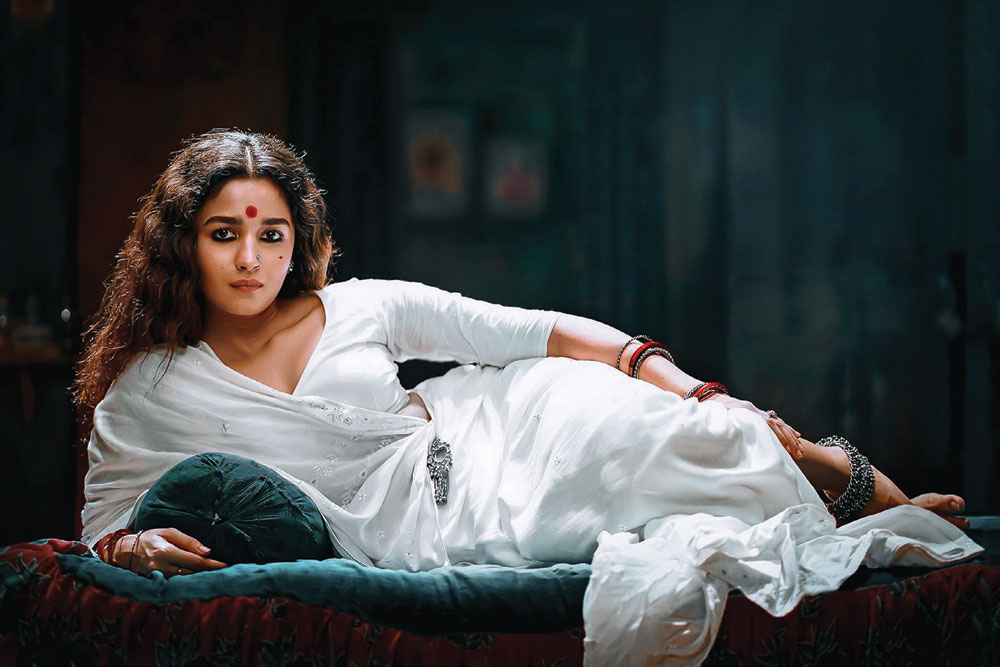 
THERE IS A scene in the recently released Gangubai Kathiawadi where the women of the brothel come to young Gangu (played by Alia Bhatt) with a white saree, saying from now on she will not sleep with any customer. The white signifies purity, chastity, and virginity, implying that their work is dirty, unclean and impure. In one fell swoop, director Sanjay Leela Bhansali undoes decades of work done culturally and socially to make sex work respectable, ironically the very thing the real Gangubai fought long and hard for.

Make no mistake. There is enough rhetoric in Gangubai Kathiawadi about how sex work is like any other profession. After she wins an election that makes her president of the Kamathipura ward in Mumbai, Gangu enunciates the three principles of sex work: the dishonest work should be done with honesty, the customer should get full satisfaction, and life should be lived with izzat (honour). But in reality Bhansali’s film violates all the principles, taking us back to the binary of heroine/vamp, good girl/bad girl, girl next door/prostitute.

It also undoes all the good work done by movies such as Sudhir Mishra’s Chameli (2003) and Anurag Kashyap’s Dev.D (2009), where prostitution is seen less as exploitation and more as a choice. It is no accident that both women play­ing the characters, Kareena Kapoor and Kalki Koechlin, are fair or white, height­ening the contrast between the work they’re doing and their perceived beauty. Bhansali plays on the same paradox of the virgin/vamp when his Gangubai is played by the mixed-race beauty Alia Bhatt, whose skin colour stands in stark contrast to the rest of the women in the brothel. In a particularly terrifying scene Gangubai’s un­marked, pristine skin is marred by a series of assaults on her, even as the languorously ugly madame, played with louche charm by Seema Pahwa offers fake sympathy. The sight of the madame’s destroyed face, coars­ened by age, contrasted with Bhatt’s brutalised beauty is painful and elicits a collective intake of breath by the entire theatre.


This brutalisation is meant to show us how vile the business of sex work is. White is a leitmotif in the movie. At one point in the movie, Gangubai tells her tailor/lover of the many shades of white there are—the white of the moon, clouds, paper, rose, barfi, salt, milk, the conch shell. The tailor chooses the white of the swan instead, those docile creatures of the lake. Dhanda (business) is dharam (religion) for Gangubai, greater than anything else in her life. “Agar per nahin phailaoge to hath phalaine padenge (If you don’t spread your legs, you will have to beg),” says a character in the movie.

IN SPIRIT IT seems to be similar to movies about sex workers in the past. But it does not have the una­bashed arrogance about it as Shyam Benegal’s Mandi (1983), which was briefly banned by the Central Board of Film Certification for the promo­tion of prostitution. “The CBFC felt the women were not apologetic about their work,” says Benegal to me on the phone from Mumbai. The filmmaker, now 87, had to write to the prime min­ister for it to be finally cleared. When it was finally released, columnist Sunil Sethi wrote about it, saying: “It’s the first time an Indian movie cuts out the sticky-cheap drivel about courtesans and kothas and shows it as it really is: garish and seedy, reckless and heart­less, make believe and hard to believe.”

Gangubai Kathiawadi undoes all the good work done by movies such as Sudhir Mishra’s Chameli (2003) and Anurag Kashyap’s Dev.D (2009), where prostitution is seen less as exploitation and more as a choice

But at the heart of it was the same dilemma, which runs through Gangubai. Society’s attempts to rid itself of its “filth”. As in Gangubai, so in Mandi, the quarrel is over land. A real estate developer promises Gangubai and her ally Rahim Lala (Ajay Devgn) a flat each in exchange for their eviction from Kamathipura. “Jiska aasmaan pura ho, usko choohe ke bil ka lalach de rahe ho (You are trying to woo us with ratholes of flats, we, who are so accustomed to live expansively),” says Rahim Bhai to the real estate developer.

In Mandi too, Shabana Azmi’s brothel is removed twice. Each time though customers make their way to the new brothel and create a new town around it. “Historically that is what happened,” says Benegal, pointing out how the red-light district came up in Old Hyderabad around Charminar when members of a substantial harem of the last Nizam, Mir Osman Ali Khan, fell out of favour. They had to move out of the Chowmahalla Palace of Hyderabad and start living in the town. They fell into the flesh trade.

The courtesan trope is well estab­lished in Hindi cinema, with the films Pakeezah (1972) and Umrao Jaan (1981) being the epitome of that tradition. Its slow death, as the connoisseurs died, leaving only the pleasure of the body, not its performance, was captured quite beautifully in Kalank (2019) in the character of Bahaar Begum, played with grace by Madhuri Dixit. Shibani Bathija, who wrote the story of the film, says Bahaar Begum was her trib­ute to the “old days” when the kothas were centres of art. “The finest expo­nents of dance and music performed there. And these were very separate people to the ‘prostitutes’. They some­times were ‘maintained’ by a patron. But on an exclusive basis. This ‘artist’ was who Bahaar was to me.”

There are echoes of this in the terrifying but liberating last scene in Rajinder Singh Bedi’s Dastak (1970) where a typical ‘seth’ comes to a courtesan’s old haunt, now occupied by a young couple where the wife has a love for music and is mistaken for a singing girl.

More recently, in Sudhir Mishra’s Chameli, Kareena Kapoor goes against her fashionista image to play a Mumbai prostitute, legs akimbo, ciga­rette between lips and a full-throated laugh as her trademark. She was seen as a woman with a life of her own, an entire ecosystem around her, includ­ing an orphan whose studies she paid for. A chance meeting with an uptight investment banker on a rainy Mum­bai night and she tells him that her life is a lie, without any self-flagellation.

Chanda, played by Kalki Koechlin, the sex worker in Dev.D is even less wor­ried about what society thinks, having been psychologically brutalised by the scandal around a sex video she was in. She has none of Chandramukhi’s pa­thos (from Sarat Chandra’s Devdas): “Ta­waifon ki to takdeer hi nahin hoti (Prosti­tutes have no destiny),” Chandramukhi says to a taunt: “Tawaifon ki takdeer main shohar nahin hote (Prostitutes are not destined to have husbands).”

It echoes what another famous sex worker in Hindi cinema says to her hero (Amitabh Bachchan) in Deewaar (1975). As Anita, played by Parveen Babi, dies in her hero’s arms, she says tearfully: “I have been dead for a long time. I am being reborn today.” It’s a far cry from the confident Anita who approaches Vijay for the first time, in a shimmering dress, cigarette and drink in hand: “I was waiting for an opportunity to talk to you. There is no one as handsome as you in this bar, nor anyone as lonely.” Naturally, she cannot live for long.

At the heart of Mandi (1983) was the same dilemma, which runs through Gangubai Kathiawadi. Society’s attempts to rid itself of its ‘filth’. In both, the quarrel is over land

There is none of that self-pity in Kareena Kapoor’s Simran/Rosie, a sex worker in Talaash (2012), where (spoiler alert) her ghost ends up help­ing Aamir Khan playing the role of a police officer to solve a crime. Talaash gives the sex workers the kind of inner life Salaam Bombay! (1988) did so beau­tifully, with the relationship between Sola Saal (Chanda Sharma) and the tea boy, showing the little cruelties and the little tenderness that is possible. But it is also about how little the sex workers’ lives are worth.

As Rosie says in Talaash, “A woman vanishes and no one cares to find out what happened to her for three years.” Reema Kagti, who directed and co-wrote the film with Zoya Akhtar says, “Rosie is unapologetic about her profession. She is Zoya and my testimony to the fact that 20 million sex workers exist.”

That is one of the demands the real and reel Gangubai makes of Prime Minister Jawaharlal Nehru in the film, asking for legalisation of sex work only to hear a firm no. The Nehrus figure in the back story of Mandi too. The film was based on a classic Urdu short story Aanandi by writer Ghulam Abbas, which told of a true incident relating to Allahabad of the 1920s. Benegal was told the story by noted Sindhi writer Amritlal Nagar at whose haveli, ironically situated in the heart of the then red-light district of Luc­know, he shot Junoon (1978). The story goes that as a young lawyer Motilal Nehru was often questioned about living in Meerganj, a notorious red-light area of Allahabad, and he would shrug it away saying everyone had an equal right to existence.

Whenever it’s a matter of land, the most vulnerable and the weakest are the first to be kicked out, points out Benegal. Something similar has hap­pened to the real Kamathipura (and not Bhansali’s Art Deco version). The resettlement of the sex workers’ quarters has caused the flesh trade to disperse. Most of the buildings are across 39 acres and over 100 years old. There are 700 buildings and chawls with approximately 5,000 tenants. In 1992, the Brihanmumbai Municipal Corporation recorded there were 45,000 sex workers, which reduced to 1,600 in 2009 and 500 in 2018.

When the missionary school in the neighbourhood protests against the brothels in Kamathipura, Alia Bhatt’s Gangubai points out the brothels have been there for 100 years and the school is merely 40 years old. Yet it’s the women who’ve got to leave.

But in real and reel life, where they go, the men follow.