It is the third day in the union territory of Jammu and Kashmir, and thousands of migrant labourers from Bihar are fleeing the Valley after facing threats from local Kashmiris 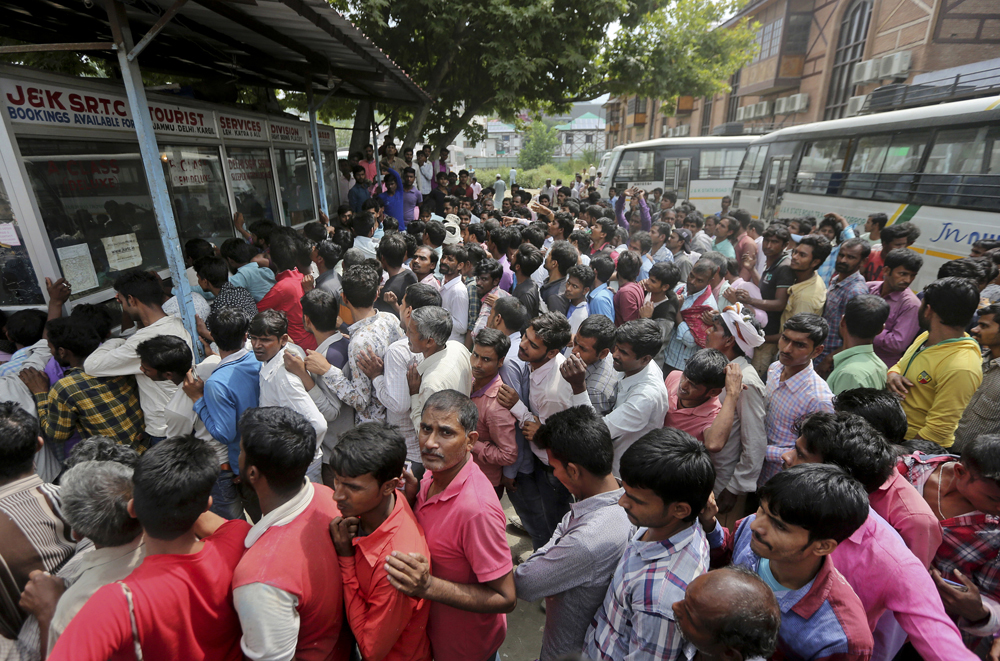 
Outside the Tourist Reception Centre in Srinagar, 56-year-old Surinder Mahato desperately waits for a bus to take him to Jammu from where he will have to make a long journey to his village in Motihari, Bihar. Clutching Rs 462 in his hand, the bus fare between Srinagar and Jammu, he has been told that the bus service will resume later in the day.

It is the third day in the union territory of Jammu and Kashmir, and thousands of migrant labourers from Bihar are fleeing Kashmir Valley after facing threats from local Kashmiris. The previous night a few of them landed up at Mahato’s room and asked him to leave. “They were hurling abuses at me and asked me to leave; they said they will kill me otherwise,” he said. On August 7, till 11.15 am, 40 buses had already left for Jammu. On August 6 also, thousands of them left for Jammu. In the absence of transport, many of them had to walk for hours to reach the railway station on the outskirts of Srinagar.


Mahato has been coming to Kashmir for 25 years. Most migrants like Mahato works as daily-wage labourers here. They prefer Kashmir because of its cooler summer-time climate. On an average they earn between Rs 500-600 per day. “If I work in Punjab, I am able to save less and send about eight thousand rupees per month. From Kashmir I can send almost double that amount,” says Abdul Ghaffar, a labourer from Bihar’s Supaul district. He doesn’t know if he can return to Kashmir now. He claimed that from Supaul alone, about one lakh labourers have been coming to Kashmir every year to work.

Several migrants who were waiting for the bus said their payments were stuck and they had to leave without their wages. On August 6, 25-year-old Aslam, another labourer from Bihar, was beaten up by a few locals in the HMT area in Srinagar. “They took away my bag and said: Bhaago Bihari idhar se (Run away from here, Bihari),” he said. His employer owes him several thousand rupees as wages. But scared about their safety, Aslam and many of his other friends chose to leave without collecting their earnings. Anil, another migrant labourer, said he was threatened as well. “One Kashmiri came to me the previous night and said if I see you tomorrow, I will beat you up and burn you with kerosene oil,” he said. Chote Lal, who was trying to return to Gorakhpur in Uttar Pradesh said some people threw stones on their dwelling and threatened him and others to run away, failing which they will be cut into pieces.

As they waited for their turn, two Kashmiris stopped to hear them speak. One of them looked at the labourers and shouted: “Sabka saath, sabka vikaas.”