Today we do not know if we are eating food, or if the food we eat is, in fact, eating us 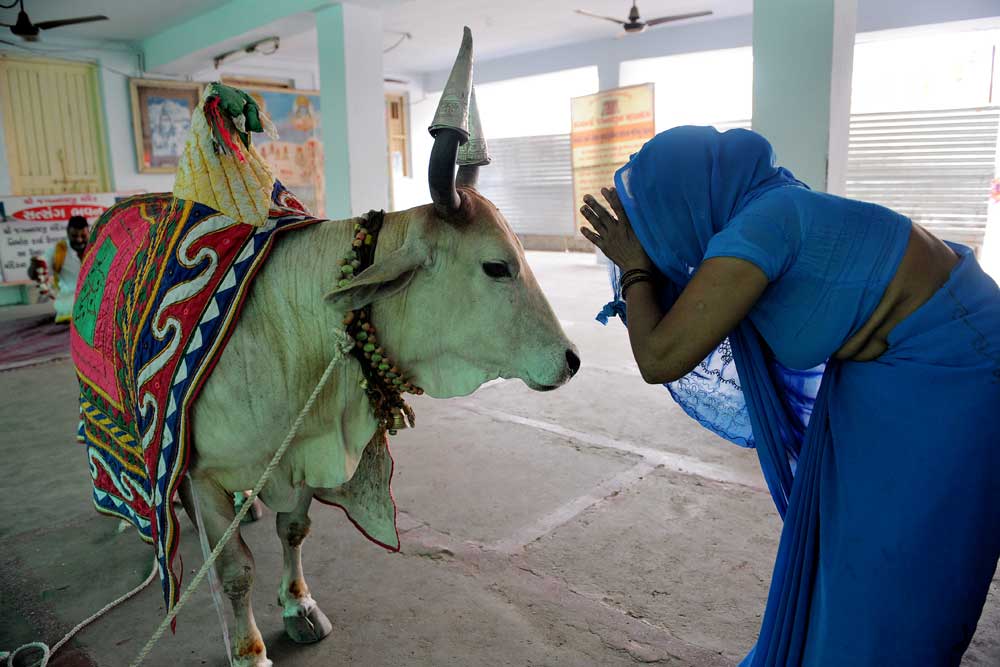 It comes as no surprise that Mohan Bhagwat wants an all-India law for cow protection. It could, however, surprise Bhagwat that cow worship is not alien to the Bible. The book of Exodus records that Aaron, the brother of Moses, asked by the Jews migrating from Egypt to Canaan to give them a god, forged a golden calf for them.

There was a cultural logic for this. The Jews were in bondage for nearly five centuries in Egypt, where – this will surely surprise Bhagwat – the cow was worshipped as a goddess known as Hathor. All other gods were supposed to have originated in her. The depiction of Hathor as a cow could have influenced Aaron’s imagination. Instances like this make us wonder, as it did European philosophers on religion Ludwig Feuerbach in the 19th century, whether it is God who makes man, or man who makes God in shapes he chooses.

Ancient Egyptians, according to Voltaire worshipped the cow, as Russians at the time of Peter the Great during the 18th century worshipped goatskin, because of the economic importance of cows in their society. Russians, writes Voltaire in The History of Peter the Great, used to ‘adore the skin of a sheep, because this creature is, of all others, the most serviceable to them.’

So, Mohan Bhagwat is in illustrious and international company, even if his demand may lack universal sanction. There is, however, a catch. Though Egyptians imaged their principal goddess in the form, or with the attributes, of a cow they did not make a fuss about anyone eating beef. The consumption of beef continued unhindered. Today, mutton and beef are on the same level of acceptance in Egypt.

We are familiar with Amy Chua’s controversial book on parenting titled, The Battle Hymn of the Tiger Mother (2011). The tiger was the totem of the Chinese clan from which she hailed. This tigress’ narrative reveals how an aggressive approach to parenting nearly destroyed two daughters. Readers would recall Emile Durkheim’s Elementary Forms of Religious Life (1912). He provides innumerable instances of tribes and clans worshipping their gods as identified with animals, birds, or plants.

But, this also weakens Bhagwat’s case, for none of the tribes or clans coerced others to respect or be governed by its totem. Rather, the contrary. Each clan kept its totem exclusive to itself and could not be claimed by others. Mohan Bhagwat’s advocacy of pan-India cow-protection legislation goes contrary to this logic. The RSS has to make up its mind if it wants the cow to be a Hindu religious symbol, or a marker of triumphalist majoritarianism. The latter option will take the cow out of the domain of god-formation. Will the cow be religious, agrarian or political?

The BJP too will have to think. Who will set its tone and traction: the RSS or Modi? Not long ago, Modi had stated categorically that the activities of cow vigilantes are incompatible with the rule of law. He cannot be unaware of the tension between his developmental pitch and the RSS cow-protection pull. He knows that India cannot progress by going backwards. Modi has hitched us to the digital chariot of modernity. He is preparing us to be reckoned and respected on the global stage. The two goals –cow triumphalism and a progressive society — do not gel.

Pan-India measures have an effect, intended or otherwise, of homogenization. It is common knowledge that, coincidentally, the Hindutva worldview sees diversity as inimical to national vitality, as Hitler does in Mein Kamf. In his autobiography, Hitler argues that a homogenous people can endure and remain intact during spells of adversity and maladministration. Only a homogenous people can preserve their ‘vitality’. But the situation is different, he warns, ‘in a country where the population is not homogenous, where there is no bond of common blood . . .’

Homogenization being the acknowledged bottom-line of the Hindutva vision for India, it is only to be expected that coercive cow-protection, armed with central legislation, is now, under propitious circumstances, positioned as a national imperative.

There could perhaps be yet another consideration that drives this agenda. We turn to Gandhi’s autobiography, The Story of My Experiments with Truth, for a clue.

Gandhi recounts how his elder brother tried to initiate him –a strict and instinctive vegetarian–into beef eating. What was his brother’s motive in organizing that clandestine ritual, repugnant to Gandhi’s personal and family culture? It was the notion prevalent then that consuming beef made a person stronger, braver and virile. This put those who did not eat beef at a disadvantage. So does banning beef help? There is nothing wrong with cow protection per se. I became a vegetarian some years ago and remained steadfast for five years. Then I hit a major hurdle: the poisoning of our vegetables with death-dealing chemicals. The alienation of cheap nutrients, via self-imposed or forced vegetarianism, needs to be compensated with the availability of safe and affordable vegetables, which is hardly the case today.

Killing an animal for its meat is not the only form of cruelty we perpetrate. Murderous human greed imperils everything today, from vegetables to infants. How can the cow alone be protected when all else is endangered? Today, we do not know if we are eating food, or if the food we eat is, in fact, eating us. This issue deserves to be seen as basic to cow protection.

Perhaps the core issue is this: to what extent can legislation legitimately intrude into and regulate the private life of citizens? What I eat pertains to my private life. But, I am not a lone individual, living by myself on an island. I live in a society surrounded with people who differ from me in tastes and sensitivities. So, if what I eat hurts the sentiments or offends the susceptibilities of my neighbours, I cannot insist that my tastes are a purely private matter.

But there is this other side as well. To what extent should the tastes and sensitivities of my neighbour restrict my freedom of choice? This question can be resolved in either of the two ways. The first is that of majoritarian triumphalism. It operates on ‘might is right’. In principle, the majority in a democratic polity has the right to impose its will on society as a whole.

The second option is to go with the principle that only what is universal shall be legislated, in matters of individual taste and choices, as binding on citizens. No discriminatory advocacy, even of the brute majority, should be allowed to prevail coercively on society as a whole. This is the road that modern societies take.

Law is coercive. With each new law, a sliver of freedom is sacrificed. Proliferation of laws progressively compromises personal freedom. So also does the absence of laws. The bandwidth of legislation must be indexed to preserve optimum freedom. If freedom is compromised, human spontaneity is jeopardized. So, totalitarian societies end up suppressing the creativity and cultural vitality of its members. Napoleon Bonaparte wanted France to be not only a military superpower but also an intellectually vibrant society. He tried to catalyze a cultural ferment. But the violence he had introduced into French society and into Europe as a whole frustrated his intent. France stayed intellectually and culturally pedestrian during and in the wake of its Napoleonic stint.

Perhaps Modi should regard Napoleon, who he uncannily resembles, more attentively. Like him, Napoleon was fiercely ambitious for his country. Like him, the emperor worked mighty hard to make France the nerve-centre of Europe. Like him, the Corsican was a man of incredible vitality. But history hoisted Napoleon on his own petard. The moral of the Napoleonic parable is clear and universal: violence does not pay. It kills what you espouse. Nothing, absolutely nothing, can condone violence.

But violence is like vintage wine when it rages. It intoxicates. It unfurls a panoply of heroism and induces illusions of being the centre of one’s world, entitled to disposing of at will the destiny of millions. Napoleon moved. Europe trembled. But that stirring saga ended, landing him in prison as a British prisoner of war in 1815. In an instant the dreaded, invincible conqueror lost all his authority. The pity is that few realize that they are de facto prisoners, even while strutting on the sprung stage of scintillating state power.