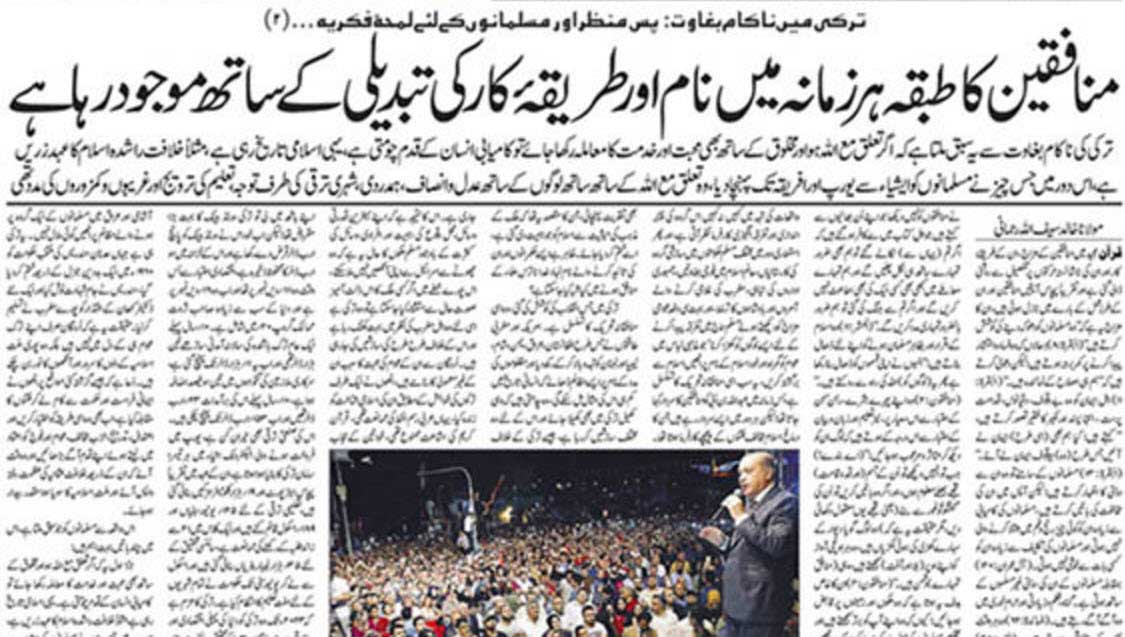 Democracies function through institutions. But people who love Islamists with little if any regard for democracy tend to find generous space in India’s Urdu press to air their views. The latest instance makes the malaise clear.

Turkey’s Islamist leader Tayyip Erdogan’s lack of respect for institutions was exposed soon after the country’s failed military coup of 15 July. Turkish teachers, judges, soldiers and police officers of a liberal secular persuasion were arrested, jailed and sacked from jobs in tens of thousands, and now they are being savaged as ‘munafiqeen’ (hypocrites) by Urdu commentators in India. (To Muslims, the word ‘munafiqeen’ has a religious connotation. Prophet Muhammad had demolished mosques built by them in Medina, a subject discussed in the Qur’an.)

In its issues dated 29 July and 5 August, Roznama Inquilab of the Mid-Day Group published a two-part article by Maulana Khalid Saifullah Rahmani, an Islamic cleric who inculcates Islamist, obscurantist and separatist ideas among Urdu-reading Indian Muslims. The article, especially the first part, offers to analyse the Turkish coup but heaps scorn on liberal, secular and reformist Muslims, describing them as ‘Islam’s enemy elements’ and ‘black sheep’ found among Muslims. Accusing the West, especially Christians and Jews, of breaking up the Ottoman Caliphate, he writes that these powers chose three groups including Islam’s ‘hidden enemies’ to divide Muslims. According to the author, three groups of munafiqeen are found in the following institutions: the military, which implements the Western agenda in Muslim nations; the judiciary, which ‘closes the door on the persecuted’ and legitimises Muslim rulers; and the media, which ‘peddles lies in such a way that they become truth’ and distorts incidents so that ‘religious sentiments found among Muslims do not rise up’ and the ‘lava of religious dignity and self-respect’ doesn’t flow out.

In the post-9/11 years, speaking in exactly the same idiom that Rahmani uses, the Taliban in Pakistan declared a jihad against the media, the judiciary and the military of that country, declaring Muslims working in those institutions as ‘apostates’ and therefore ‘wajib-ul-qatl’, eligible to be killed.

‘An important role is played by the black sheep [that is, liberal Muslims] who were inserted in the columns of Muslims and were used against Islam and Islam-loving groups [like the Muslim Brotherhood of Egypt, Hamas of Gaza and Justice and Development Party of Turkey],’ writes the cleric. Rationalising the mass purge of liberal Turkish citizens from government jobs, Rahmani notes: ‘These are the people who live in the columns of Muslims in the form of litterateurs, poets, teachers, government employees and social workers. And from among them, many people don a religious garb to work in the religious class.’

Rahmani’s analysis reaches back to the era of Prophet Muhammad, whose message of Islam was opposed publicly in Mecca by polytheists and in Medina by Jews and secretly by munafiqeen. He defines the latter: ‘Since the dominant population of Medina had converted to Islam, they did not have the courage to express their kufr [unbelief] and rejection, but from within they were not Muslims and they had hidden the enmity of Islam in their hearts.’ The Islamic cleric goes on to argue that many of the wars fought by the early Muslims were brought about by ‘unpious efforts of munafiqeen’ and not a day in the prophet’s life was without their machinations.

In the second part of the article, Rahmani uses Quranic teachings for his argument, writing: ‘Detailed light has been shed in the Qur’an on the temperament and working methodology of munafiqeen and their uncultured habits. And about 50 verses were revealed about [them] and their working methodology.’ He cites verses eight (incorrectly) and 11 from Chapter 2 of the Qur’an to argue: ‘They try to deceive Muslims’; ‘They claim, we are the reformers, but are ready to create conflict and division.’ The point about ‘deceiving’ Muslims is from Verse 9, not Verse 8, as Maulana Rahmani claims.

The author derides friendship between liberal Muslims (munafiqeen in his view) and non-Muslims, and cites Verse 62 of the Qur’an’s Al-Maeda chapter to argue the following: ‘Compared with Muslims, their friendship is more with non-Muslims. They are ahead into sins, aggression and devouring of illicit [goods].’ The point about not having friendship with non-Muslims is not in Verse 62, as Maulana Rahmani notes, but in Verse 51 which states: ‘O you who have believed, do not take the Jews and the Christians as friends…’

It might be necessary for Rahmani to cite correct verse numbers in his future articles. In an attempt to persuade devout followers of Islam to shun reformist Muslim writers, the cleric cites Verse 120 of Chapter Al-Imran, which says: ‘If good touches you, it distresses them; but if harm strikes you, they rejoice at it…’

Numerous Quranic verses are cited against liberal Muslims by the author, notably verse numbers 2:13, 9:48, 9:57, 9:107, 59:11, 63:2, 63:4 and 64:8. Having explained the characteristics of munafiqeen, Rahmani observes: ‘If you think over, people having these characteristics have always lived in Muslim society. And in the form of Muslims they have caused damage to Muslims.’ Noting that such Muslims have not disappeared after the prophet, he says that they will continue to engage in ‘anti-Islam activities’ till the Day of Judgement. His scorn is not limited to liberal Muslims of the atheistic kind, but also to practising Muslims of the reformist type. He notes that such persons ‘in the garb of Muslims’ mislead Muslims against Islam.

Rahmani’s article creates an intellectual environment in which Islamism, and its armed version jihadism, thrive today. Reading such articles in the Urdu press, many impressionable, uncritical and unsuspecting Muslim youths develop deep animosity against any kind of reform in Islam and end up becoming sympathetic to the messages of jihadi groups. Outlining anti-democracy arguments, the author notes that munafiqeen work against Islam being the religion of the state. ‘The attempt [of the coup] that has been made in Turkey is the continuation of the same munafiqana tehreek [movement of the munafiqeen underway since the prophet’s era],’ Maulana Rahmani explains.

The author praises Erdogan for nurturing Islamism in Turkey. ‘He revived the Turks’ Islamic character as per their wishes. Here the Arabic script was banned. The publication of the Qur’an was banned [perhaps in Arabic script]. The use of hijab by women was banned. Keeping beards was not allowed. At one time, there was a ban on aazaan [the mosque’s call to prayer], and also on the recitation of the Qur’an in Arabic,’ he writes. Although the article is primarily against liberal, secular and reformist Muslims, he notes that ‘secular’ Turks too accepted Erdogan because he improved the Turkish economy.

Reading the article, one develops a sense that munafiqeen are those Muslims who oppose hijab and religious orthodoxy, favour democratic values and women’s liberties, and advocate the neutrality of the modern state in religious matters. If these are the characteristics of munafiqeen, it may be time that from the next census, reformist Muslims of India should declare this as their religion and have it recognised by the Indian state.