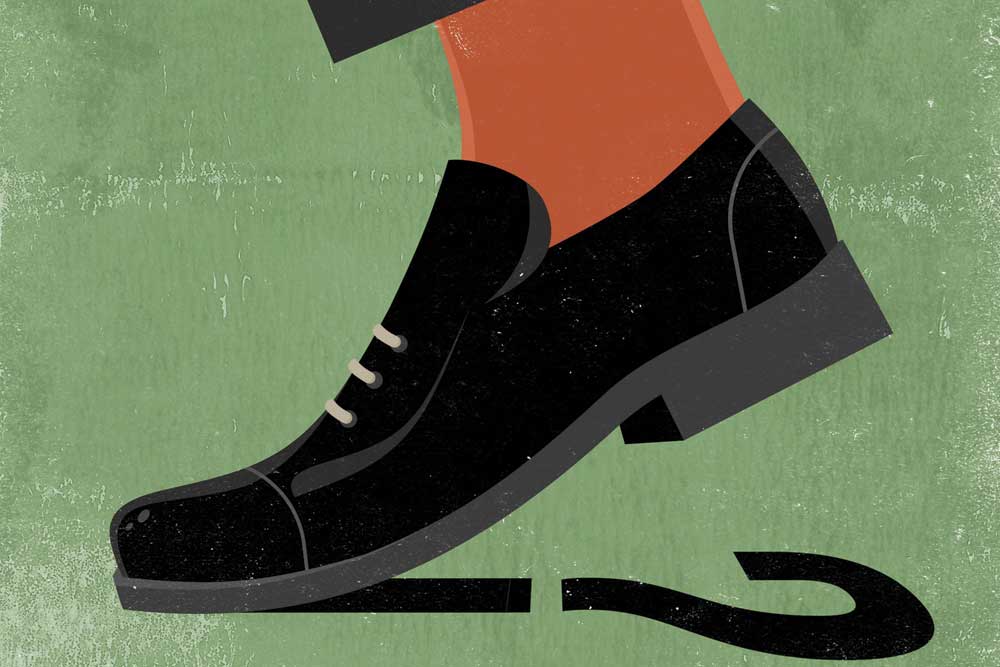 IT WOULD BE WRONG to suggest that urban Indians don’t walk. We are, after all, one of the world’s largest consumers of fitness trackers. The hospital gyms, basement gyms, athletic gyms, 24-hour gyms and luxury hotel gyms that form the bulk of our Rs 85,000 crore fitness industry, all have one piece of equipment in common—the treadmill. And there’s seldom a neighbourhood park that isn’t patronised every morning and evening by a string of walkers and joggers who huff and puff their way from the car, all along the walking track, and then back to the car again. Nearly 70 per cent of those who walk and exercise also take wheeled transport to their chosen fitness centre, even if it is less than 1 km away from their homes, says a 2016 study by Delhi-based Alliance Fitness Consultancy. So while we might shell out big bucks for an ultra-sensitive Fitbit and a pair of waterproof-lightweight-padded walking shoes, all for a chance to stretch our limbs, we don’t really walk.

“It’s the culture of walking that’s missing,” says Rohini Dhingra, a former trainer with Fitness Finesse Delhi. “Indians think of walking as a necessary evil, something that has to be done to lose weight or to travel. If there’s an option to avoid walking, they’d happily take it.” Last year, Dhingra had tried to set up a ‘Walk to Work’ group in Delhi, hoping to encourage people to take to the streets if their work place was less than 3-4 km away from home. Only a handful of people signed up. And then everyone backed out. She tried again in January this year to set up a heritage walk club. “The plan was to meet at various historic places in Delhi, of which there is no shortage, and walk around exploring the area with no guide or purpose, just our senses. I had a couple of expats and tourists sign up. Every week maybe 10-12 Indians would turn up, but they’d usually drop out before the walk was over. The feedback I got was that the walk was too long and aimless,” says Dhingra.

Last month, she finally decided to start a neighbourhood evening walk club at Delhi’s Jahanpanha Forest. For this, there were more than enough takers. “The irony is that the distance walked was the same as some of the heritage walks. But I guess it’s all in the packaging. Walking isn’t viewed as something to be done without a purpose—if it’s for a purpose and there are zero alternatives available, then, and only then, do people walk.”

Unfortunately, a growing number of alternatives to walking (from doorstep e-rickshaws and e-cabs to car sharing and proposals for footpath travellators) have made it the least-picked activity for urban Indians. Of the 46 countries studied by Stanford University earlier this year, India ranked 39th in terms of average steps walked. The study, which was published in the journal Nature earlier this year, surveyed close to 700,000 people and found that Indian men clocked a daily average of 4,297 steps, while women walked 3,684. The countries that performed worse than India included Indonesia, Saudi Arabia and Malaysia. China, and more specifically Hong Kong, emerged as number one.

A more recent study by the National Institute of Nutrition in India (which functions under the Medical Council of Indian Research) found that less than 28 per cent of urban men and 15 per cent of women walked a significant number of steps every day. The report, published in the first week of October 2017, covered 171,928 respondents across 16 states.

“Inactivity in urban life is hardly surprising any longer. It starts with children as young as 10, who are used to being driven around for even the shortest of distances. Schools need to play a greater role in encouraging students to view walking as an essential part of life and health,” says Dr Anoop Misra, chairman of the National Diabetes, Obesity & Cholesterol Foundation.

Hyderabad-based yoga instructor Shinoj Varghese feels there is a lot to be said for walking, but few of his students agree with him. “Of the 20-30 people I teach, everyone of them advocates leading a healthy life. Yet, every one of them drives to the class or takes public transport. The ones with chauffeurs would rather wait 10 minutes extra in a traffic build-up to be dropped at the entrance than walk the 100 metres themselves,” he says. “If walking is something you bring yourself to do because you enjoy it, then you’ll start to see the sheer beauty of being free from the confines of a steel machine.” Despite his endorsement for walking, he too prefers to commute on his motorbike. “It’s unhealthy and tiring, I hate it. But sometimes there is no option because pavements barely exist on some roads. Choosing to walk is like sounding your own death knell.”

THE SAD STATE OF pedestrian facilities (lack of safe crossing points and guard rails, crumbling pavements and open manholes) seems to be among the reasons for our collapsing culture of walking. Most urban city planners believe that walking is not the most sought-after mode of travel and hence does not need much attention or public space. Even the Oxford dictionary cites the meaning of ‘pedestrian’ as ‘Dull; uninspired’ and the situation has indeed come to such a sorry pass that footpaths are often put in place as after-thoughts, a task that requires little creativity and design skill.

In their paper ‘Pedestrians at Crossroads: A case study of Bangalore’, authors Sudhir and Seemara Kumar write on the failure of walking infrastructure in the city. ‘The crossing locations should provide for safe and comfortable movement. In India, the two types of crossings i.e. at- grade and grade-separated, are provided exclusively based on traffic intensity.’ The authors conclude that footpaths and crossings, while important, won’t by themselves make streets more pedestrian- friendly. The environment, indeed the culture of walking itself, needs to be reinforced both in the media and the public domain through positive campaigns and safe streets.

Last year, Bengaluru decided to do something about the 5 million cars choking its streets and air. The plan was to put a large sum of money (Rs 7.5 crore for every kilometre of road laid) into improving pedestrian infrastructure, thus letting people take advantage of the city’s walker-friendly weather and leave their cars behind. The planners, city-based Jana Group, gave several interviews to the press insisting that wider pavements for walkers (some as wide as the traffic lane itself) would convince more people to walk. Yet, now that nine of these so-called TenderSure roads have been completed, vehicular traffic shows no signs of thinning.

“I’d love to be able to walk to work, for meetings or just to buy groceries, but I worry about safety on the streets,” says Bengaluru- based journalist Preethi Thomas. “Walking is an environment- based experience. With lawless traffic trying to skirt past you, horns blaring every other minute and pollution levels on a steady rise, the pleasure of walking has been diluted. By making footpaths wider, it doesn’t necessarily make them immune to eve teasing, water logging and traffic-related deaths.” As if to prove her point, the concluding monsoon season has left Cunningham Road, one of the TenderSure project’s flagship roads, completely waterlogged and hazardous to those who might have initially been lured by its painstakingly-laid gleaming cobblestone kerbs.

Local community planners in Chennai seem to have had better luck in getting people to embrace the culture of walking. For starters, the city’s schools and universities opened up their gardens to the public. Madras Christian College, Don Bosco School, Mar Gregorios College and Pachaiyappa’s College are home to a large number of trees, leafy footpaths and sublime green vistas. But to avoid it from becoming just another morning-evening-walker project, community walking clubs are hard at work to the idea of walking a cultural mooring. Some members of the 150-year-old Harrington Road Walking Club, for example, frequently distribute inspirational quotes on walking in the hope of reminding people that it was once more than just an act of moving one’s body. It gave people clarity of thought, it was a muse for writers and poets, it sparked off romances and aided secret rendezvous, and even helped set off rebellions. It’s not uncommon to find a walking enthusiast or two pinning up flyers with quotes by Thomas Jefferson, Rosamund Pike or Ellen Degeneres on the reliability and meditative attributes of walking.

“We are the nation that walked to fight for our rights. How can we allow that culture to vanish from our collective memory?” says 27-year-old Elina de Souza, a member of the Chennai Walking Club. “I remember a quote from German philosopher Friedrich Nietzsche where he declared ‘Only thoughts conceived while walking have value’. It was only when I recently switched from taking a bus to walking to college did I realise what he meant. I never noticed the surplus of cats on one particular street, that the local paanwala wore Adidas sneakers, or that a huge graffiti [message] was being painted on a wall. I find myself walking more and more now.”

Sometimes not having a choice can also do the trick. A month ago, at the Elephanta Island off the coast of Mumbai, the toy train that takes passengers from the ferry to the ticket counter was out of service. Groaning and grunting, the 50-odd passengers and I set off to conquer the 1 km stretch on foot. One child caught her first butterfly, another kept stopping to play in the sand, while an elderly couple fed the remains of their lunch to a village goat. The smoke from the train was long-gone, allowing a clean breeze to blow our sweat away. When we reached the entrance to the caves, one of the women (the heftiest one of us, who had also been the angriest to learn of the toy train’s failure) wondered out loud why the train exists at all. On our way back, the train was working. But no one took it.